In gloom we Trust at Wrongbar

Saturday night, Wrongbar was body-to-body with Trust fans, friends and VIPs who, mostly garbed in black, had come out to celebrate the band's LP release. Just before 1:00 a.m., fog descended over the bar and the house's pumping ebm faded out. 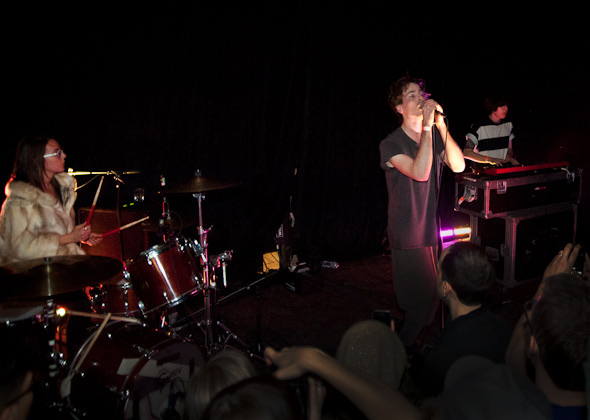 It's been years since I saw Alfons play live — I remember him in small Toronto bars and cafes alone at a keyboard, magic voice wavering between baritone and falsetto — and Trust represents a profound change of pace for him. Song after song, Alfons moved moved with his eyes rolled back, pushing emotion through dead and tinny vocals. Austra's Postepski is a forceful machine at her drum-set and may be the backbone of the band, but it was Alfons's uncanny intensity that carried Trust through the night. 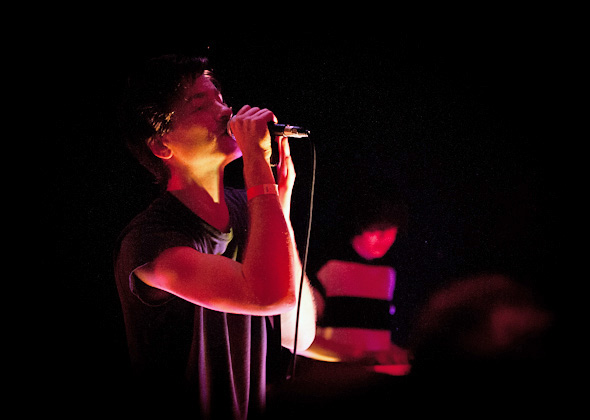 It helped, too, that nearly everyone in the room knew all the material. I heard names of songs announced by fans seconds into beats and synth lines, and with each song the dancers on the floor came more unhinged, while Trust played through their album, close in the intimate venue yet distant at the same time.

Although the music and scene at Wrongbar suggested a high energy goth rave, Trust could be the band playing in Christiane F or Wings of Desire: films where the sad coolness, listless energy and passioned disfunction emanating from the artists on stage exist most strongly as part of a larger portrait, made by the individual dramas of the lost, distracted people in the audience. By the time the fog pumped again at the set's midpoint, the band seemed secondary to the energy of the crowd. 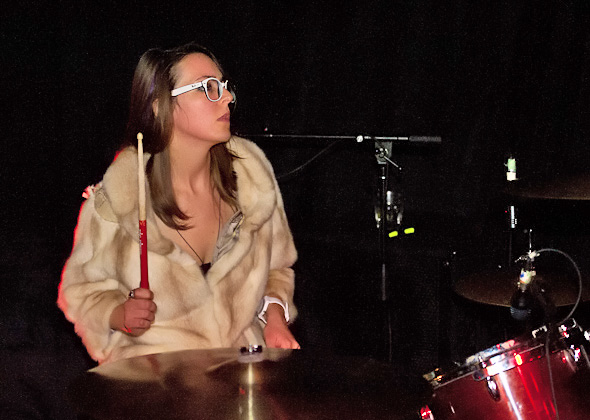 Trust's exit to the last echos of Sulk's synth line reminded me of Salem's short, encore-less live shows and detached, reluctant stage personas. I'd been expecting a little bit of joy mixed in with the gloom (I find their recordings gothy but playful), but Trust's dirty, withdrawn front appears half born of genuine cool, and half of necessary aloofness; their debut album is blowing up in every way. I hope Trust someday loosen their grip on darkness and occasionally embrace the ethereal, Cocteau Twins heights I think they're capable of live, but I'm still haunted by Alfons's eyes, strange dance moves, and the night's powerful atmosphere.