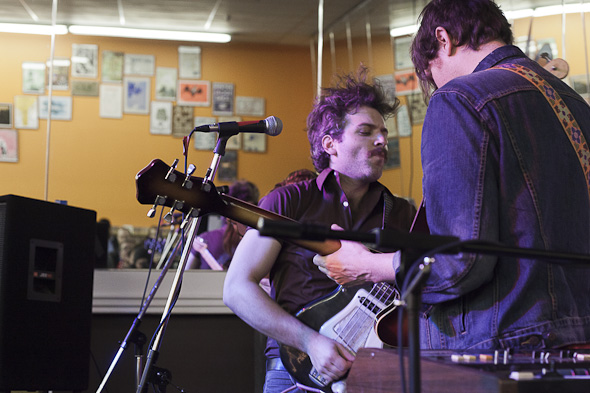 While Toronto's many participating clubs were by no means slouches in terms of sheer number of bands performing as part of Canadian Music Week, equally compelling programming was scheduled at free daytime showcases in unconventional venues all over town. Having been witness to Friday afternoon sets by local acts BADBADNOTGOOD and Army Girls at Sonic Boom and the Toronto Institute for the Enjoyment of Music respectively, my expectations were high heading out to catch Zeus play a mid-afternoon set at the venerable Annex record store.

It's fortunate that the store, having somewhat recently relocated to a space inside Honest Ed's, possesses such expansive floor-space and a high stage. This ensured a decent vantage point for every patron who came down to check out the Toronto-based band. Luckily, Zeus didn't disappoint the sizable crowd they drew. 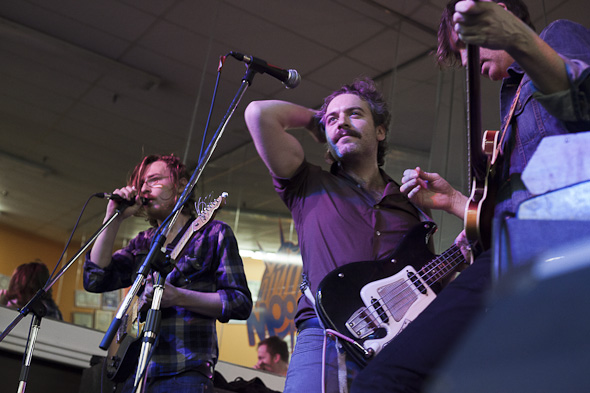 Having played the Horseshoe the night before as one of the most anticipated acts of the annual Arts & Crafts CMW showcase, the members of Zeus showed no signs of fatigue as they previewed tracks from their second LP Busting Visions out on Tuesday. Their familiar brand of roots rock draws many points of comparison — you've got your dash of the Band here, a bit of Sloan there — but the way in which each of its three songwriters integrate their individual material into the group's sound as a whole creates a subtle contrast that fleshes out their cohesion. Combined with the band's natural showmanship on stage, Zeus' brand of no-nonsense rock translates effortlessly to a live setting, even if they and the audience were a little hungover from the night prior. 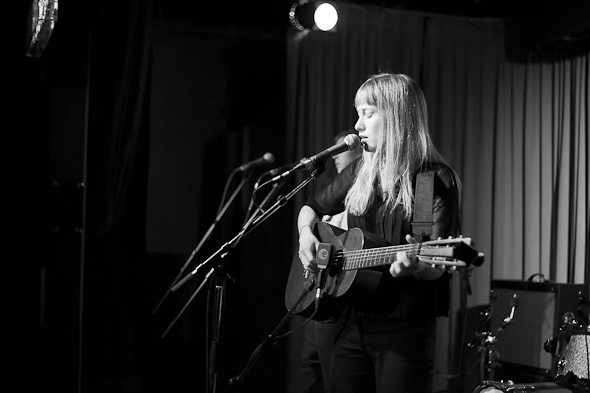 It seemed unfair that on a night with a lack of notable scheduling, at least compared to Thursday and Friday of the fest, The Weather Station was given such an early timeslot, serving as opener of the Drake's Pop Montreal showcase. To add insult to injury, the beautiful-yet-concerning heat wave that had unseasonably swept Toronto came to an abrupt halt midday, and by the evening had transformed into pouring rain and biting wind.

All of this amounted to a sparse crowd when Tamara Lindeman, alongside a few of her bandmates in Toronto collective tour de force Bruce Peninsula, took to the Drake's swanky stage for an understated set of fragile, occasionally haunting folk tunes.

Still supporting last summer's excellent sophomore release All of It was Mine, the Weather Station is essentially made up of Lindeman and a few collaborators who serve to embellish her bare-bones folk without needlessly complicating it. About half the set was performed solo on either banjo or a particularly rustic-looking acoustic guitar, Lindeman playing the storyteller as she rolled out pastoral semi-narratives that captivated the criminally small crowd. 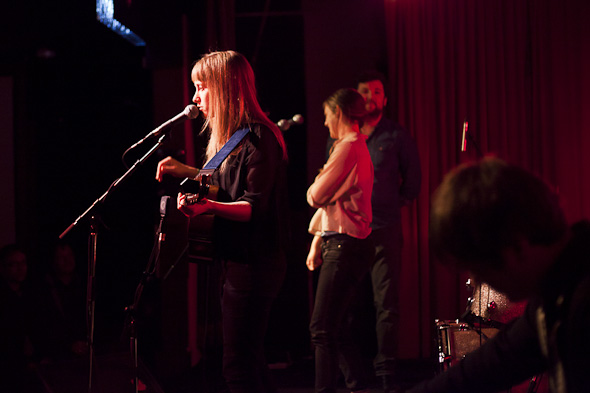 Sporadically throughout the set, she was joined by Bruce Peninsula members Matt Cully and Ivy Mairi on backing vocals and Andrew Barker on lap steel. While the intimacy of the solo tracks possessed a disarming immediacy that drew the crowd in, the atmosphere gained from the extra accompaniment didn't hurt Lindeman's songs either. Eventually joined by ex-Attack in Black member Ian Kehoe on a pared-down drumkit for a few numbers, Lindeman's subtly affective songs and wide-eyed confidence onstage made for a great set that that at only 30 minutes left the audience wanting more. 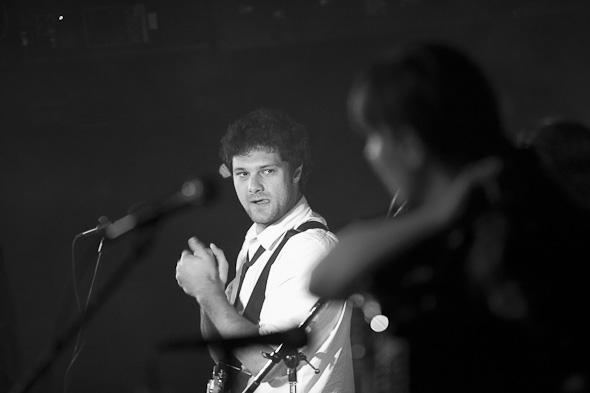 Well, this is awkward, in over of a year of writing for this site, I've never written about a friend's band. Obviously I'm predisposed to like the band, but I'm being honest when I say that what I saw from Rebel Rebel was promising. The group is recently formed, having only played their fifth show on Saturday, but they already have a good sense of what works for them. The band describes their sound as faux Foo Fighters, and while that's an apt description, it doesn't fully describe their sound, as the group also includes a synth player — criminally underused in some songs, however. There's some kinks to work out still, but I'm excited to see what comes from this project. 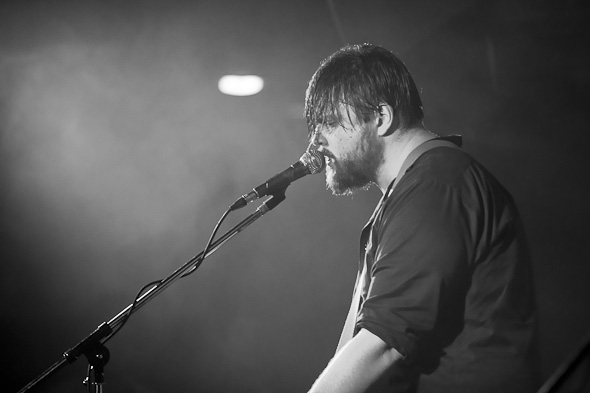 After seeing my friend's band play, it was off to the Garrison to check out all the bands that Brendan Canning had helped assemble for his showcase. As I entered the venue, the powerful voice that assaulted me had me thinking that some banshee queen had come to punish me for all the women that I had wronged in my life. Instead, it was lead-singer Jacquie Neville and the rest of The Balconies sounding far more like a hair metal band than I care to remember; they looked the part, too, as the visual aspect of their set was as much wild hair, tight leather and ripped clothes as it was frantic guitar strums. It takes a gutsy band to touch that 80s sound, and an even better band to make that sound fresh and exciting. The Balconies did both. 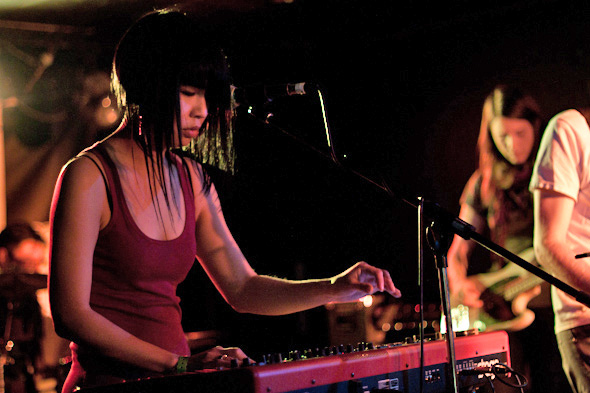 Saturday night, Toronto-based buzz band Papermaps played at Hard Luck for Canadian Music Week. The first Papermaps album was recorded over two years by singer/producer/guitarist Dean Marino when his studio, Chemical Sound, wasn't booked by bands like Tokyo Police Club and Born Ruffians, and was one of the most talked-about local releases last year. Stacked with tracks like the single 'Reunion,' the impeccably-produced self-titled album

Papermaps went onstage with a set full of unreleased material as well as the most well-known tracks from last year's LP. Their sound was (as expected) polished and tight, with the band ably pulling off some of the subtle complexities, such as the vocal harmonies, that made their album stand out so much last year. 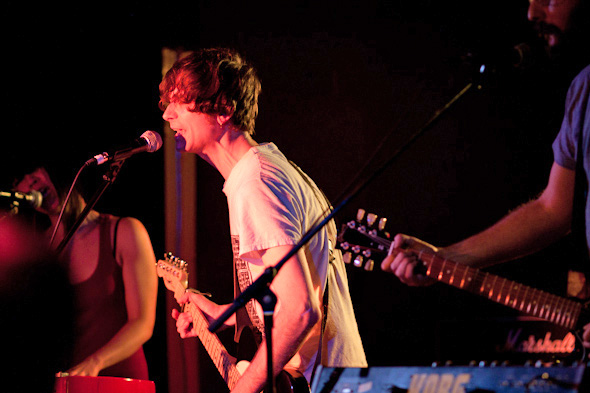 The real story's in the new songs, though. Fans of the band owe it to themselves to go see them live and hear the new material, in particular the song 'Reaction Formation.' I mean, damn. It's pretty obvious that Marino is both an expert producer and a perfectionist, a dangerous combination that no doubt contributed to the first record taking 2 years to make it to audiences. But with the recent accouncement that Chemical Sound will be closing to the public, it seems he's taking more time to work on Papermaps, and that's great news for everyone concerned. This band is killer. Here's hoping for a new record from Papermaps in the near future. 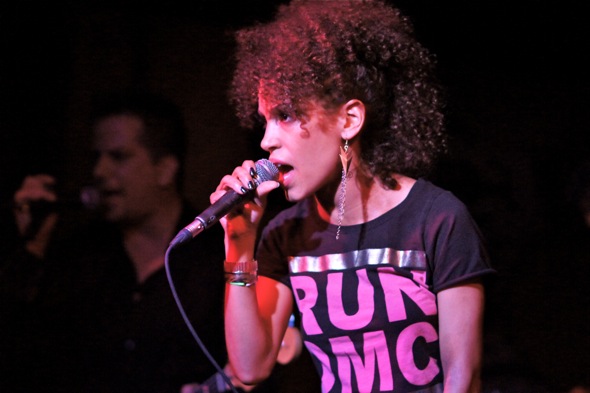 Mamabolo and The Hippy Mafia got my Friday night grooving at Velvet Underground for the third night of Canadian Music Week. Led by singer Barbara Mamabolo, this seven-piece Toronto-based group had me from their first song. Their tunes are led by a solid rhythm section and punctuated by two saxophones. 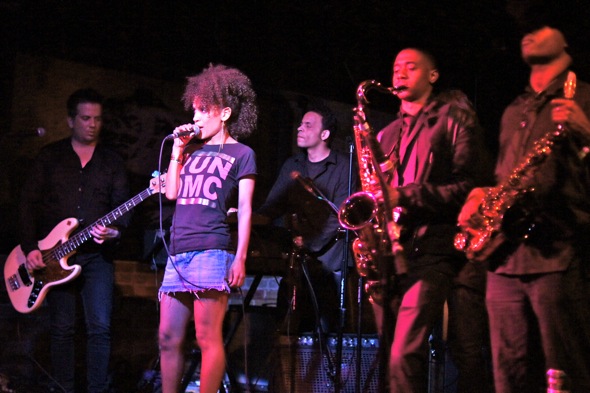 Mamabolo set the tone and vibe for what was to follow. 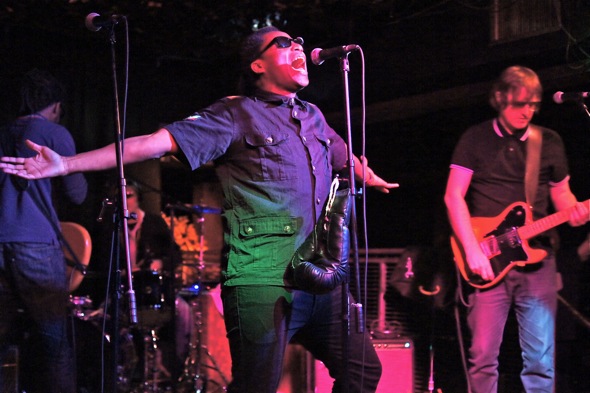 The night got funk-ified quickly once The Hippy Mafia took the stage. Led by a singer/MC who wasted no time in getting the crowd on their side. Arms wide and flailing, encouraging everyone to dance from the get-go. 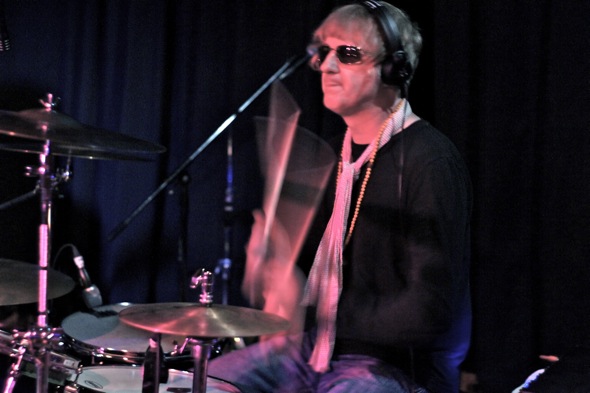 Gary "Gaz" Whelan, who was drummer for The Happy Mondays, played it cool at the back of the stage. 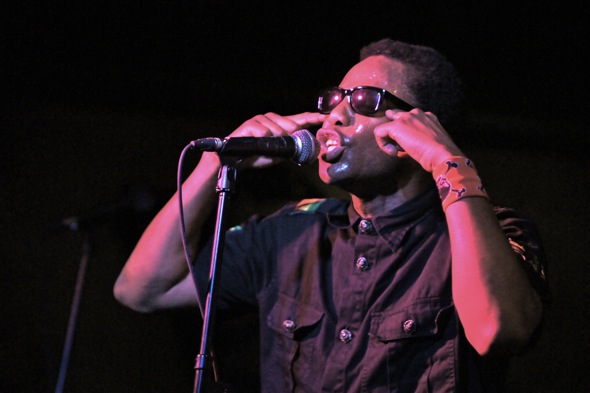 But his influence was certainly felt, with more than a little resemblance to the Manchester sound mixing in nicely with a heavy dose of blues, soul and funk for good measure. 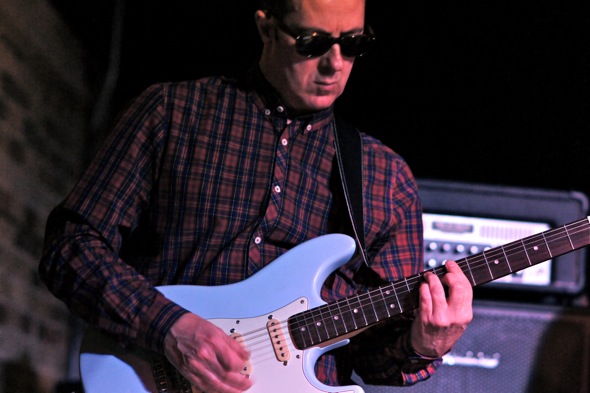 I've never seen a band quite like this one. They fuse all the right elements of a party band, led by an almost over-the-top front man and backed by some serious psychedelic pop-funk. 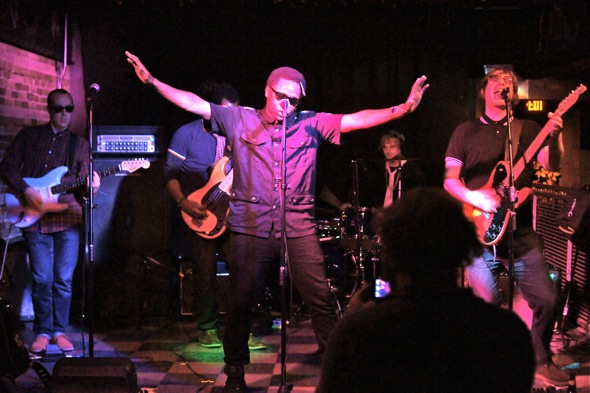 This show was one of my highlights of Canadian Music Week for sure.

Writing and photos by Roger Cullman. 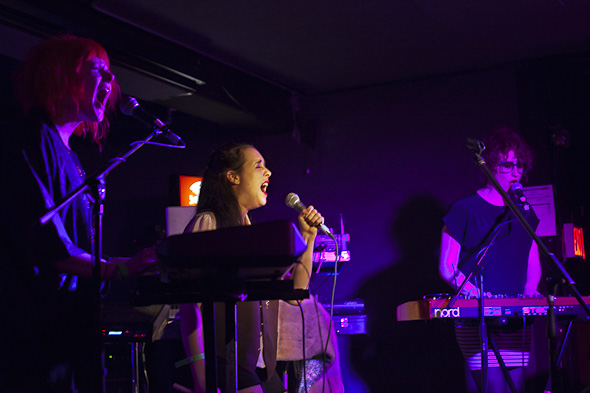 Somewhere between CMW 2011 and CMW 2012, the multi-talented Allie Hughes must have realized what Katie Stelmanis discovered a year prior. That is, the formula for how a classically trained singer can obtain success in the indie world, which is as follows: 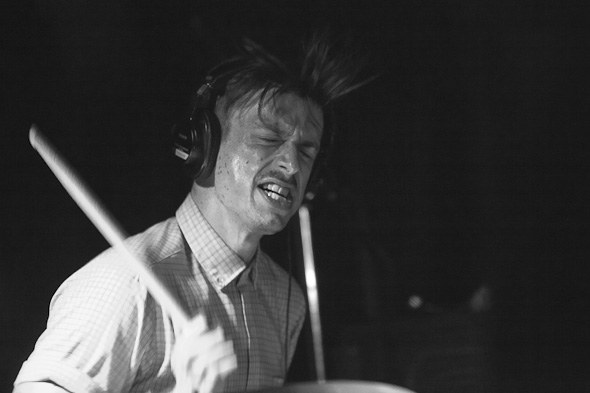 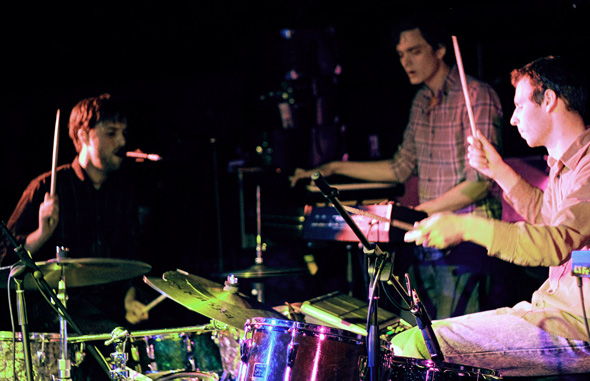 Well, here was the big surprise of the festival. Absolutely Free — a new band made up of 4/5ths of local experimental noiseniks dd/mm/yyyy — absolutely killed it at a late-night Comfort Zone set. Not that it should have been a surprise, as dd/mm/yyyy had more than proven their mettle over the past decade or so before officially calling it quits on 11/11/11 last year with one final show at the Bathurst Centre of the Arts.

With all members save for vocalist/multi-instrumentalist Tomas Del Balso immediately reconvening as Absolutely Free, Saturday night's set served as one of the first ever for the new incarnation of the band. If anyone had any doubts about their ability to live up to the shadow of dd/mm/yyyy, they turned out to be unfounded as Absolutely Free delivered a stunning, hyper-kinetic set of spastic psych-rock that noticeably blew away those who stuck around to see them. 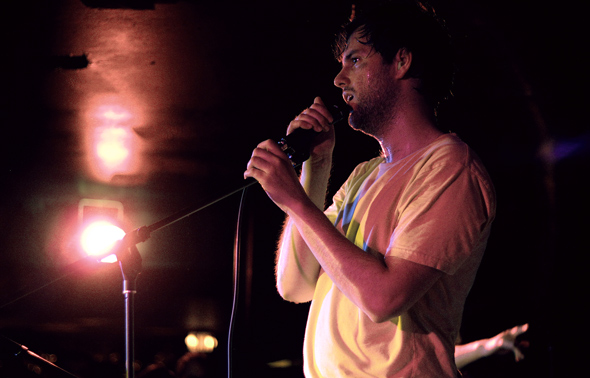 With the vast majority of vocal duties left to drummer and sometimes guitarist Matt King, the band's sound leaned more to the slightly accessible than that of their former act. This isn't meant to be reductive — despite the relative verse-chorus-verse structure that seemed to dominate most of their songs, chord changes and sonic nuances were unpredictable throughout, giving the band an off-kilter pop edge.

Material this technically complicated wouldn't normally be thought to translate so fluidly live, but it certainly did here, with band members frequently exchanging instruments and impressing with each change. While I had always enjoyed and appreciated dd/mm/yyyy, I'm excited to see the direction Absolutely Free take after honing their craft in the studio later this summer. With live shows this impressive from the onset, though, myself and the many dd/mm/yyyy fans out there shouldn't have too much to worry about.