CMW Day 2 at the Great Hall & The Cameron House

It was a good feeling to begin the second night of Canadian Music Week festivities relatively early at the Great Hall and enter to find the venue almost completely full. True, it could've been because the show, featuring headliner John K. Samson & the Provincial Band, was one of the night's hottest tickets, leading the ticketless to make the jaunt out early to try their luck at getting in.

However, I prefer to think it's because those in attendance were aware of what an engaging performer and talented songwriter Jim Kilpatrick, better known as Shotgun Jimmie, has become in recent years. Ever since the demise of the beloved Shotgun & Jaybird in 2007, Kilpatrick's set out (mostly) on his own to release a series of LPs, EPs, and split singles, earning him a national fanbase and the distinguished title "Prince of Sackville, NB" by Samson. 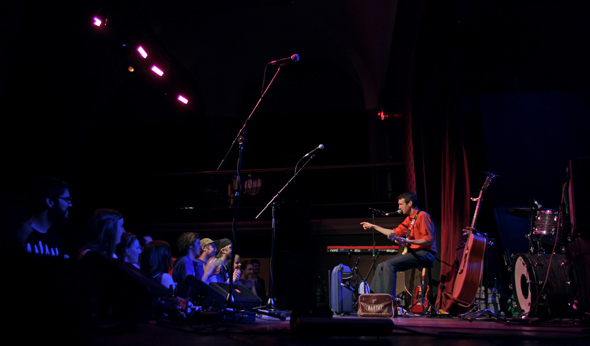 This is not to say that he performs under this name as an act; rather, Kilpatrick's affable personality and authenticity come out in his live shows, where he performs as a one-man band - mangling a guitar while simultaneously carving out impressive rhythms with two kick drums. His songs can be humorous, but often stress a fundamental enjoyment of the inevitable potential mundane, such as on the hook-laden "King of Kreuzberg," one of the only rock songs in recent memory to mention blisters on one's fingers from doing laundry.

He opted to test out more than a few new songs, many of which stuck with the successful brevity of the Shotgun Jimmie format - hey, if it ain't broke, don't fix it - with one notable exception, a spacey new track that served as the set's highlight. With repeated mentions of climbing mountains and, unusually for Shotgun Jimmie, prominent vocal reverb, the new tune (as well as the rest of the new the material of the set) was an exciting preview for where Kilpatrick will take the project next. 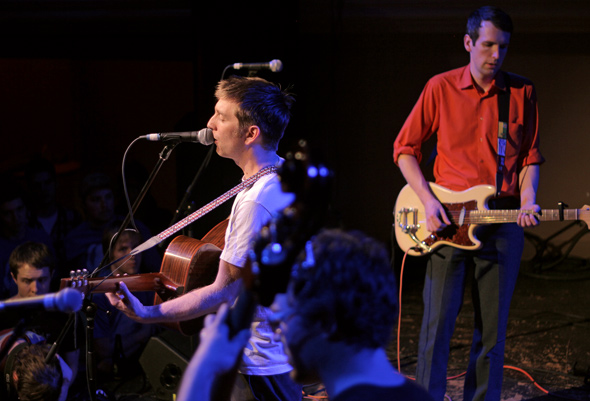 Jim Kilpatrick would later take the stage alongside the Weakerthans' frontman John K. Samson, playing double-duty as lead guitarist of the three-piece Provincial Band, also featuring Doug MacGregor (formerly of Constantines fame), and Doug Friesen. The ensuing 65 minute set would function as a showcase for the many highlights of Samson's long, varied musical history, beginning with a number of new songs off his first proper solo LP, Provincial, and progressing through tunes as primary songwriter for Winnipeg heroes the Weakerthans and brief stint as bassist/occasional vocalist of classic punk band Propagandhi.

While the packed house was certainly receptive to the first few Provincial songs that kicked off the set, it was when the band took a brief break leaving Samson onstage for a solo acoustic rendition of Weakerthans' classic "One Great City!" that the crowd was noticeably hanging onto every lyric with absolute attention. More stripped-down versions of some of the best Weakerthans' tracks followed, much to the excitement of the audience, and the band carried this momentum until the end of the show upon their return to the stage for a final six songs. This included the older solo song "Petition," advocating for the induction of 'Riverton Rifle' Reggie Leach, also from Manitoba, into the Hockey Hall of Fame (hilariously retitled "www.ipetitions.com/petition/rivertonrifle/" on Provincial). 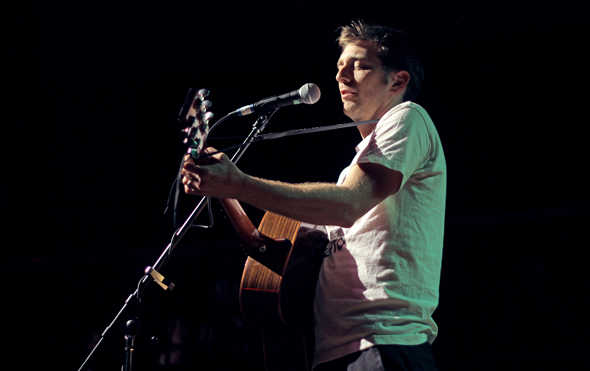 Other highlights of the set included an enthusiastic take on Jawbreaker's "The Boat Dreams of the Hill", Doug MacGregor's relentless kit-pounding acting as a pressing reminder of how sorely missed the Constantines are, and an unplugged, solo acoustic version of "Virtute the Cat Explains Her Departure" that closed out the encore. A significant portion of the crowd kept time by stomping on the floor, and the way in which this accented the ebb and flow of the song noticeably impressed Samson. With his lyrics accompanied by nothing other than an acoustic guitar, the stories told in his songs make themselves a good case for the title of Canada's musical poet laureate. Augmented by a crack backing band, though, it's apparent that Samson's just as effective and engaging as a frontman. 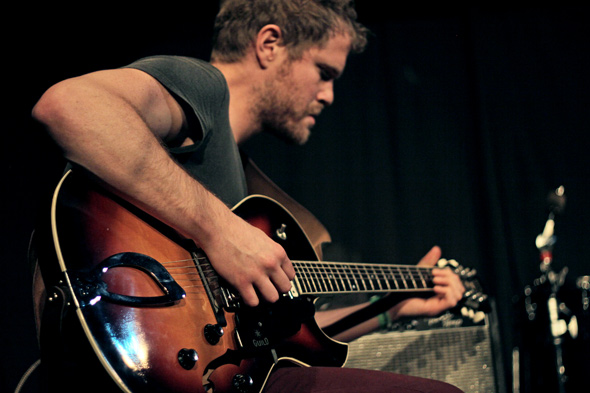 The Manitoba motif wasn't done with upon leaving the Great Hall; a short trek down Queen Street to the legendary Cameron House rewarded a set from Lake Forest, the new solo project of Will Whitwham, singer/songwriter of the locally based the Wilderness of Manitoba. While Whitwham's songwriting was evidently strong, replete with intricate fingerpicking and pastoral imagery reminiscent of Kristian Matsson's the Tallest Man on Earth project, the set's reliance on the quiet and subtle occasionally resulted in a lack of dynamics. While the songs never dipped in quality, I found myself wishing that more of the 50 minute set was played on the hollowbody Guild electric Whitwham brought out for the last three songs.

That said, many of the new songs Whitwham played were fantastic, and the set maintained a consistent flow throughout its entirely. Towards the end of the night, Whitwham introduced an Elliott Smith cover, XO's "Waltz #2," and while covering such an esteemed songwriter can sometimes be a daunting challenge, Whitwham's rendition was faithful, his higher register making Smith's subtle vocal nuances a little more obvious but no less affecting. Ending the night with the particularly rousing original "The Autumn Sun Will Set the Land on Fire," the tension present in the set was finally able to air out, culminating in Whitwham looping a crunchy chord progression to allow for some tastefully distorted guitar squalling. It was a satisfying conclusion to a solid night of Canadian talent.