The Asteroids Galaxy Tour fly through the Hoxton

I was a little apprehensive to hear songs like 'Lady Jesus' from 2009's Fruit going in last night. After all, the Asteroids Galaxy Tour's sound on record is nothing short of arresting: huge drums, horns and hooks placed carefully on top of one another, beautiful and intriguing, but layered in such a way that's difficult to duplicate out of studio.

Songs like that — where the studio magic of reverb, guitar effects and layered samples feature prominently — are very difficult to pull off live. Frequently, bands make compromises to the touring versions of songs that render them nearly unrecognizable when compared to the original versions. The Asteroids Galaxy Tour, though, performed surprisingly well in that regard — with only four other musicians, Mette & Lars were able to recreate almost all of the texture that made their last record so captivating. Songs like "Push The Envelope," with the most varied and scattered instruments and parts to be found, didn't suffer a bit from being taken out on the road — incredibly, the band was actually able to approximate the huge, brash horn lines from that song using only one each saxophone and trombone. 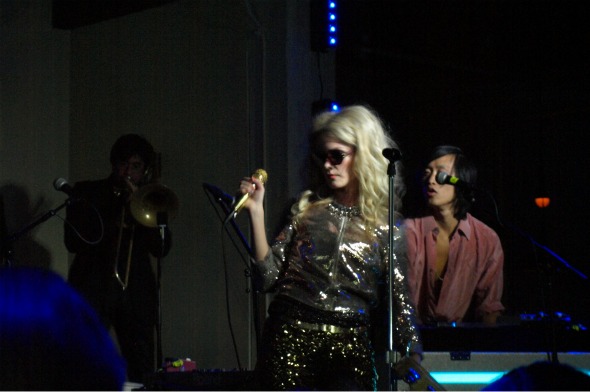 When they finally kicked into their first single "Around The Bend" — otherwise known as the song from the Apple ad — the crowd, to put it mildly, went nuts. The difference in the audience response when the band played songs that had been featured on commercials or Gossip Girl was quantifiable — clearly, this is a group that gets a lot of exposure through placement of their work in ads and soundtracks.

Having recently released a new LP in Out Of Frequency, the band's setlist was heavy with new content — singles like "Heart Attack" sat very well against older tunes, like "The Sun Ain't Shining No More." The new songs stick fairly closely to the accessible fun of Fruit, sure to charm audiences once the tunes get a little more airtime.

The Hoxton proved a good venue for this bill, with a crowd that was apparently so stylish that it prompted the openers, Philadelphia's Vacationer, to blurt "you guys look really good," in a slightly awkward but endearing fashion. 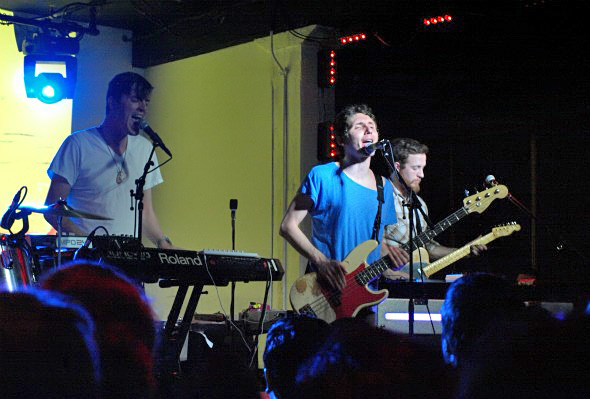 A four-piece modern pop ensemble who were definitely a little intimidated by the room, Vacationer nonetheless put in a solid, danceable set to get the audience moving before the headliners took the stage.

It was an impressive showing for a Monday night, and it's easy to see why The Asteroids Galaxy Tour were able to catch the attention of the late Amy Winehouse and other music industry heavyweights the world over. When those people take note of a band — not to mention Apple's ad team — audiences end up listening.