The Holiday Crowd is a local four-piece band - Dave Barnes (drums), Colin Bowers (guitar), Imran Haniff (vocals), Alex Roberts (bass) - whose easy-sounding, catchy melodies are easy to love. Their new album Over the Bluffs lends itself to a familiar sound, with its English folk-rock aesthetic. And yet the group's songs whoosh with dance and sun-stroked vibes.

In this week's interview, we caught up with Colin and Imran to talk about the band's new album, their memories of growing up in Scarborough and their romance with the bluffs.

What is it about the bluffs - romantic or not - that make this particular Scarborough spot the inspiration for your new album Over the Bluffs?

Colin Bowers: The Bluffs of Scarborough are at once beautiful and eroding. There is a wonder and sadness in seeing something fade. A testament to beauty and love.

The Bluffs of Scarborough, England I had been to as a child with my family. Growing up in Scarborough, Ontario they were at the foot of my street. There was a danger too. Many houses were considered unsafe due to the eroding landscape and some had fallen over. It's also a place where lovers go, a sort of make out spot which has a sort of 50s retro charm. After watching Quadrophenia as a kid I'd imagine driving my scooter off the edge.

Imran Haniff: The inspiration for writing about the Bluffs for the song "Tiresome" came from Dave Barnes and I sitting in our rehearsal room and throwing some lyrics around. We were just thinking how nice it would be to make a reference to one of the most beautiful and dangerous areas in Scarborough. Like most places in Scarborough, such beautiful danger but the whole album isn't about Scarborough specifically. Experiences, yes... from Scarborough, definitely. "Pennies Found" isn't about finding pennies in a water fountain at the Scarborough Town Centre, but who knows? It very well could be.

How often are your songs inspired by setting?

Bowers: Our songs are inspired by setting only as much as we try to incorporate imagery into our lyrics. As a painter I like the visual aspects of songs. It allows people to be transcended. "Painted like a Forest" makes many references to WW2 with "footsteps across a roman switch line / In Courcelette you will find mine." Well we have never been there and no one has bothered to suggest we are writing about Belgium.

Haniff: Most of these songs lyrically are strung up phrases and sentences that Colin, Dave, Alex and I say to each other and I happen to find them fascinating and I write them down. It's from a feeling rather than a setting or place. There are lots of things and people that inspire the songs. Mostly it comes from love, drugs and a sense of entitlement.

This album has a very retro 80s/early 90s Britpop sound (Stone Roses, Primal Scream). What bands did you grow up listening to and which are your influences?

Bowers: I can't fully explain my love of English music. Dave and Alex both moved from the UK, whereas I was born here. I did move to Germany when I was quite young. Much of my early memory and experience is of Europe, and I did spend a lot of time in England as a child.

My first love of music came when I heard The Specials for the first time. I became a child Mod that day and maybe never really got over it. It was when I got to art school as a teen that I discovered the Jesus and Mary Chain, The Smiths, The Stone Roses, Echo and the Bunnymen and New Order, all of which were already well past their peak.

Haniff: I grew up listening to ABBA, The Beatles, Julio Iglesias, whatever my parents played I enjoyed it. My favourite bands and artists growing up were: Duran Duran, New Order, The Smiths. I listened to a lot of hip hop and house music, but I'm influenced by The English Beat and The Libertines. The Smiths and The (Stone) Roses are obvious.

Take a song like "Never speak of it again", which you've recorded/played since last year. Did you re-edit/rework this song to make it sound new on the album? Are you revisionists or do you feel when a song is done, it's done?

Haniff: "Never Speak..." was reworked. I think the drums sound better but nothing else seems to be too noticeably different. I'd love to rework "Painted like a Forest" and "Tender Age". We play those better now. Other than that we're ready to move on. We have loads more songs to record and we just want to keep pumping them out.

This song ("Never speak...") stands out for me. What's it about? What are your favourite songs from the album if you had to choose one or two?

Bowers: I think it is about letting go of something you once wished for perhaps because you were never able to express yourself in the first place. "The wish I wish I had" and "In the eyes which can't cry" both seem to say something of loss.

I think it stands out in part because it's got a great hook and great steady dance beat. I think there are things we would like to rework but we understand the importance of letting go. Alex Bonenfant did an amazing job really bringing out the bass and drums in the mix while keeping the clean lines of melody open.

Haniff: "Never Speak..." is pretty simple. Some things are best left unsaid, unmentioned. It's about hurting someone you care about and regretting it later or vice versa. But in the end you really do want to know because that's what caring is all about. Very simple stuff. My favourite from the album are "Tiresome" and "In My Arms." They're just very well played and lyrically special to me.

Tell us why new listeners should try Over the Bluffs and what they should expect at your show at Oz Studios on January 27th.

Bowers: I don't want to tell people to listen if they're not looking for something different already. For all the talk of us being a mere Smiths band people should reserve their judgement. After all it's not the rain that flattens my hair but the salt that spoils my shoes. People should expect to understand The Holiday Crowd from tea towels to deck chairs from Scarborough to Brighton.

Haniff: I think new listeners should have an easy time liking the CD but a harder time admitting it. It's not hardcore and heavy. It's not punk or hip hop but it's more punk and hip hop than anything I've heard in the last 6-7 years. That's why they need to hear it. It's the void missing in their lives.

We're a great live band. It's developed over the last year but we're more confident now. There's more of a groove going on without sounding like a straight up dance band. THC's rhythm section is unbeatable. 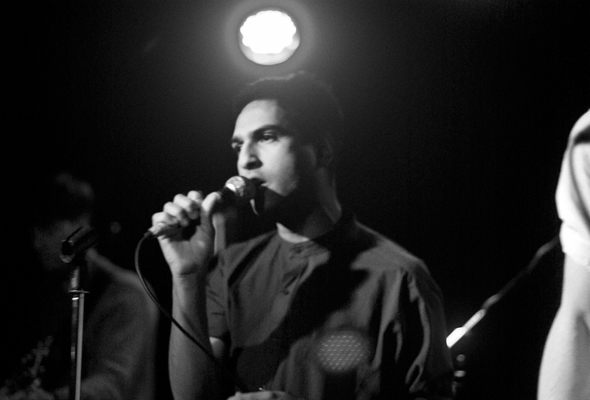 Where's your favourite place to hang out in Scarborough? And how about in Toronto?

Bowers: Well Scarborough isn't really a hangout any more. There really isn't much to bring me back other than to visit family. When I do go I am amazed at the changes. I don't think Scarborough has even begun to tell its story.

Haniff: I like to hang out and go for walks around the Don Valley and go bird watching, maybe ride my bike in the winter along the bicycle path looking for a warm spot to have a smoke and some hot chocolate.