Leaving the Great Hall on Wednesday night, my ears were still ringing from the intensity with which Fucked Up rocked the historic venue. Playing an uninterrupted (with the exception of a two minute break to duct tape the drum kit back together) live performance featuring all the material from their latest album release, David Comes To Life. The energy and enthusiasm in the room was palpable, leading me to wonder at one point whether the Great Hall might actually be named for the calibre of shows it hosts â well, at least for one night, anyway.

The venue had the same feeling as a youth night in my neighbourhood church basement where burgeoning local punk bands would play. In fact, as frontman Damian Abraham recounted to the audience, this observation isn't actually that far off. The Great Hall is an important location for the lead singer as it's not only the place he and his wife recently wed, but it's also the former residence of his father, who spent time her far prior to its current iteration. Wednesday night, however, it was home to Fucked Up and their fans as they headlined a charity show in support of COUNTERfit Harm Reduction Program and the Barrier Lake Legal Defense Fund. 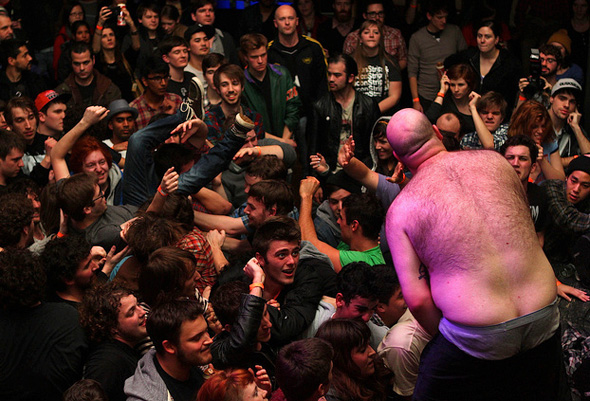 I mention the fans along with the band because they were an integral part of the show. Abraham created an interactive environment in which the audience was as much a part of the concert as the band was. He seemed to treated the audience as an equal, making sure to personally greet sections of venue, even the ones isolated on the balcony. And the fans repaid the favour with what was a times a wild frenzy of dancing and singing.

It was around "Turn The Season" that Abraham exposed his man-boobs and climbed onto the stacked monitors and then up and over the railing of the balcony. He then belted out in his guttural growl both "Running On Nothing" and "Remember My Name" as he made his way across the gallery. This is the stuff that memorable concerts are made of. You could feel the floor move on beat as the crowd bounced in unison to the rhythm of the band. 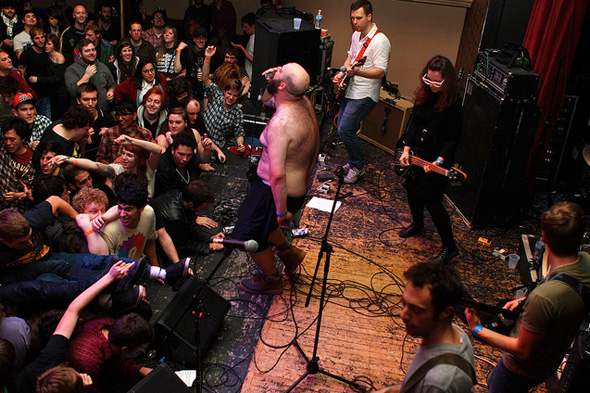 There was only one occasion when the crowd reacted poorly to the band, and that's when they announced that there were only two songs left. Trying to ease the masses, Fucked Up made a promise to give an encore performance. With the final song of that encore, the band closed out the evening in a festive manner with a rendition of "Jingle Bells" that brought the house down.