Austra gets seductive at the Phoenix

About halfway through Austra's homecoming show at the Phoenix on Thursday night, the band's lead singer, Katie Stelmanis, shared an interesting tidbit about the band's history: almost a year to the day of last night's show, the band had played its largest show up to that point at the Bovine Sex Club. Of course, it's hard to imagine fitting the band and its fans in such a small venue now, but that just underscores the kind of a meteoric rise Austra has experienced in a little less than a year. 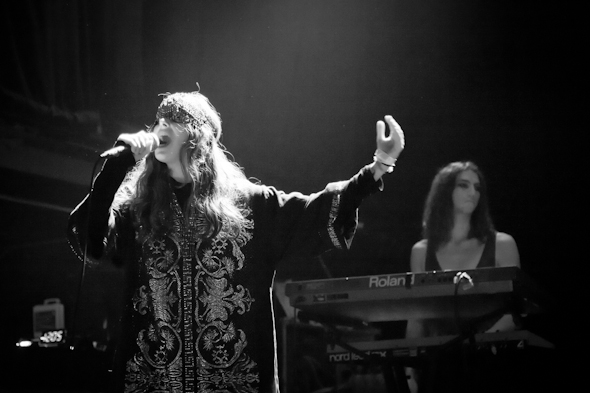 The band's set began close to midnight. After excellent performances by both opening acts â Tasseomancy and Young Galaxy, respectively â the first band members from Austra started to filter their way onto the stage. Stelmanis was joined by drummer Maya Potepski, and together the two started playing "The Beast." The stately piano melody that makes up most of the song beautifully resonated to the back of the Phoenix, and at this early juncture in the concert, it was possible to think for a moment that the occasion and setting was not an indie concert, but a piano concerto at Roy Thomson Hall. As the song progressed, however, and more of the band made their way onto the stage, the signature dark electronic elements that make Austra compelling to so many people started to slowly but inexorably transform the song. Austra had arrived. 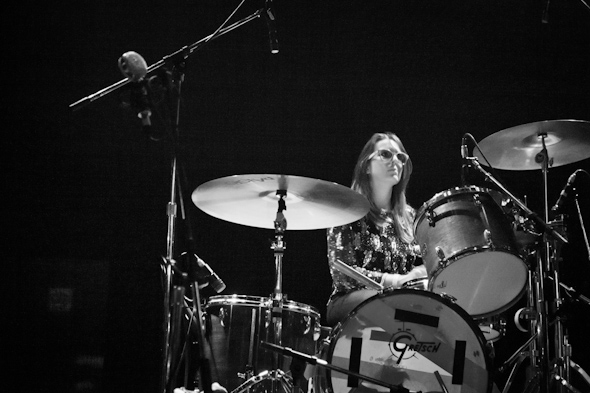 Without a doubt, Stelmanis is the heart of the band, so it was a bit of a concern when one of my friends overhead that the vocalist was suffering from a cold. Still, if Stelmanis was indeed sick, it was difficult to tell: she hit the highest and most difficult of notes with apparent ease. In fact, this is the second time I've seen the band, and both times Stelmanis was apparently under the weather, so I'm really curious to hear what a perfectly healthy Stelmanis would sound like. In any case, the classically trained singer has always managed to impress.

For the most part, the singer wisely saved her voice for singing, not saying much beyond thanks to the audience for coming out to the show. The one observation she did share with the audience proved to be somewhat divisive. According to Stelmanis, the band's current of stretch of touring has seen them in North America for the past five weeks. In that time, each city the group has visited has had its own offshoot of the Occupy movement. This observation drew amused cheers from the crowd, then, however, Stelamis went onto say that the band totally supports what the movement is doing here in Toronto. Except for a few really loud cheers, most of the audience greeted this statement with bewilderment. Take that for what you will. 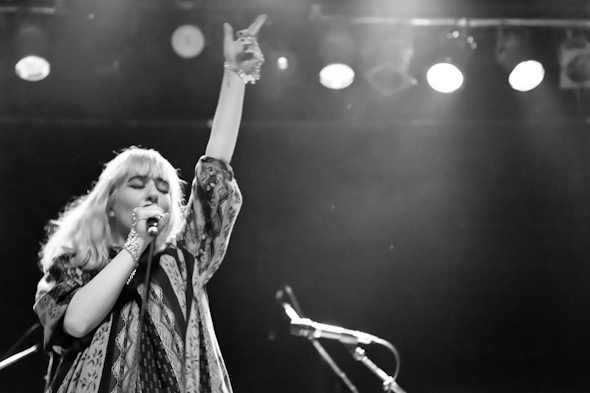 All was well, however, as soon as the group launched into their most popular song, "The Beat and the Pulse." Here, the lack of urgency that had characterized a couple of the earlier songs in their set was nowhere to be found. Instead, the song's muscular bass and synth proved to be just a bit too seductive, as even those who most vehemently disagreed with the Occupy movement started to grove.

Its easy to recognize the quality of songwriting on display in a song like this, but what I think was so effective during last night's performance was just how much the group has tightened up their material. In fact, throughout their performance, Austra showed how much a year of constant touring can help perfect a song. Most of the group's songs showed small flourishes; for instance, "The Beast" had a short saxophone solo halfway through the song that really added to the song.

I imagine that Austra still has their best material still in them, and if that turns out to be true, well, lets just say that even the spacious Phoenix won't be enough to hold them in the future.