The Barr Brothers bring their unique sound to the Drake

This morning I counted all the concerts I have ever seen and written about for blogTO. This review will be my thirty-second for the site. Each concert is, of course, different, but see enough shows and you tend to start seeing a familiar pattern. On Wednesday night I saw the Barr Brothers, and I can say I was genuinely surprised by their performance. The irony is that I should have expected this. I had, after all, interviewed Brad Barr, the band's guitarist and lead-vocalist, for a feature only last Saturday, and he had promised me that I would see some interesting things during his band's upcoming performance. I didn't believe him at the time, but he was right: the Barr Brothers concert at the Drake Underground was one of the most memorable concerts I've seen this year. 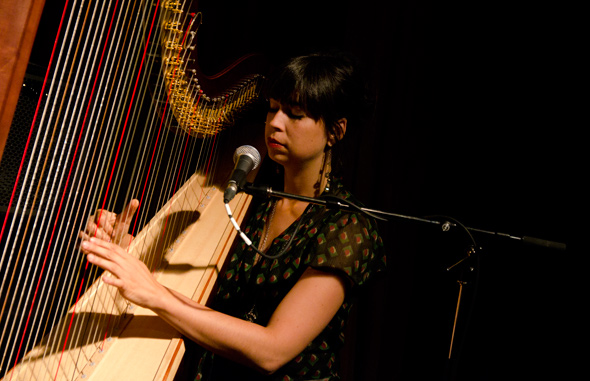 The band's set started promptly at 10:15pm. Throughout it, the Barr Brothers worked interesting and off-beat instruments and sounds into their songs. For instance, the intro to "Beggar in the Morning" saw Brad put what looked like a tape recorder close to the pickups of his guitar, convincing me for a brief moment that I was hearing a ghost. The band's experimentation never got excessive, however, as each weird sound or interlude contributed or lead to a diverse and well written set of songs. 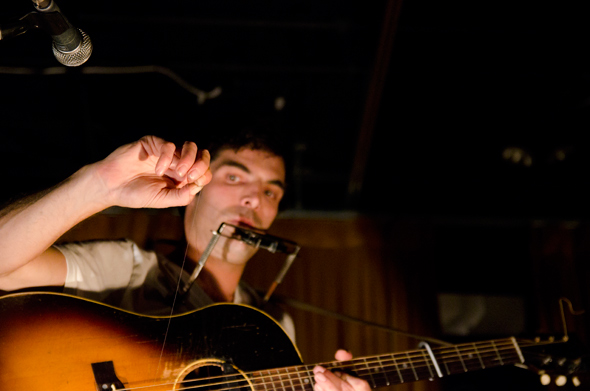 Later, Brad switched to a beautiful white Danelectro guitar that had several spools of polyester string taped to its body. Each spool had its length of string tied to one of the guitar's strings. The musician then handed out each spool to an audience member near the front of the stage and asked them to try and make the length of string vibrate. As he moved his left hand along the fretboard making different chord shapes, a cacophony of strange and alien sounds started to emanate from the guitar as the audience set to work trying to get their respective strings to vibrate (luckily, for reference there's a Youtube video of him showing off the technique).

I was one of the lucky few at the front that got to participate in this collective noise making, and being able to contribute to the creation of a piece of music was empowering. After the song was finished, Brad asked for a lighter from the audience and then light the strings on fire, leaving only the smell of burnt polyester as evidence of the whole affair. (It turns out that the brand of string that Brad depends on for this trick is only available in Toronto — from the description of the place he gave me after the show it sounded like he was referring to Romni Wools on Queen and Bathurst.) 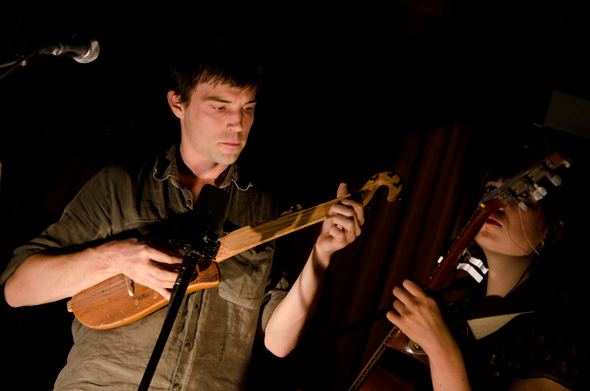 My favourite moment from the concert came during "If You Leave Me" when Brad and Sarah PagÃ©, the group's harp player, started an instrumental duel with one another. Brad would establish a pattern which Sarah would then repeat on her harp. PagÃ©, despite having the much more cumbersome instrument, was able to go toe-to-toe with her bandmate, even going so far as to recreate many of the harmonics Brad fashioned with his guitar. I don't have many harp players to compare her to, but at this point and throughout the rest of the night, PagÃ© was excellent. 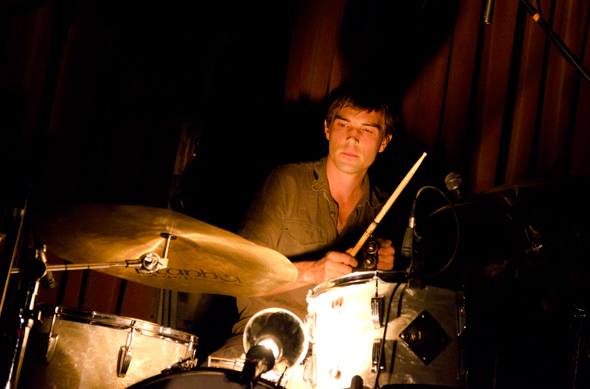 During my chat with Brad he told me that the band was "born out of a few close friendships," and based on what I saw Wednesday night, he was being sincere. It was plainly obvious that members of the Barr Brothers deeply enjoy playing with one another, a fact which is beautifully reflected in their music.