Michael Jackson goes to the circus

Michael Jackson The Immortal World Tour kicked off its Toronto shows Friday night at the Air Canada Centre. Being a old fan of Michael Jackson and Cirque du Soleil, I was anticipating some magical synergy.

The show's premise had promise, but in execution it lacked the soul that I've come to expect from Cirque productions, such as OVO or Allegria.

The production suffers by trying too hard to capture too much of Jackson's musical output instead of focusing on achieving a wow-factor in bringing the most important elements of his music and life to the big stage. 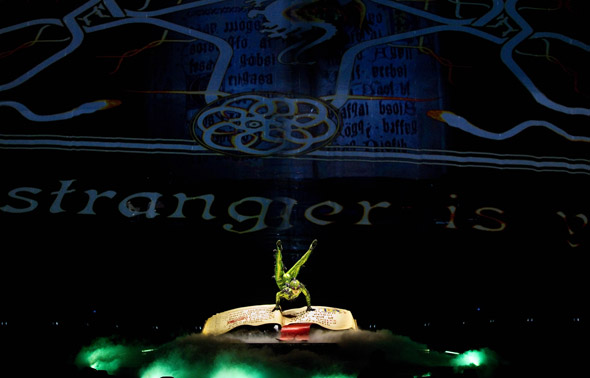 The show revolves around five clowns dressed as Michael Jackson fans and a guy in a white jumpsuit decorated head-to-toe in silver sparkling sequins. Let's call him Mirror Man.

The ACC is set up with a giant catwalk leading up to the centre of the stadium, with giant video screens towards the back. The show takes us through the giant gates of Neverland, as the voice of MJ booms through the speakers "Have you seen my childhood?"

There's too many disconnected scenes that don't quite showcase Cirque's potential. A gimmicky child-age Jackson floating in a hot air balloon above the stage as a song plays with the lyric "the painful youth I've had" didn't endear me much near the show's start.

Things finally get moving when an energetic live band joins in with "Wanna Be Starting Something" as colourful acrobats light up the stage. Then a guy dressed as Bubbles the chimp begins to dance with Mirror Man.

There's some other odd moments, such as when the cellist with the band — clad in knee-high glittering boots and bikini to match, hair down to her waist — does a solo.

The "Smooth Criminal" number is more apropos, with excerpts from one of Jackson's awesome videos flashing on the multiple screens while about a dozen "Michaels" in white shirts and black hats dance all over the stage in front. 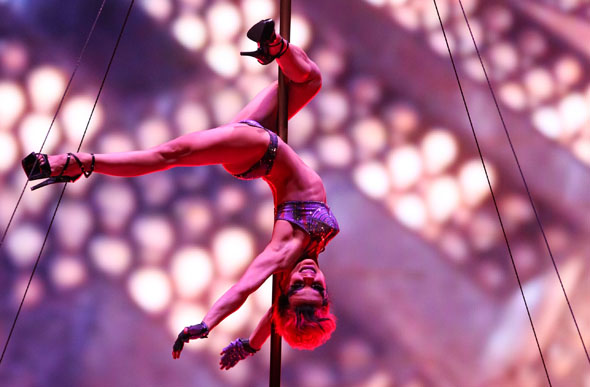 The most eye-catching number seems to have little to do with Jackson at all: a petite acrobat with fiery red hair and 10" stilettos scales a giant gold pole and has the entire audience awestruck with her sultry moves.

Other acts are tediously long, such as the Jackson 5 medley starring those five clowns/fans. And the audio clips of MJ talking about his inspiration for his songs slow down the pace.

But things pick up during the ghost stories segment, as a contortionist emerges from the pages of a giant storybook.

It's pretty cool-looking when half a dozen acrobats dressed as bats with two-metre-wide wingspans descend from way above the stage to the tune of Rockwell's "Somebody's Watching Me" — a song that MJ and his older brother Jermaine Jackson sung on. 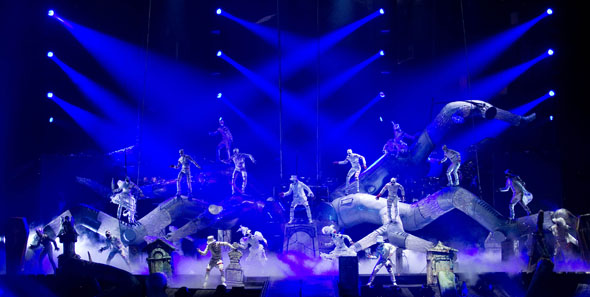 This led into Thriller, with video excerpts on the large screens, a graveyard and dry ice on stage with lots of dancing mummies. But the overly cranked-up bass and painfully loud kick drum was the scariest part.

After a 20-minute intermission, there's more acrobats on wires, while Jackson's song "I Just Can't Stop Loving You" plays in a hybrid English-Spanish version for some reason.

By this time I begin to wonder where the rest of MJ's hits went? Just then "Beat It" begins with a giant silver dancing glove on stage. The guitar solo part brings out the band guitarist along with the aforementioned sexy cellist for a dual at the end of the catwalk. And the too-short "Billy Jean" excerpt features an awesome amputee breakdancer with crutches.

Other elements seem out of place, such as a cyber army that looked right out of a Daft Punk video, but with lit up green $ signs on their chests, which later became peace signs and then red hearts.

Just when I've had enough, the curtain/big screen comes down, and a video of "I'll Be There" plays, after which the lights dim and a simulation encore with canned "Michael! Michael!" chants getting louder. 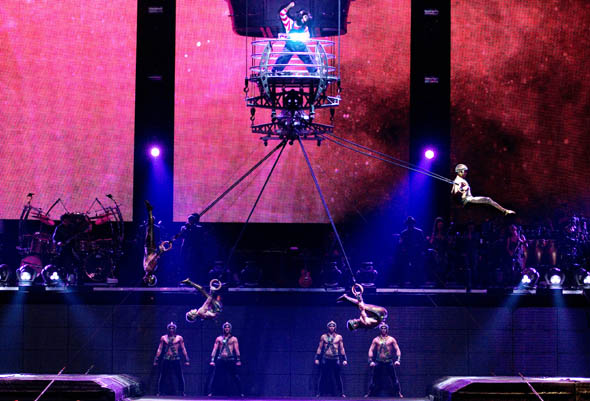 The screen goes back up and Bubbles is back in a cage above the stage as some Cirque acrobats swing around on dangling ropes to the tune of "Can You Feel It" disco number. Answer: "No, I'm just not feeling it." There's no emotional thread that helps string this almost two-and-a-half-hour show together.

Tickets for Saturday night and Sunday afternoon's shows are $65.25 - $190.25 are available through Ticketmaster.