The Balconies are siblings Jacquie (guitar/vocals) and Steve (bass/vocals) Neville, along with close-friend and drummer Liam Jaeger. The three-piece band originally formed in Ottawa and are now currently based in Toronto.

Their EP Kill Count shows the band is headed the right direction, sharpening and expanding their hard-hitting sound in preparation for their next LP, expected for release next year. But The Balconies also have a reputation for being a wild live act, leaving crowds sweat-drenched, with Jacquie Neville's explosive vocals and guitars tearing through the dance floor.

In our interview, two members of the band â Jacquie and Liam â talk about their love for Toronto, their recent EP and their upcoming show at the Horseshoe.

What's the best way to describe The Balconies?

Jacquie Neville: We strive to deliver a high-energy, in your face experience. We love creating music that is accessible but still interesting, that makes people smile, dance, and sing along!

What made you guys decide to move to Toronto? How would you differentiate between the music scenes of Toronto and Ottawa?

Liam Jaeger: I grew up in Toronto and met Jacquie and Steve while studying music at the University of Ottawa. For me it's very awesome to be home, and for the band it's great to be in a city that has a lot more going on. We still love Ottawa, but the musical community is just not as big as Toronto's. There's just more of everything here... more good venues, more good bands, more touring bands coming through the city, more fun places to hang out, etc. So we are definitely loving Toronto.

Do you guys have a favourite venue to play here in Toronto?

Neville: There are so many good ones! We've had the opportunity to play at some really amazing venues here in Toronto. The ones that stand out for us are Sneaky Dee's, the Horseshoe, Phoenix or Lee's. I know that's more than one venue but they're all special for different reasons.

Sneaky Dee's was the first Toronto venue we ever played at and we've made many friends there over the years. The Horseshoe is also a venue we love hanging out at. It's a comfortable and exciting environment, and it's always filled with interesting and dynamic people. We played at the Phoenix when we opened for Cold War Kids. It was so satisfying performing in front of such a large audience with so much power! We've played at Lee's Palace quite a few times now and we love the space and the staff. It's always a good time!

You've been on the Canadian music radar since your first self-released LP and now the Kill Count EP. How are you guys handling all the attention?

Neville: It's been quite the adventure over the past few years and we're extremely fortunate to have such a great following so far. It's nice to know people are so supportive and paying attention to us as we evolve. We look forward to what's to come!

People often mention how powerful and rowdy your shows get. How excited are you guys to play at the Horseshoe and what can you guarantee for those going?

Neville: We like it sweaty. We like to have fun. People are responsible for their own fun. But we promise to do everything in our power to blast your faces off, and hopefully you'll get sweaty too.

Kill Count seems heavier and more aggressive than your self-released LP. You're working with Jon Drew (Fucked Up, Tokyo Police Club) for your upcoming LP, and he's someone who knows a lot about creating and bringing big sounds. How has it been working with Jon?

Neville: Our new material has definitely gotten heavier. After the last three years of playing in this band I feel more comfortable in my own skin. I'm more confident with my guitar playing and that has affected my song-writing, the way I sing, how I perform and what direction I see the band going in. Jon Drew definitely helped play a role in that development and I'm grateful we've been able to spend so much time with him. He's been able to capture our live "rowdy" energy in our new recordings and we're really happy with the result.

I saw a video of you guys performing a Beatles cover. What's your favorite cover song to play live?

Neville: Haha! We don't often play covers. Last summer we learned a slew of Beatles tunes for a night we were hosting (Beatles vs. Stones) with Sandman Viper Command for a tour fundraiser. Sometimes, depending on the show, we throw in a cover tune here and there. "Heart of Glass" seems to be a crowd pleasing favourite. 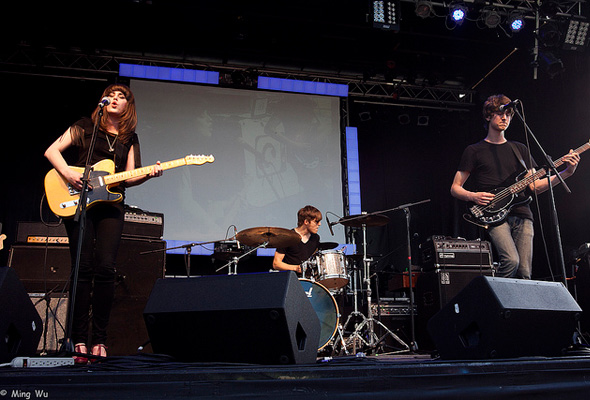 Finally, can you tell us any details about the new LP? Does it have a name or release date yet? What can fans expect from The Balconies in the new year?

Jaeger: The release date and title of the album will be announced in the near future. We've been in the studio for a few months now and we're extremely excited now that we're wrapping it up. We also just finished a video for "Kill Count" with Alon Isocianu from Reativ. In support of our new record, we're planning on being on the road for the better part of the new year.