Universal Music Canada (UMC), the label boasting such artists as Dragonette, City and Colour, and Kardinal Offishall, has embarked on a new approach to showcase local up and coming artists. The very first UMC Talent Scouts' Showcase kicked off Wednesday night in two separate venues along Queen Street: The Drake Underground and the Rivoli.

While the Rivoli's showcase centered around hip-hop, the atmosphere at the Drake was less genre restrictive with sounds of indie-rock, indie-pop, and electro all gracing the underground airwaves.

It should be mentioned that the focus of tonight's event is less on UMC signing artists to their label (something that they actively pursue), and more on creating awareness for both these artists and the City of Toronto overall as a hotbed for talent. As one A&R rep highlights, they want to see these bands excel, so much so that the label provides feedback to all performers on areas for improvement. These are not your typical industry suits, and they want artists to know that the A&R team is easily approachable.

How some of these artists are without a label is tough to fathom. Based upon their twenty-minute sets, here are my three picks for must-sign artists: 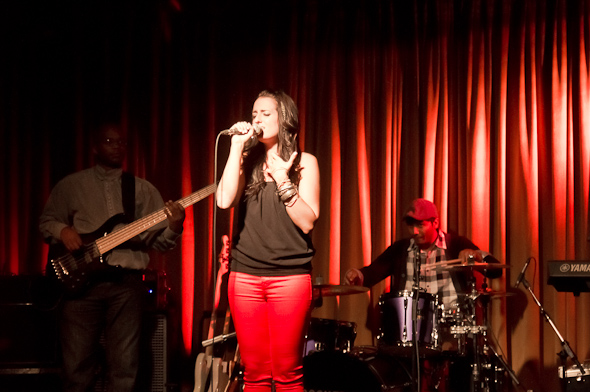 Brooke Nicholls
Be it the groovy ghost notes on the snare during "If Wishing Was Forever", the synthesized Leslie Doppler during a cover of Bruno Mars' "Grenade", or the background stories that lead singer Brooke precedes each song with, this four-piece band put together one of the most intriguing performances of the night. As the centerpiece, Brooke is not only fashionable with her red pants and black top, but vocally seductive as well. If you're looking to add a new artist to your library, or need an idea for a date, make sure to check out Brooke Nicholls live - she will not disappoint. 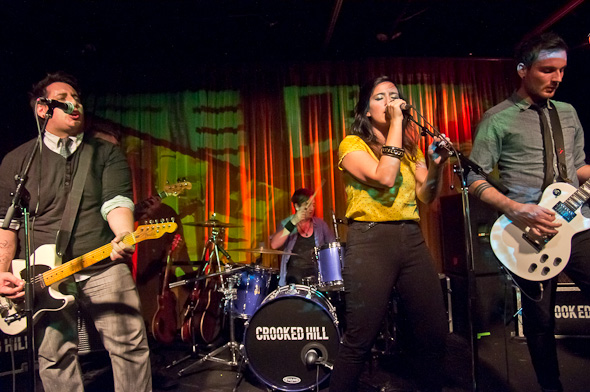 Crooked Hill
You know you're in for a strong performance when the crowd is cheering and chanting during sound-check. Hamilton is not only where this group originates from, but is also the inspiration for their name - Crooked Hill being a literal translation of the word. While normally consisting of a half-dozen members, tonight's crew unfortunately features just five. It's clearly evident that they have been playing together for a while, but most surprising is the recency of their first EP release Up, Up Away, just eight months ago.

Crooked Hill steers the night in a different direction with their distortion infused alt-rock set, consisting of lyrics from both male and female members. Music isn't their only talent however, as lead vocalist Rachel Shuttlesworth humours the crowd mid-way through the set: "Everybody doing alright out there? It's not passed anyone's bed time is it?"

Maps
After making the trek from their hometown of Barrie, Maps delivered an exceptional display of energy, chemistry, and talent. Patrick Hunter and Matt Reichenbacher, the two guitarists/vocalists, effortlessly trade-off the lead throughout the set. Whether they were nailing guitar solos worthy of Guitar Hero's expert mode, or reaching high notes reminiscent of the chorus in Our Lady Peace's In Repair, the two demonstrated both their instrumental and vocal talents. Maps' set concludes with "About A Girl", where Alex Reichenbacher and Connor Anderson respectively gift the crowd with a danceable rhythm interspersed with syncopated fills, and a walking bass line that is downright dirty.

Other performers on Wednesday night included: