Elliott BROOD kicked off the release of their third full-length album Days into Years last night by breaking in one of Sonic Boom's new locations, with its very first in-store performance. Saddled up in Toronto's landmark discount store, Honest Ed's, at 782 Bathurst, the new store is just a stones throw from its previous Annex home.

Taking in the scene, the grandiose chandeliers and mirrored walls still held the discount retailer's fun-house feel, but the place also looks a lot like the old record store. A well-equipped sound system pumped out tunes loud enough to fill the space but still not deafen the crowd. And the band stood on a humble three-foot stage draped with what could very well be your aunt Ida's living room rug. 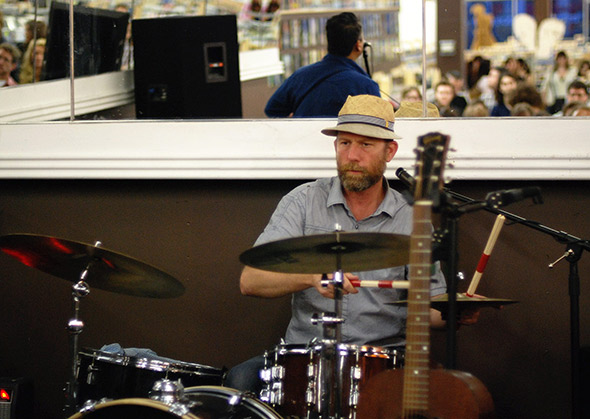 Spaced out between rows of vinyl, approximately 100 mid 20 to 30 somethings listened tentatively and engaged with stage banter on the best Doritos flavour. Hannah Georgas was even bobbing along discreetly in the back. Sonic Boom brought that feeling of community and the audience was respectful of that, dropping off their non-perishable food items and making donations to the Ft. York Food Bank in trade for free admission and screen printed Elliott BROOD posters.

With their uncanny ability to befriend an entire room, the band had an approachability that could be seen right down to Casey's shoeless performance. The locals were quite at home and it was refreshing to see an act with such little pretension. 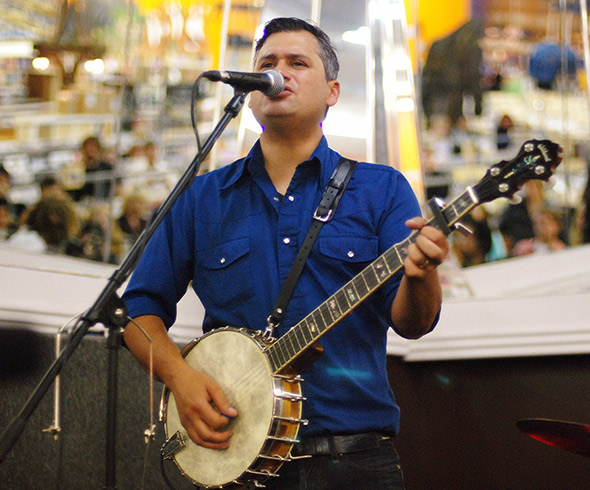 Admittedly for Days into Years the band took a step away from their previous death country approach and are moving into a more matured Rock n Roll vibe with electric guitar swamped in distortion. However, the same energy remained on stage if only toned down a wee bit with the impressive banjo and electric guitar showdowns in If I Get old. 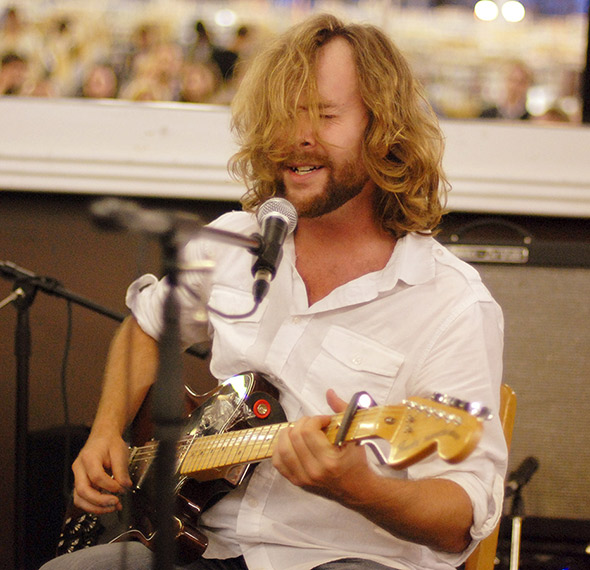 Their stand out song for me was Northern Air. It had a feel-good infectious melody that I could see doing the rounds at CBC Radio3. They wrapped up their set with crowd-pleaser Oh, Alberta and there was a spark of excitement flashing through older fans as they could finally sing along. A few die-hards even passed the flask.

After the show I caught up with the band to ask them why they chose Sonic Boom for their record release. Casey responded passionately with "They've always been good to us and it's great to be able to support them with their new store opening. Record stores are becoming rarer and rarer. Only the strong survive!" And with that ominous note Casey let out a jolly laugh.