The Hoa Hoa's (pronounced "wah wahs") are a local quartet whose name comes courtesy of a friend the band had worked with at a bar in Kensington; the word "Hoa" translates in Vietnamese to "flower". And their music reflects this symbol, as their psychedelic songs bloom with colour and the joyous buzz of guitar flourishes alongside a trance-inducing vocal haze.

Guitarist Femke Berkhout will soon depart for Holland to finish school, and that their newest self-titled EP may be their last release for a while. So, I caught up with guitarist/vocalist Richard Gibson, who was more than enthusiastic to talk about their new record, the band's future and their upcoming shows at the end of August.

What has been the most rewarding experience about The Hoa Hoa's project?

The most rewarding would be spending a great six years with really close friends, doing what we want to do and getting other friends involved in our Optical Sounds label, and having tons of fun parties at our place and all over the city. Getting a chance to make albums and play for some people in Texas and New York, Halifax, Montreal and of course, Toronto. We're really close friends, so it never felt like a job or anything, we just had fun and made music the way we wanted to do it. So I guess just sticking to our guns, that's been rewarding. We've had a lot of hilariously crazy times, could go on about that stuff forever if I could only remember clearly.

How was your NXNE show at Comfort Zone?

It was fine. The Vandelles from N.Y. played with us. And Heavy Cream. Dan Burke always helps us out around NXNE and CMW and we love him for that. He always has good line-ups at both The Silver Dollar and Comfort Zone during those festivals. We've done lots of shows with him the past few years, always a good time.

You recorded your last LP Pop/Drone/Pedals in the living room of your Kensington home, capturing a kind of romance and intimacy in that record. What was the experience like creating this new EP and what can fans and new listeners expect from it?

We also recorded this EP at our place, just a small living room really, and basically going for whatever vibe came out of us. The songs are quite different than P/D/P so I guess that's the only thing, but we basically had the same process. We did it over a couple months. The experience was: we'd hang out and play parts and come up with different ideas. Calvin (Brown) ended playing organ on half the songs 'cause he f------ rules, and he also played some electric guitar, drums, feedback and who the f--- knows what else. We were havin' fun like we always do, whomever has a good idea, lay it. We were in no rush.

What were some of the things going through your mind knowing this may be the last record you make for the next little while?

I don't think any of us thought about it being our last album we make, Fems (Femke Berkhout) going back to Holland for a little while for school, so it might not be too soon. But I think we'll make more music.

The term "psychedelic rock" is often used to describe The Hoa Hoa's sound. How important is psychedelic rock or rock n roll as an identity for you guys?

Genres are not important to us. Me personally, I love rock n roll. We all like all kinds of music though, good and bad in any style really. A lot of stuff should f--- off though. Right now, I'm listening to The Pastels, Pebbles Comps, Kraftwerk, girl pop groups from the 80s, Black Sabbath. Talking about genre names is a bit boring.

One of the standout tracks on your new EP is the thrilling "Blue Gumball", which builds and builds with layers of vocals and guitars. What inspired this song?

"Blue Gumball"... mostly early Stereolab and "Teen Age Riot" by Sonic Youth, I don't know. The lyrics are about a couple of teenagers out on a date I suppose going at it, and how they are so much stronger and brighter now, thanks to taking a risk in life. Cute eh?

The EP seems bittersweet in nature, a little quieter with the last two songs. How does the EP reflect how you all felt making the record?

We felt really good making the record, but we didn't make it to make us feel good, we did it for other people to enjoy. We like it because we did it by ourselves. It's honest to ourselves - no producers or even engineers or anything like that. Nobody told us what to do, no deadline, no expectations. I don't think we were going for a certain "reflection" or anything, just went at it, did our best. It's just some pop songs. 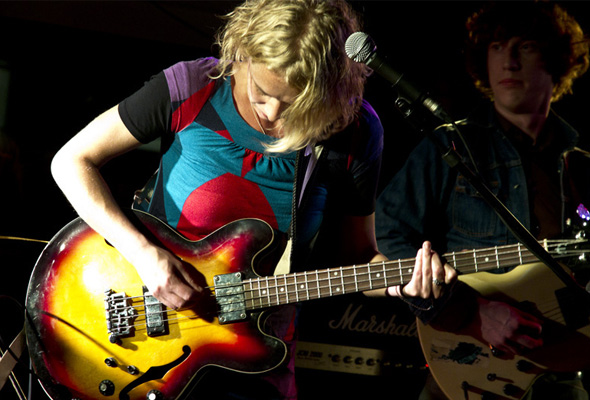 What can your fans expect at your shows at the end of August? And what will The Hoa Hoa's be doing during your extended break?

We are going to play Thursday and Friday night at The Boat in Kensington, gonna do our best to throw a big party. We're also gonna have a party at a friend's loft (TBA). We're going to have the following bands on the bill throughout the three nights: Action Makes, Planet Creature, Your 33 Black Angels (NYC), Ostrich Tuning, Chevalier Avant Garde (MTL), The Auras, Revolvers, Picturesound and different DJs spinning vinyl each night. General Chaos are doing the lighting, gonna be a ball, pretty much our fave bands around.

The Hoa Hoa's play back-to-back nights at The Boat (158 Augusta Ave) on August 25th and 26th. Check The Hoa Hoa's Facebook page for more info on their upcoming shows, including their secret show on August 27th.

Photos of The Hoa Hoa's by Aimee Power