Allie Hughes is like a musical butterfly: Fans can never be sure what to expect when seeing Hughes in concert because of her constant metamorphosis: from a pop-star prom queen, a rocking bride to an indie-pop diva. Performance comes naturally for Hughes, her themed and theatrical shows highlighting her strong stage presence. Hughes plays with a full band, giving her a strong backing overture for her tidal vocal presence, which sweeps her audience in and drowns them in sound and spectacle.

In our interview, Hughes spoke about her stagecraft, her upcoming debut LP and her free show to come at the Horseshoe Tavern.

You take the idea of music as an art form to a whole new level as a singer and performer. Can you describe the transformation of your performance style over the last couple of years?

Well I'll start by saying it's still very much in development and still transforming, but yes over the last couple of years some definite changes have been made in how I perform my music. I started as a girl behind a piano with an upright bassist and guitarist backing me up. After a while I got sick of being called "jazzy" haha, so I decided to start writing and performing with a more ambitious rock set up. The material started becoming a bit more over-the-top and so did the performance style to the point where this spring my set had morphed into a re-enactment of Carrie on stage. For something that might come across as "contrived" though, it's been a very natural progression for me. Well no one has said it's "contrived"... to my face at least.

And how did you reach the point at which you simply felt more comfortable with this new style?

I guess the first time I did it I knew it was right. For a while I felt like I was holding certain impulses back to fit in... it wasn't until I followed my impulses and really let loose that (ironically) I found my place.

To get people's attention, set a tone, and have fun in a way that makes sense to me.

To stay on that image of the veil and the act of revealing, how does the element of surprise tie into your live shows?

Umm, well I try and keep things exciting every time, so the audience never knows exactly what to expect. I like to have secret guests, props, and always keep it fun with how I dress and what jewels I adorn myself with.

What was the most rewarding thing about the production of your new LP and process of working with different producers?

Well through the process of making this LP I have discovered who I am as an artist, what I bring to the table as a writer, and what sounds and worlds I am drawn to. Who could ask for a more rewarding experience than that! It's been a longggg but necessary process for me and I am very proud of the work I have done and the place I am in now.

Describe the concept of the new LP in two sentences or less.

Far away yet so close. I never know. All I know is that I'll do this the hard way.

What sorts of things does the new record reveal about you? And what can fans expect? What can they not expect?

It reveals most sides of my voice. My insecurities. And my courage. It's not going to be an easy listening experience... not something to play at a dinner party, unless all your dinner party involved was cracking open nuts and various crustaceans. 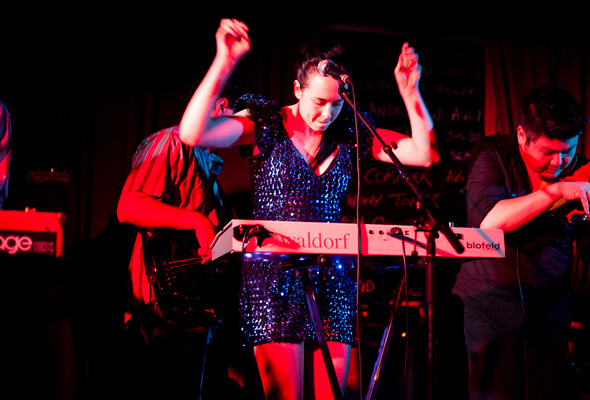 What can you promise about your show at Horseshoe Tavern on Tuesday (besides the concert being free)?

I'm overhauling my set! Playing the hits and yesterdays classics! And I'll definitely be dancing

Catch Allie Hughes, along with Nash, Rouge and Revelstoke for free at The Legendary Horseshoe Tavern on Tuesday, August 16th. Check the Allie Hughes website for more info on any upcoming shows and record releases.