A Bon Iver love-in at the Sound Academy

A sold-out Sound Academy is a far cry from an isolated cabin in northern Wisconsin, but it would have to suffice. And suffice it did. But that's more of a testament to Justin Vernon and Co. than to Toronto's finest venue (kidding, just kidding). But seriously, Bon Iver, those guys with that brilliantly sad first album recorded in near isolation, were here to impress on Monday night. 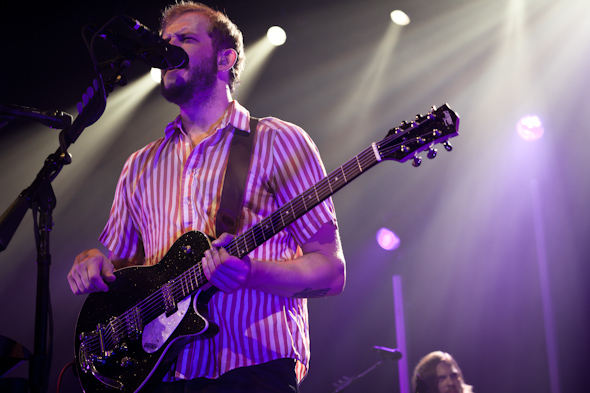 One of the summer's most anticipated shows, which sold out hastily and had scalpers and Craigslisters pushing tickets for $200 a pop, didn't disappoint. Having been a fan of Bon Iver for a couple years now, I went into this show trying to be skeptical. That was foolhardy. Although I though there was no way they would be able to transfer the fine intricacies and sound layering of For Emma, Forever Ago or hit the builds and varied arrangements in the more recent Bon Iver, Bon Iver, the set was miraculously sharp. The band was tight, well-practiced and the sound was record-quality. (According to a sign pasted to the front door of the venue, they were videotaping the performance, so it was a good thing they were pitch-perfect.) Vernon remains very much in control of his at-times soaring falsetto fused with a halting baritone. He commands it all effortlessly to boot. 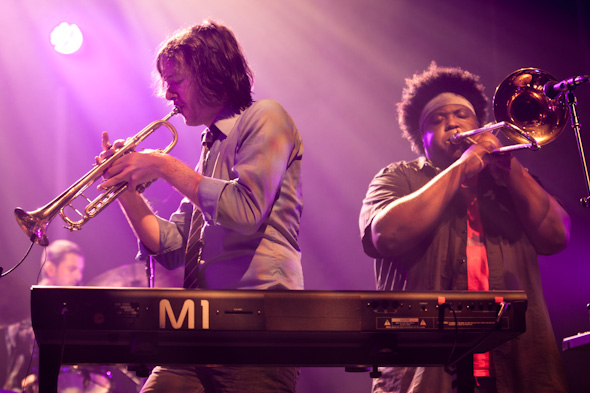 Launching into "Perth" as the opener, I was amused by the number of people around me going: "Jesus, that sounds good," "They are so good live," and drunken bros behind me at the bar high-fiving. It was an apt this-will-set-the-tone song that showcases quiet verses that grow into a huge apex, which gestured to much of what the night had in store. Even songs off of For Emma seemed to build and explode out of nowhere. With a nine-piece band that includes two drum sets, a range of horns, strings, synths and guitars, most of the songs included some kind of build. On "Creature Fear," this soft, stunning song, the band went into stadium mode and ripped into a you-didn't-see-that-coming conclusion. All I have in my notes is: "Creature Fear. Holy shit." 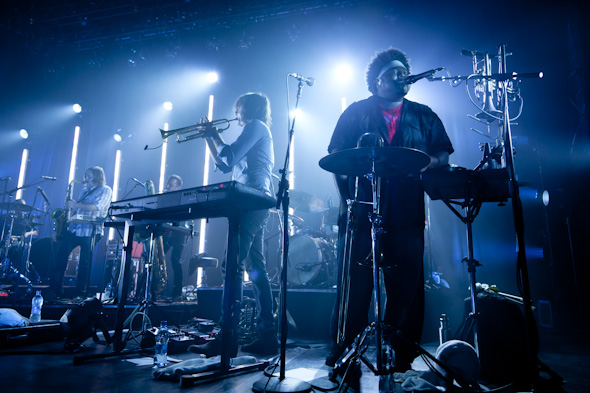 Looking for the intimacy that one would expect from a Bon Iver concert (aside from the monstrous environ we were herded into), came with a stripped down "Flume" and followed up with Vernon alone on stage for "Re: Stacks." Other than a couple bros a little too intoxicated for a Monday evening, yelling, "I love you Justin," a calm swept across the crowd. All attention was on Vernon and his guitar as he gently plucked away and crooned with that tragic falsetto. It was intoxicating. 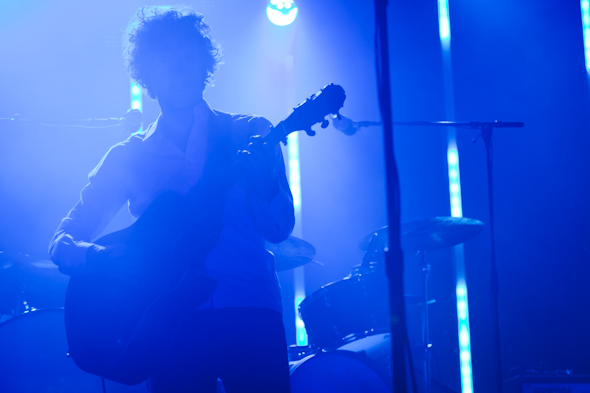 Vernon was cool with the crowd, too. Seeming a little shy at first, he would tend to thank the crowd continuously for listening and coming out. He also enjoyed some light banter: "This is sort about a town in Canada. Just kidding, this is "Calgary," and laughing to himself when he called "For Emma" a "titular song," referencing the title track and closer-before-the-encore for the night. 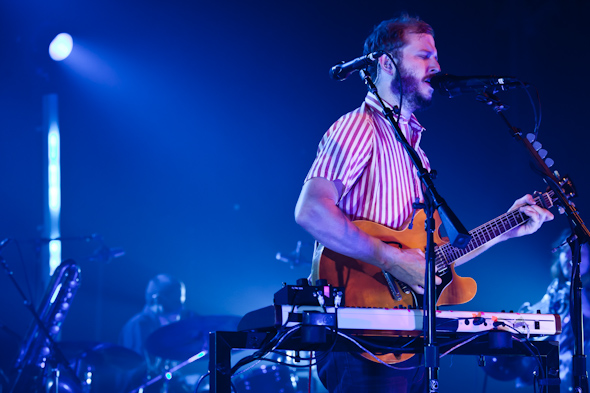 And then came the crowd's haymaker with the encore: "Skinny Love." It was a Bon Iver love-in for sure with the whole crowd offering up backing vocals. There was a sense of cognitive dissonance of sorts; you felt cozy, intimate even in such a non-intimate venue. The feeling held for the night's final flourish with "Wolves (Act I And II)" with hands and lighters in the air and the crowd singing the refrain: "What might have been lost." Thankfully, it wasn't lost at the Sound Academy. And like I said, that's a testament to the nine-piece giving it all onstage.