Tony Bennett loses a battle with the weather

If Saturday night's Soundgarden reunion concert were held inconveniently underneath a flight path to Pearson Airport, it's doubtful that anyone would have noticed. But during Diana Krall's opening set for Tony Bennett at the Rexall Centre at York University the same night, it was hard to ignore the low-flying jet as it made straight for its runway, neatly bisecting the open roof of the tennis arena and nearly drowning out Krall and her backing trio. 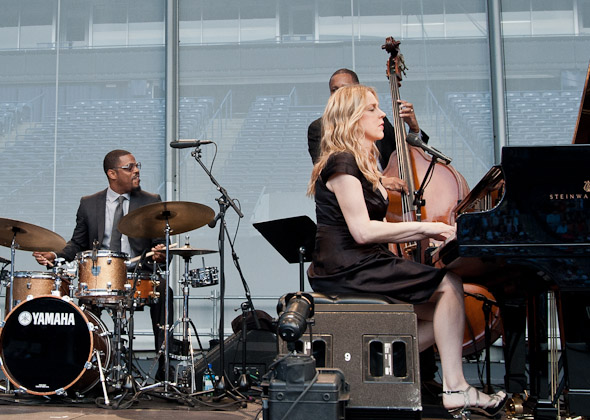 You could see the musicians anticipating the roar as it built in the distance, their eyes craning up from their instruments, but right on cue, during her version of Jimmy McHugh and Dorothy Fields' "Exactly Like You," Krall launched into snatches from "Let's Get Away From It All" ("let's take a boat to Bermuda/let's take a plane to St. Paul",) "Rocket Man" ("She packed my bags last night last night pre-flight") and - inevitably - "Fly Me To The Moon." The audience loved it, of course, which highlights the abiding appeal of jazz in an age when you'd think it would have long since withered away in the hot exhaust of pop culture. 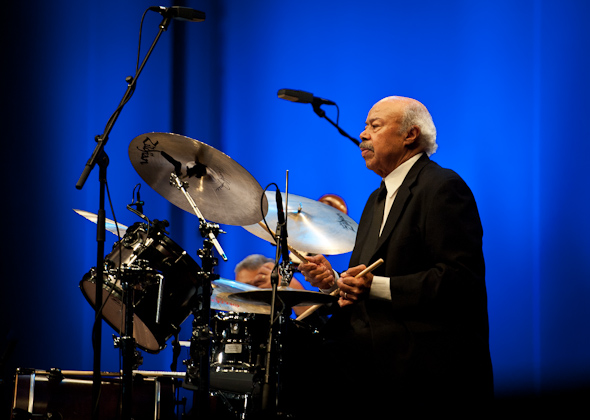 Jazz thinks on its feet, and can ignore the set list at will, which is why it appeals to an audience that's more than willing to meet it half way, and roll with something unanticipated in an evening's entertainment. Of course, it's one thing if that unexpected thing is a low-flying plane, or a performer's whim - as if inspired by her brief quote from "Rocket Man," Krall played the intro to "Benny And The Jets," and admitted that she could do a whole set of Elton John covers if so moved. (Thankfully she wasn't.) It's another thing, of course, when the evening's surprise comes in the form of something far harder to feed an improvisation. 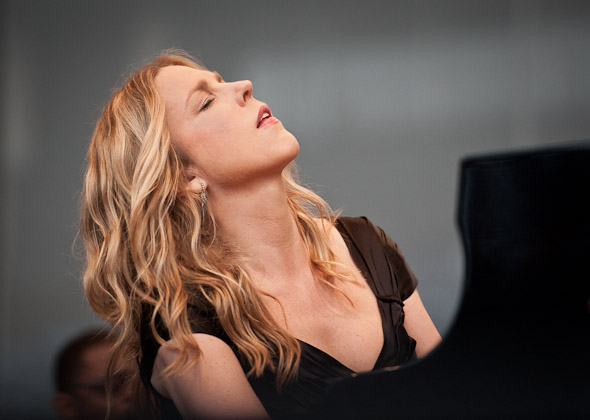 Krall is an attractive performer; her influences as a vocalist range from Peggy Lee to Dusty Springfield, and while her piano playing is hardly revolutionary, taken together with her singing, it creates a wholly appealing package, especially put together in a photogenic blonde with a personable stage manner. Her own enhanced celebrity status doesn't hurt; she dedicated "I've Grown Accustomed To His Face" to her husband, Elvis Costello, who himself garnered a round of applause simply by walking from his seat in the floor section to the backstage door after Krall finished her set. 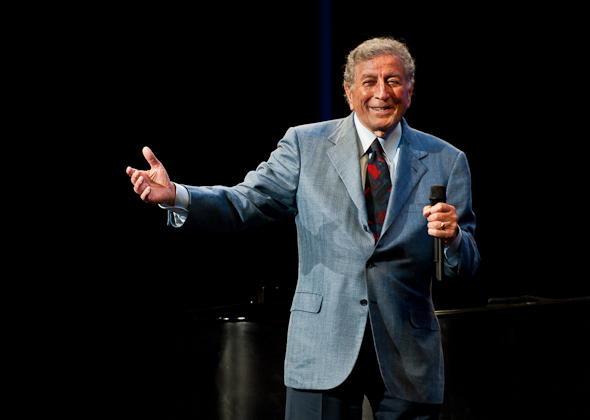 Tony Bennett hit the stage to a standing ovation - flattering, no doubt, but also simply a reward for a performer who's outlived so many of his contemporaries and remains, at nearly 85, still on the road and in the studio. While Krall peppered her set list of standards with tunes by Tom Waits ("Jockey Full Of Bourbon") and Joni Mitchell ("A Case Of You",) Bennett's portion of the evening was devoted to the classics of the American Songbook, with three songs made famous by Fred Astaire ("They All Laughed," "Steppin' Out With My Baby" and "The Way You Look Tonight".) 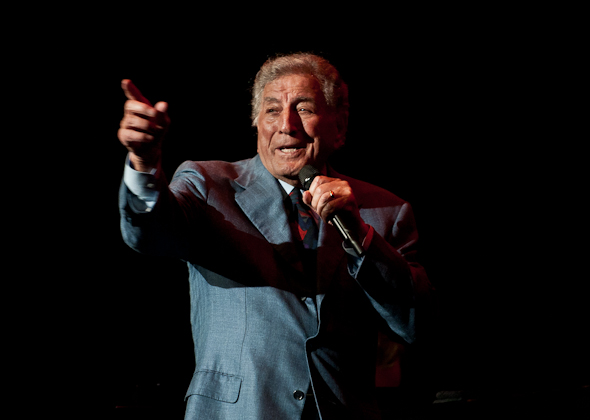 No one would pretend that Bennett is the singer he was even a decade ago, but that's not really a criticism. At this stage in his career, Frank Sinatra was doing a much poorer job of using his remaining resources, and most great singers, in any case, tell us more about what made them great when they've been reduced to the basics of tone and timing. Bennett's onetime showstopper, 1972's "Maybe This Time," is based around a building crescendo that was much more abrupt on Saturday night, the transition to the chorus shortened to spare Bennett the strain of the midrange, mid-volume section he no longer finds comfortable, but the whole thing was redeemed with a downbeat reprise that he's had in his act for at least a decade. 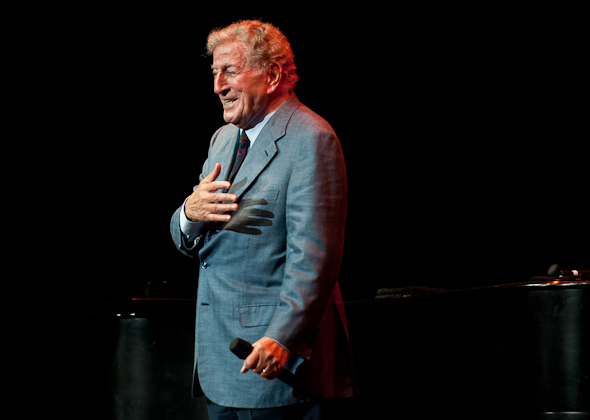 The audience was no doubt anticipating whatever he might do with his biggest hit, "I Left My Heart In San Francisco," not to mention a duet with Krall at the show's climax, but the weather wasn't so accommodating, and after eight songs the sky began filling with thunder and lightning. Bennett gave his regrets before leaving the stage for what everyone hoped would be a brief delay. It wasn't, and as the storm kept lighting up the sky, the promoters called it a night. It says a lot about the crowd - the sort of people you'd charitably describe as being in their mid to late golf years - that they were prepared, not only with umbrellas and rain ponchos, but even a few sets of heavy duty foul weather gear. Suitably attired, and with only a few half-hearted protests, they dispersed peacefully into the night.