Friday night night The Garrison welcomed a line up of quality of Canadian talent to promote the upcoming Pop Montreal festival. Opener Pat Jordache â a young crooner pedaling a streamlined take on groovy post punk â warmed things up nicely, reinforcing my opinion that his band is well worth keeping a watchful eye on.

I had turned up primarily to check out Grimes, aka Montreal-based musician Claire Boucher. The excitement surrounding her "Halfaxa" album had me intrigued to see how its electronic soundscapes would be recreated live. The set up was minimal; Boucher was accompanied onstage only by a keyboard, a sampler and layers of her own voice from an effects unit. 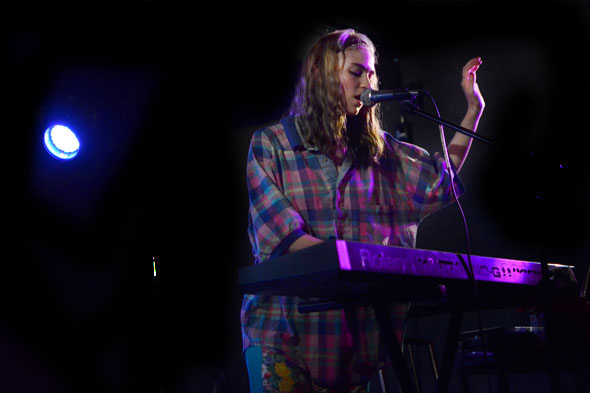 This simplicty meant that Grimes had a tough task winning over the unconverted. Throwing shapes sporadically in between button pushing responsibilities, Boucher ultimately succeeded in retaining much of the idiosyncratic character of her recordings. And with tracks like "Devon" sounding like an 80's teen pop idol drowning in ambient bliss, Grimes eventually had The Garrison in party mode after a slow start to the night.

Headliners Gobble Gobble were an unknown quantity to me, but it didn't take them long to make a big impression. While Grimes rearranged the synthetic sounds of the past in her own tasteful image, Gobble Gobble practically chewed them up and vomited them in our faces. 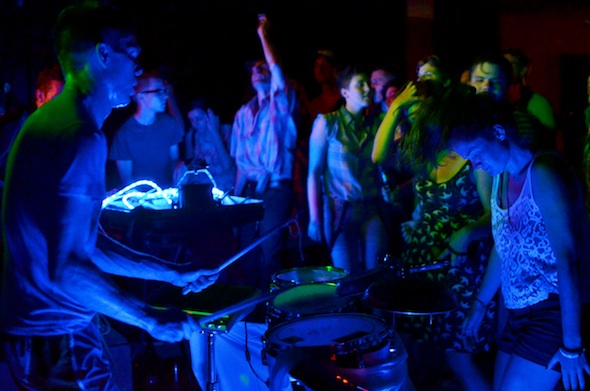 An unholy amalgam of auto-tuned chart pop, Euro-trance and Aphex Twin at his most truculent, Gobble Gobble spilled off the stage and into the crowd in glorious 3D Technicolor. Shovels and leaf blowers were waved around with little explanation, as the crowd were whipped up into a state of unselfconscious joy.

Those who stayed until the end of this dorky little indie-rave up were treated to a cover of "Where is My Mind?," and it was a privilege to witness a brief moment when pop culture collapsed in on itself and The Pixies met the Vengaboys, super-cool met uber-lame, and musical genius met aural atrocity. 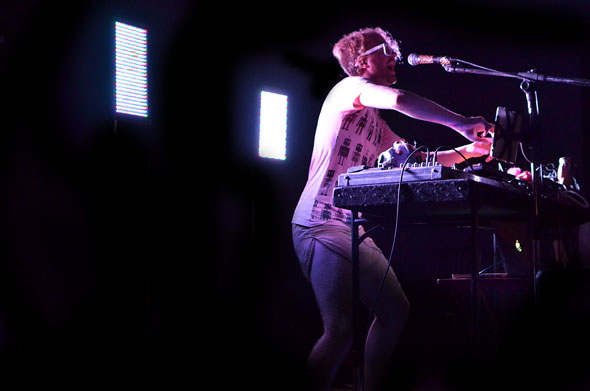