Led by singer/guitarist and founder Sonia Sturino, The Box Tiger are an indie-rock quartet whose songs roar and rumble on the stage. Their S/T EP may come from young and rumpled musicians, but the sound and instrumentation they produce are mature and steady. Ready to embark on a cross-Canada tour, Sturino shared some of her time to talk about the band and their sound.

Can you speak a little bit about The Box Tiger - the band's sound, the chemistry between everyone in the band?

The Box Tiger is myself Sonia Sturino, Glenn Tavas, Massimo Decaro, and Jordan Stowell. We are all from the outskirts of Toronto with the exception of Jordan who is our international member from Portland, Maine. We all really have a passion for making music and work really well together. Since we've started as a band there has always been something pushing, always a momentum and I think that has a lot to do with the relationships we have with each other and the relationship we have with the music and art we make.

Growing up in the shadows of a major city we've always felt like we had a point to prove. It's really pushed us and helped to developed a bigness in the sound. We are always looking for ways to make the sound as big as we can, and with only 4-5 people it can be a great task, so it's really the heart we put into it that I feel carries the sound above.

Your band profile suggests that The Box Tiger settles between Florence and the Machine (because of your vocals) and Broken Social Scene. What formative things - music, ideas - helped you become a musician?

I always find these questions the hardest, to be honest it all depends. You mention Broken Social Scene, which I think is a great place to start. Growing up in Toronto I did really look up to them. I always felt that BSS and things BSS-related were a big impact on the way I thought about making music or the image I had on how bands should be and function. I liked how everything felt connected. I like the idea of working together. I think honesty and team work is my main focus rather than being so competitive. I believe in being more communal. I'm not only a musician but a fan of music and art so it's really been working together with other musicians and artists that's helped me develop as a musician and a person.

Local artists/bands have seen good effects in terms of releasing their debut EP/LPs for free. What's been the reception like for your EP?

I feel like putting our EP up for free was an honest thing to do. This EP was really just our first real effort sonically and so it was more to get the band out to as many listeners as we could and sharing the music than making money. We didn't tour or have other big projects to fund for this release so giving it away for free seemed to be a natural thing to do.

And what about your upcoming record? What can listeners expect from your new LP and have you guys thought about whether you'll be releasing it for free?

We plan to be going over to Vancouver to record an LP in the fall actually. We are really excited about it, but having it be a much larger project it will be sold at a reasonable cost to help make up for the cost it will take to create it. We will keep the EP up for free for new listeners so our music is still accessible.

Will you be reworking any of the songs in the EP for this new record?

We have a lot of new material which I think takes on a little bit of a different sonic tone so the next recording will be focused mostly on capturing that as best as possible. Again it all depends once we actually get into the studio and working.

A lot of music produced today seems overly perfect or mechanized, whereas you guys seem to embrace spontaneity. Your tracks feel loose rather than boxed in (ironically). What philosophy do you follow when creating music?

I once read an interview where it was said that it's less about being impressive and more about being emotive. Ultimately music is art and art is fuelled by emotion. For us the songs are really about capturing that pocket of emotion. We are people. No one's perfect.

Bare acoustics really showcase your vocals in the haunting "Ending Song". Why end with this song?

The rest of the EP is really large and there are so many booming sounds coming at you. There is a lot of anger in those songs, a lot of struggle for me at least. I'm not a confrontational person. I don't get upset or upfront about the way I feel very often, where these first four songs on the EP were my chance to do that. It just seemed nice to end on a quit and almost vulnerable song in contrast. It felt right. 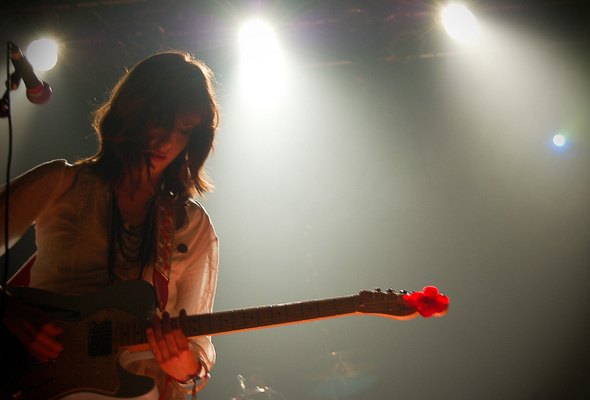 How excited are you guys about your tour and how long do fans have to wait until your next album?

We are super excited. We love Toronto but are excited to get out and get our music to the kids outside of the city. We're playing some shows in Ontario and Quebec this month and we should be cutting across Canada and North East USA come fall and we can't wait. We hope to have the full length out early next year. It's all really exciting!

Catch The Box Tiger with Casino and Parks and Rec at Supermarket (268 Augusta Ave.) on Friday, July 8th. You can download the band's S/T EP for free on The Box Tiger bandcamp page.