Toronto three-piece Rattail just finished recording their debut LP, which is set to come out on Unfamiliar Records later this year. And there really is something special about this band, whose members — Jesse Matthews on drums, Tim Fagan on guitar and Jasmyn Burke on vocals/guitar — add a little bit of everything to their music, from folk and grunge to electro. Their self-titled EP previews what Rattail is all about: a band unafraid of experimenting (using a hubbub of noise as part of melodies) or write oddball, yet catchy choruses. In our interview, Burke, the woman behind the band's memorable vocal twangs, familiarizes us with rattails, the band's sound, and their upcoming album.

I had a Rattail from 2008-2009, which is the year the band started. As an RIP homage I decided to name the band Rattail.

Your new S/T EP takes Rattail into new sonic territory, covering a little bit of everything from folk and grunge - and now you've added an electronic depth. How would you describe the band and its sound these days?

Well, that electronic stuff was kind of just for fun. We incorporate the stuff our drummer and bassist do with a sampler and laptop magic sometimes, but live we're kinda more lively... instruments and all.

You reworked "George Mounsey" from a Tropicalia/grunge-rock track to a slower, electronic version ("George Tronic") in the new EP. Why?

New life. New record. New tour. New brains. New boots. Wanted to switch it up. Try something our bones were not used to.

Are the new sounds you're experimenting with in this EP preparation for your new record? And what can fans and new listeners expect from your debut LP?

Some of the stuff on the tape will be incorporated into live shows. We did an all electronic show a couple weeks ago. I think we like to just try different things and expand our balloons so we can have more fun at live shows. The LP is not really like that EP, but it's maybe like a horse or something. Pretty excited.

What artists/bands influenced you growing up? And how do you think those influences affect your approach to music now?

I like a ton of stuff. I don't know if it affects the music, but there are ways of approaching music-making that I guess people try and emulate. I like everything from Bob Dylan to Prince, Pixies, Spice Girls, purple stuff. Sunny D. It all comes into play, even that sweet, sweet synthetic juice.

How was your NXNE show last month? What can people expect at your show at The Garrison next week?

I was pretty sick at the NXNE show, so I was kind of frustrated because I had a hard time singing. But we've been working on our album over the past month and might try out some new music on Tuesday, so it should be a new Rattail at the show. Old stuff. But you know, we have been on a couple tours and have changed the line-up of band members a bit, so I think we're tighter. Drinking but tight? 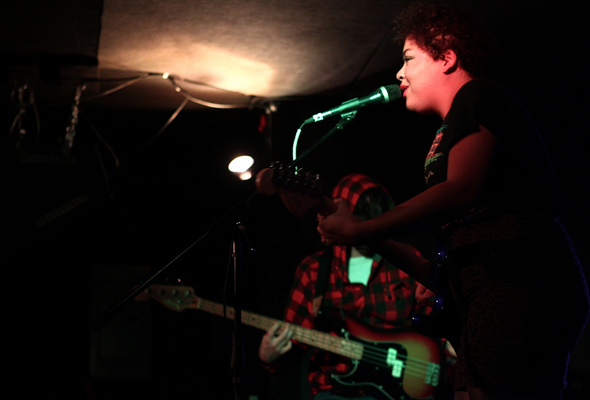 Can you tell us the name of your LP? And when can people expect your debut to come out in stores?

I think it's self-titled. Our drummer Jesse has been working on this weird cover that's pretty groovy. The Rattail cover art sat in the snow for the winter and got weathered. That's probably like us too. We'll be hoping to have the record to go out and play Halifax Pop Explosion, so it should be out on Unfamiliar Records by late October or so.

Photos of Rattail by p x (first) and Crustina (second)