Army Girls are Carmen Elle (lead vocals/guitarist) and Andy Smith (drums), a local indie-rock duo with explosive live performances. Elle and Smith are active members of the Toronto music scene, playing with an array of bands before forming a band of their own. Smith assaults the drums, barely able to keep his glasses on while Elle sings her lungs out and windmills her arms around her custom Yanuziello - a pair of fierce musicians who love their craft. Their first EP, Close to the Bone, comes out in September, and both Elle and Smith were kind enough to talk about the record.

You guys have worked with different bands prior to Army Girls (Carmen with Austra and Andy with Doldrums, Heartbeat Hotel). How did Army Girls come to be?

Carmen Elle: I first met Andy a number of years ago through his bandmate in Heartbeat Hotel, Chris Lyons. We all got together to cover a Feist song and I couldn't stop thinking about how much I liked Andy's drumming during that short rehearsal. I decided sometime last year to discard all my songs and start from scratch with a drummer and Andy was really my first and only choice. I called him once I booked a show I wanted a fuller sound for and it immediately clicked. Since then we've just been steadily accumulating songs and recordings.

I was lucky to watch you perform your opening set for Austra at Lee's Palace. The energy and sound you produced was so raw, tense, and taut. How would you guys describe the Army Girls sonically?

Elle: First off, thank you very much. We were really happy we got to open that show and had a really good time. With regards to our sound, the ideal sonic image we try to convey is best described as "garage motown." We took different aspects of each genre that we identify with and amalgamated them into a style we feel suits us that we can also grow into. To be more specific, the lo-fi, DIY aesthetic of garage rock has always appealed to us and is easy to do (but hard to do well!) so that provided the general attitude for the arrangements and recordings, especially with drums. With regards to the "motown" handle, we took into consideration the instruments in the band being very minimal and decided that it gave us a good opportunity to let the melodies of the songs be centrally prominent. Motown music exhibited some of the most amazing melodies of the last century, which gives us another thing to work towards - self-sufficient, catchy melodies.

What about the name of the band? Why "Army Girls"? And what was the experience like making your first EP?

Elle: Naming bands is never an easy task. Everything seems cheesy or gets shot down immediately and eventually if you think for long enough you just start grasping at straws and looking around wildly and adding "The" to kitchen appliances, "What if we were called "The Bunsen Burners?" I came up with the name "Army Girls" after seeing a girl walking along Bloor St. with an amazing vintage army jacket and this perfect flat top. I said it aloud absentmindedly and no one nixed it so we kept it.

Andy Smith: Naming this band, and actually, almost any band I've ever been in, was a long process. The longer we went without a band name, the more my mind filled with absolutely ridiculous and potentially embarrassing ideas. Luckily Carmen saw the Bloor St. hottie. I thought the imagery worked perfectly.

Elle: Recording our first EP was pretty great. It was exactly what we needed it to be. We asked Ben Cook from Fucked Up to produce it, having loved everything else he's done. We went to his studio in the east end of Toronto and recorded five songs in four hours flat and that was pretty much that. One of the hardest things about being a young or independent artist is having a vision you urgently want to convey but not having the means to do it as fast or as well as you want to. That's a big part of what was so crucial and great about working with Ben. He understood our excitement and helped us translate it into an EP exactly the way we wanted it - fast, dirty and kind of glorious.

The songs on your new EP have a lot of power while still being somehow delicate and soothing. What tone were you looking to produce with Close to the Bone?

Elle: With Close to the Bone we wanted to record the songs exactly as they are. We chose not to labour too much over arrangements or additional instruments. I think it's more common for new bands to take time when they get together to solidify a set before recording. With this record, we went into the studio immediately and the results were more organic. The songs were written with the same immediacy as the project has been treated in all other respects - I am a softer musician, I play guitar softly, I have a quiet singing voice. In order for these songs to work I had to play hard and yell into cheap microphones. We ended up achieving a rougher version of a soft collection of songs. I think we rubbed ourselves with sand paper and Close to the Bone is what ended up happening. I think it's really important to have these bare bones recordings to refer to as we continue to write and elaborate on what we've done here.

"Passionate" seems to be a good word for me to describe this EP. How else would you describe it?

Smith: "Powerful." At this early stage, our single, "The Power" is the one song that anyone needs to hear if they want to know what Army Girls is all about and where we're headed. But we also have a "playful" side, which will become more apparent within the image of the band more-so than the music.

Elle: I would describe the album as "raw." The songs came from a pretty rough place emotionally and the way we performed them on the album had the perfect amount of urgency to suit the songs. I think there's a sense of need in the tracks. We push and pull at each other a lot. 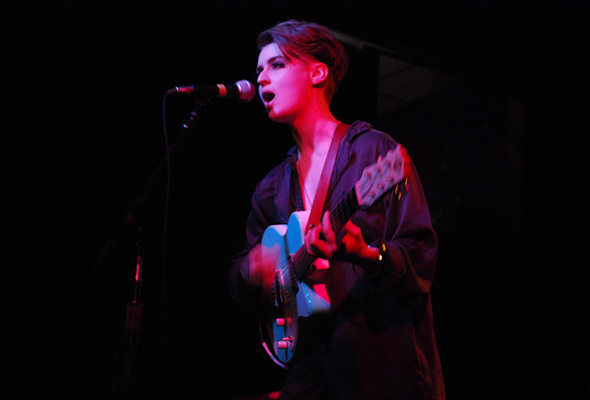 What can people expect at your show at Bovine Sex Club two weeks from now? And what's next for you guys?

Smith: We will be celebrating the release of our first full music video for an as of yet unreleased track called, "Here It Comes". The day we shot it will be a day we remember for a very long time. A huge thanks to Nev Todorovic. Aside from that, new songs and t-shirts are on the way. Hopefully for July 23rd at the Bovine Sex Club.

Elle: At the Bovine we may be trying out a new song. I particularly love watching bands play brand new songs because they put so much more effort into it and you can tell it's really special and important to them to play it right. And as Andy mentioned, our nsfw music video will be out within the week. We will be putting out a video along with a single every few months leading up to the album release. We have lots more stuff under our hats right now, but if you follow our Tumblr, you'll get to see what's coming up.

Catch Army Girls with Black Pistol Fire at Bovine Sex Club (542 Queen W) on Saturday, July 23rd. You can download their single "The Power" for free on their Bandcamp page.