White Denim play like a band possessed at the Garrison

One of rock and roll's oldest myths is that of Delta blues guitarist Robert Johnson rendezvous with the devil at a crossroads in Mississippi. In the myth, Johnson exchanges his soul for the ability to create the blues music for which he would later become venerated by guitarists such as Eric Clapton. Yes, it is a tired myth, but it remains conceptually useful. After all, not everyone has the combination of talent, determination, luck, and, most of all, the work ethic to become a successful musician â so for those of us not blessed with that combination of attributes it helps merely to reduce someone else's success down to an exchange between him or her and a man with a pointy tail and horns. On Tuesday night, the latest in a long line of trade-your-soul-for-musical-prowess bands took the stage at the Garrison. That band was Austin based White Denim. 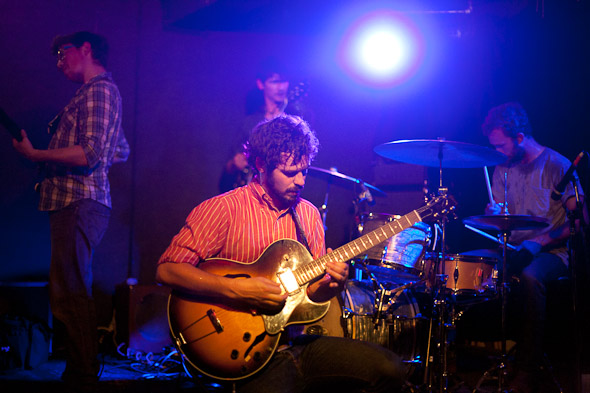 Actually, the band I saw on Tuesday night seemed, at least initially, to be completely possessed. There were several points at the start of their set where I thought that they weren't going to stop to take a break in between songs; this is truly a group that recalls the glory days of jam-based bands such as Cream, or, more recently, Toronto's own Quest For Fire. 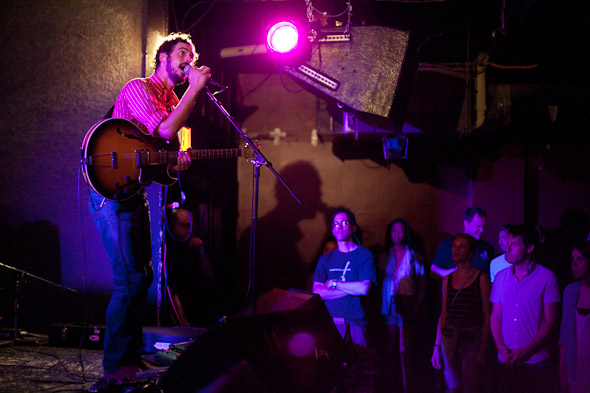 Of course, they did stop, and at one point lead-singer James Petralli even asked the bar for some water for the whole band, "I don't mean to be rude, but could we have some cups of water up here?" Proof, it seems, that the band was human. After their initial assault, and once they got a bit tired, White Denim actually started to play even better. It was a good thing, too, because after their initial adrenaline infused outburst they played some of their most well know songs such as "I Start To Run" and "Shake Shake Shake." 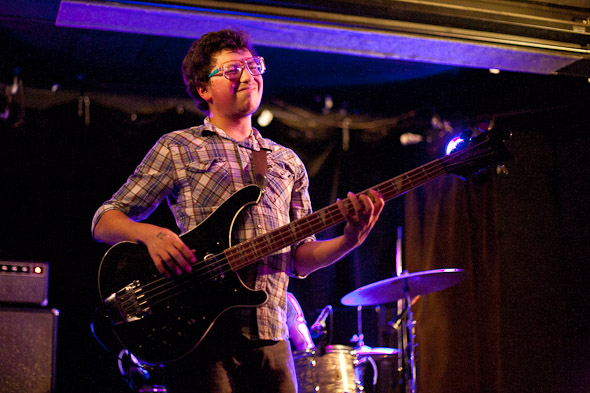 And it was at this point, when the band had started to mellow out, that each member of White Denim started to shine as musicians. James Putralli and Austin Jenkins, the band's two guitarists, were perfect foils to one another. Especially impressive was the band's bassist, Steve Terebecki, who got some very well deserved pats on the back at the end of the group's set. It should also be mentioned that while the band's sound definitely recalls the sound of a bygone musical era, it still sounds fresh and pressing. 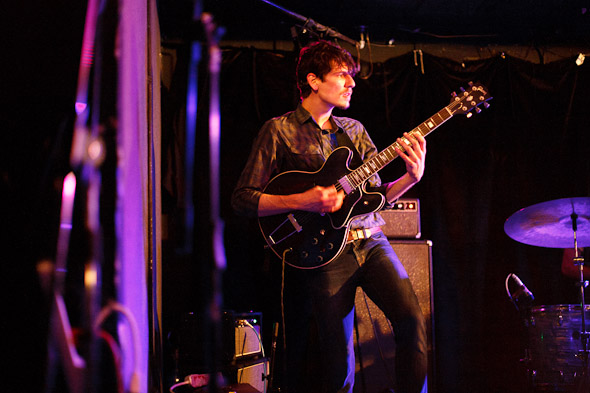 And it's White Denim's hot and sticky sound that turned out to be the perfect antidote to an unseasonal cool summer night. As far as their talent goes, while I still want to believe a dark stranger at a crossroads in Texas gave it to them, I'll just have to settle for the less mysterious explanation that they've worked hard to get that good. Good job, boys.