The Two Koreas describe their music as "glacial garage" or "garage-rock encased in ice, perfectly preserved in its most primal state." And their newest album, Science Island is full of icy and persistent tracks unconcerned with any need to pause (aside from a 45-second instrumental).

The glacial aspect of Science Island conceals something big beneath the surface, something to break through and get to, almost like a jawbreaker. It's an album you want to listen to for a long time, something you imagine your kids or future-kids listening to someday. In our interview, guitarist Kieran Grant talks glacial garage and the spirit of Science Island.

Who in the group coined the term "glacial garage"? How would you describe it in musical terms?

That is a (Stuart) Berman original, that one. It honestly wasn't an attempt at marketing, but just something Stuart came up with that sounded remotely cute, as he is wont to do.

It does, however, make a fair bit of sense. The basic idea was that our sound had always been somewhat garage rock-derived -- even when we didn't sound like a garage band in the way that, say, the Black Lips did, there was something in the spirit of it that went quite logically from post-punk and new wave on back through to the obvious pre-punk -- hardly an uncommon equation these days.

Yet, as guys who also listened to hardcore and things, we realized that our sound was pre-punk and post-punk but largely left out the punk in the middle. It was a bit of an in-joke, I guess, like most of what we did. But it was still pretty instinctive and natural for us.

And so it also was when we started to fan out with more noise, more layers, and slower-moving songs. Stu took the notion of an acquired iciness on top of the "garage" and ran with it. I mean, the guy makes his living coming up with colourful wordplay to describe music. Talking about our sound is a bit of a busman's holiday for him.

What were your first impressions of the album after recording it? In naming the record Science Island, what sort of sounds were you guys experimenting with in this album?

The writing of the album was so drawn out -- I've openly used the term "belabored" -- that I'm not sure we knew quite what to make of it at any stage. If we were experimenting, it was on a song-by-song basis. Speaking personally, I was unsure if songs written so gradually over a few years, sporadically, yet with such a monolithic feeling compared to our older stuff, would take an interesting shape on record. I was relieved when I heard what the producer, our friend Jon Drew, was able to assemble from the tracks we put down. The sheer bigness of the sound gave the album a new dimension. I wasn't exactly over-the-moon about certain songs to begin with. This production gave some of them room to grow on me.

As for the name, it was a pretend place name my two children came up one day -- entirely unrelated to the band. But we found it suitable when applied to the bigger drones and slightly more synthesizer-driven noise we'd been messing with. And I think we liked the visual nature of it, too, the note of isolation and the hint of futurism. The songs predated the Science Island title, mostly, but it summed up a lot of what had been going on, and not just in terms of the sound.

Let's just say hypothetically that you were not The Two Koreas, but critics writing about the band: How would you describe Science Island? Coming from a music journalism background, are you more critical of your own music, and have you developed thicker skin when it comes to others' criticism?

I think this background some of us have as critics -- and I should say that virtually all five of us are writers in some capacity in our working lives -- gives us license to come up with fey, slightly pretentious assignations for our music, such as "glacial garage," and seem like we're half-joking when we do it. We're almost always half-joking -- especially when doing something that could be construed as pompous-sounding, such as what I'm saying right now.

If I were actually writing about Science Island, I hope I'd be less of a smart-ass. I also hope that I'd be able to put it in the context of our other albums and have time for it to grow a bit.

There is a special element in your songs--of tension rising into something lethal. How would you describe the energy of The Two Koreas? How was your CD release show at Parts & Labour?

The energy could be described as "controlled catharsis, schedules permitting."

The show was a blast -- as much fun as we could manage given a 1AM start time. We're just old enough that we normally do our best work right when we'd otherwise be going to bed, which is anywhere between 10:15 and 11:30PM. But played past last call with a lengthy encore, which I don't think we've ever done before... We must've played about 80 minutes -- double our usual set. A rare treat for us, if for no one else there. 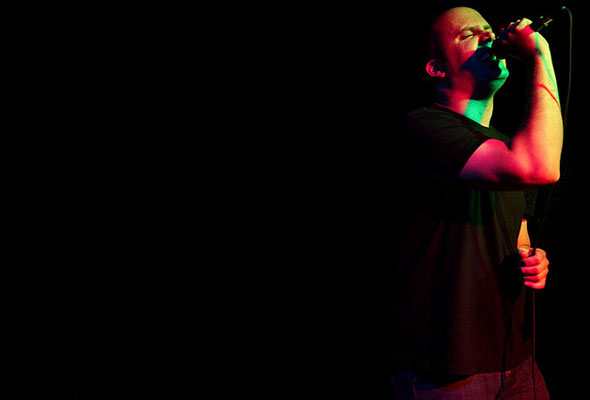 You end the album with two epic, definitely show-stopping tracks. I love the way "Karl Johans Gate" - a song named after the main street of Oslo - gains momentum. What are some of your favourite songs to play live?

We tend to pick fairly evenly from the previous two albums -- still enjoy trotting out really early songs like "Retarded Architect," I guess to fulfill our garage needs. Another Norway-inspired song, "Boy Teen Oslo," remains another early favourite. "Karl Johans Gate" is probably my favourite of the past three years. Interestingly enough, one show-stopper we won't be doing live is the new album's closer, "Majored in Swimming," which we've since shortened and sped up with a radical rewrite. We just like it better that way. We've been opening sets with it lately.

Do you feel like you captured the spirit of The Two Koreas in this album? Does it still sound like music coming from a bunch of "cranky" guys?

I'm not sure! I think that the spirit of the band's early phase and origins were best captured by Altruists when we made it in 2006. Science Island is certainly a time capsule for the following three-to-four-year phase, but maybe a bit more open-ended in terms of its representation of the band. Perhaps our group spirit is a bit less uniform than it used to be. One thing I can say is: it confirmed to us that everything we do will always honestly document where the band is at that moment, no matter how much distraction and uncertainty surrounds it. It's been very reassuring. We also lowered the bar by finishing about three songs a year for three years. We've already decided that the next one will be knocked into a hat in a few months -- which, of course, means a year.

What can people expect from your NXNE show?

Politely assertive competence, and you can probably dance to it.

Catch The Two Koreas' NXNE Showcase at the Velvet Underground (510 Queen St. West) on Thursday, June 16th. You can purchase Science Island, along with their other records on The Two Koreas bandcamp page. And below, grab a free download of their track "Midnight Brown" courtesy, KEXP.