NXNE 2011 Preview: The Most Serene Republic

The Most Serene Republic's new album Pre Serene: Thee Oneironauts, as the name suggests, is a collection of songs created prior to the band's official existence. Sounding like a fully orchestrated electronic invasion, TMSR's new LP forms bedroom dreamscapes that are dramatic and surprisingly emotional upon a careful listen. With their NXNE showcase only a week away, guitarist Nick Greaves talks about TMSR's teen years, his childhood obsessions and the inspirations behind their LP.

What inspired you guys to create the LP Pre Serene: Thee Oneironauts? Could you talk about your earliest connection to music?

Well, we actually recorded this last record back when we were only 18 years old. We originally started working on Thee Oneironauts just as a fun project for us to create music. There were never any expectations to take it anywhere. We finally decided to release it for our fans to give them a bit of a taste of what we were doing back when we were still teens. My earliest connection with music has to have been when I was just four years old. I was completely obsessed with The Phantom of the Opera, I mean like use to dress up as the Phantom and pretend to play my Fisher-Price piano to the Phantom soundtrack. I was a very odd child. The first artist I can remember loving as a kid was Cat Stevens.

Your records are always emotionally-charged, always seeming to stay true to what you guys are feeling at that time. Do you guys make a pact to always tell the truth in your song-writing?

I don't think that it is something that we are necessarily consciously aware of while we are working on a record. We all just seem to feed off the same energy, and that in turn becomes a theme within our records. For instance on our album, Population, we were going through our "reading Ayn Rand, questioning the world" phase. As far as telling the "truth," that's just how we express ourselves. We always have to tell the truth. It's just what we do. No bullshit here in TMSR.

How would you describe your new record as a form of a story? What sort of emotions and ideas hide under the iceberg?

If it was a story, it would be the story of a bunch of eighteen year old kids who were brought up in the suburbs of Milton, ON, and they really had no fucking clue what the "real world" was all about. I think we would all play the character of John Travolta in Bubble Boy.

In the first track, you sing the lyrics, "hold out your hand and close your eyes because you're in for a big surprise," which makes me think about the instability of things - like solid ground that crumbles under your feet. What does this song mean?

I really can't speak for Adrian (Jewett) on this one. But if I can try to decipher what I think he might have been saying at the time (please remember, this is our eighteen year old selves going back in time), I think it might be the following. I personally feel like it's his way of talking about jumping into the "real world", as this was right after we finished high school and were all about to go our separate ways off to various art schools.

It takes a special kind of band to be able to sing about the "Zoltar Speaks" scene from Big. What's your connection to this film? And what other things inspired the creation of this record?

Adrian's favourite actor (till he made The Da Vinci Code) was Tom Hanks. He had Tom Hanks posters all over his dorm room, had all his movies. I'm pretty sure this is Adrian's favourite film by Mr. Hanks, aside from The Green Mile. As far as other things that inspired this record: Super Mario, Childhood Crushes in France, and just being a bunch of hyperactive kids living in the 'burbs and looking for a way to express ourselves musically and creatively. 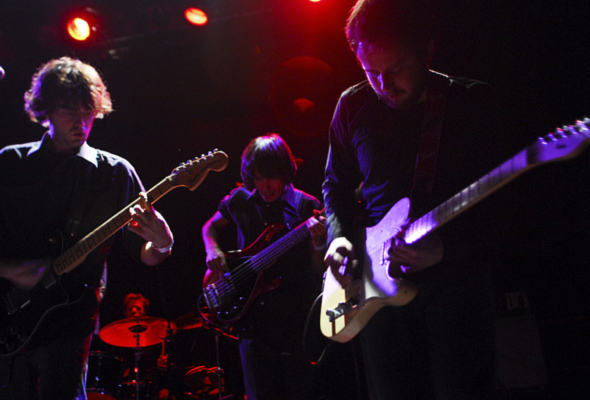 How excited are you guys about NXNE? How can you describe TMSR in a live setting?

We're very, very excited about NXNE! We love playing the festival. It's a festival, and not nearly as drunk or stressful as its American counterpart SXSW. As for our live setting, I would call it a beautiful clusterfuck of sound that doesn't like to play in 4/4 time.

You can purchase Pre Serene: Thee Oneironauts on the Arts & Crafts store.

Photos of The Most Serene Republic by Ryan Muir