The Elwins are a fun indie-pop quartet, whose songs spring from simple and moderately-paced melodies. Full of warmth and subtle tempos, their EP brims with inviting energy through Matthew Sweeney's clear vocal charms and the nonchalant rhythms provided by Feurd (bass), Travis Stokl (drums) and Nathan Vanderwielen (guitar). Ready to release their debut LP this summer and rock at this year's NXNE, The Elwins took some time to chat about their new record.

What are a few things listeners need to know about The Elwins to better understand them?

Matthew: We are a fun loving bunch of berries! We like to sew our own clothes back together and pet cats. Here's something from everybody to get a better idea individually.

Matthew: To get a better understanding of where our musical temperament comes from throw on some Joe Meek (check out the track "Dumb Head"), Gary Lewis and The Playboys, Of Montreal and Hermeto Pascoal's "MĂşsica da Lagoa" (video).

It's been two years since the band's last release. What sort of things - vocal/instrumental arrangements, vision - have changed since then?

Matthew: So much! We recorded the EP as a two piece, just Travis and myself. We were trying to capture the essence of what we were doing live at the time, just drums, bass, guitar and one vocal. Our live show was essentially all the same parts from the recording. Since then we have done a lot of experimenting, demoing out our songs and taking more time layering parts and tweaking arrangements. We take a lot of influence from older pop songwriters such as Burt Bacharach who have a lot of variance in the instrumentation and cool vocal harmonies. I think that is more apparent in the new recordings. We almost went in the complete opposite direction and decided to utilize the studio as much as we could. So we got in other musicians to play horns and woodwinds and ukuleles and lap steels and recorders and strings and everything! We also have four members now, to better replicate the sound of the record for our live show.

How about the band's approach of creating songs out of simple melodies? What do you feel is the biggest advantage of this less-is-more approach?

Feurd: There are a lot of different ways that songs come about. Sometimes it starts with a simple melody, sometimes with a chord progression or a simple groove. Lately when we're writing we try to focus on putting everything together at once. All the core elements come together at the same time, with the melody inspiring the chords and vice versa, rather than focusing on completing a melody and then trying to figure out the chords that work beneath it. I think the best thing about writing that way is that the song has a really great flow, each part complementing the others.

Your debut LP is due out this summer. What was the recording process like? And have you guys come up with a title for the record?

Travis: The recording process was amazing for us. We came up with a plan of what we thought would make the best album and went for it! It was nice to get away from our comfort zones at home and travel to work with some amazing people. It really allowed us to focus on the music. The first thing we did was go to Philadelphia and do pre-production with Bill Moriarty (Dr. Dog, Man Man) for a few weeks. We went there with fourteen songs, about half of which we had never played as a band before! We spent a lot of time there jamming the songs in Dr. Dog and Bill's shared studio. He helped us tighten everything up between the drums and bass and lock in the groove of each song. He also had a lot to do with expanding some of the demos that were less than a minute long into full songs. He has a really amazing musical sensibility! Then we headed to Seattle to work with Ryan Hadlock at his studio, Bear Creek. The studio is located outside the city and was converted from a horse barn, it is an awesome place! We stayed there for a month and had a lot of time to play with sounds and fool around on neat guitars and keyboards, like kids in a candy store! And yes, we have come up with a name for the record: And I Thank You!

Did recording this album in Seattle and working with talented producers offer a fresh perspective for the band?

Feurd: It's always important to get a fresh perspective on things, especially when you've heard the songs over and over. It's so exciting when someone suggests an idea that's really different from what anyone in the band would. You try it out and hear the song in a completely different way. They brought so many things to the table and really allowed us to step back from the songs and see them in a new light. We learned so much from them, and are super grateful for all their hard work and patience! 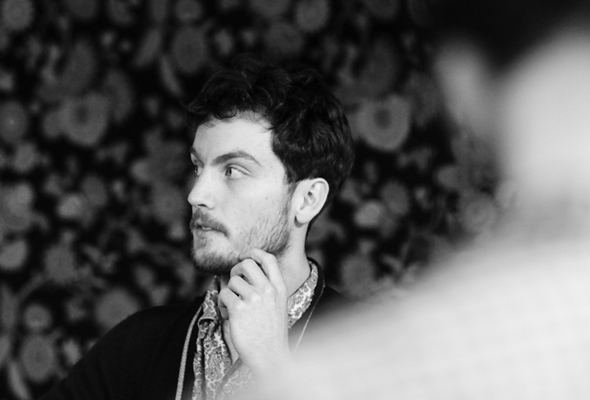 What can fans and new listeners expect from The Elwins showcase at NXNE?

Feurd: A fun-filled, high energy show! We like to jump around and get everyone up on their feet. If you come expect to turn all frowns upside down! Also for those who haven't seen us live with our fourth member, Nathan Vanderwielen, the sound has changed a lot! We are having fun with keyboards and lots of new parts to play around with. He has been playing with us for the last five months and is super rad. You will also be able to ogle all of our handmade merchandise including hats, shirts, iPod cases, bags, pins, bracelets and sometimes undies!

Catch The Elwins' NXNE show at Bread and Circus (299 Augusta Ave.) on Saturday, June 18th. You can download their EP for free here. And below, grab a free download of one of their tracks.