Hands & Teeth are a five-piece experimental pop band from Parkdale, and each member seems unafraid to add their own artful touch to their musical arrangements and song-composition. Their EP, Enjoy Your Lifestyle (which remains free for download), fizzes in bubbly pop and springs up through vocal interchanges and inventive harmonies. As the title of their EP suggests, Hands & Teeth steer listeners through knee-slapping good tunes toward the joy in the everyday. And in our interview, keyboardist and guitarist Jeff Pinto talks about the making of EYL, performing and their new record.

What sort of things did you guys learn from the experience of making the Enjoy Your Lifestyle EP?

We learned that songs composed in the studio cannot always be reproduced live. One of the songs that garnered most attention on EYL, "Until the Night", was constructed as we recorded. Lisa Lobsinger (Reverie Sound Revue, Broken Social Scene) and our own Natasha Pasternak collaborated vocally on that track even though they weren't even in the same country, let alone the same room. There are textures and layers on that song that we never could quite nail down live.

One of the biggest differences between EYL and our upcoming album is that most of the material on the new album we've been playing live for some time. It'll be interesting to see if that lends the new one a different energy.

We also learned that taking control of the recording process (by tracking everything but the drums ourselves) gives us the freedom to capture really great performances. In some cases we've re-tracked things on three or four separate days because after having sat with something for a while we realized we could do it better. We've had to put a lot of time into it, but we've captured the performances we want to share.

What didn't we learn? Our mixing engineer and advisor, Laurence Currie, told us at what we thought was the end of the EYL sessions, "You need one more song to make this a complete project." That's where "Until the Night" came from, and that's why we had to do a little international cut and paste to pull it off. So far our running time on this new record is thirty minutes, which is right in the grey area between EP and LP. Given people's generally shorter attention spans these days, we've been favouring the idea of releasing another EP, but all the recent Polaris hype has really driven home the fact that the LP is a format that still has some legs.

Being close friends, how would you describe the relationship between the members of the band now after months of playing together and creating a record?

In addition to working together, four-fifths of the band are actually currently living together in a house in Parkdale where we are recording EYL's follow up. We've done a good job for the most part of separating upstairs (where we make music) with downstairs (where we cook and clean and inevitably irritate each other). We laugh a lot so that's a good sign. I think everybody's tolerance for criticism has gotten much higher, and the competitiveness within the band is still driving creativity rather than hindering it.

What was the underlying feeling around the EP? And what goes through your mind when you think of the title Enjoy Your Lifestyle?

That debut EP for us was all about excitement. We started this project as a way of escaping the limitations of previous projects. We didn't intend to be a band and adopt everything that comes with that. Then we got excited about what we were creating and naturally wanted to share it.

Maybe it's because summer is taking hold in the city after a series of abortive springs, but I've been seeing a lot of people enjoying their lifestyle lately and I dig it. I think fellow Torontonians will know what I mean when I say we've earned this.

Just to talk more about that title, do your songs offer optimism to listeners?

There is no calculated intent to be optimistic or pessimistic, but what comes out of the H&T filter does tend to be generally pretty upbeat. We sing songs with our friends. It's hard work that we take seriously but it's also a privileged existence. We're free enough that we have a say in whether we enjoy ourselves or not. We're going to and we think you should too - it's later than you think. 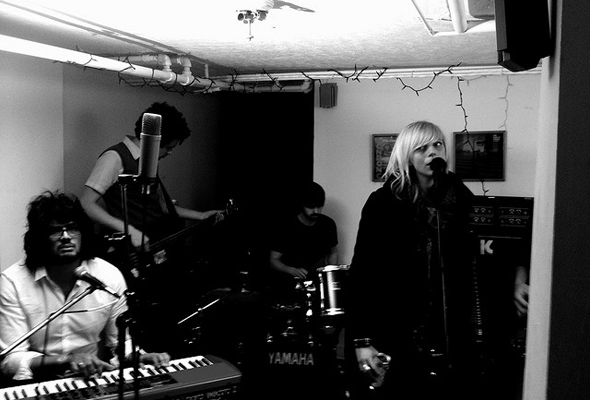 How about the long-term future of the band? Can you speak a little more about your upcoming LP?

I guess I let the cat out of the bag a little prematurely. We're going to have a new collection of songs soon. We've been thinking about an EP for two reasons. We want a snapshot of where the band is currently at it - we want these songs to still be fresh by the time we get to share them with you. We also think that given the dizzying amount of things competing for your ears and your attention, an EP is a more manageable quantity of music these days. Although as I said before, given all the Polaris chatter that's been going on recently, it's clear the LP is not going anywhere.

What are Hands & Teeth hoping to bring to NXNE audiences?

We're bringing a soundtrack for a waking city. Get some sleep while you can.