Of Montreal's Canadian love-in at the Phoenix

American psych-pop freaks Of Montreal payed tribute to their Canadian neighbours in their own special, idiosyncratic way.

The show kicked off with a skit featuring a superhero in maple leaf-covered spandex rescuing a U.S. counterpart from a marauding bad guy. Later, our Canadian protagonist returned to magically convert some angry homophobes into left-wing peaceniks. You got the distinct impression that the band had been following recent Canadian political events, and wanted to show where their allegiances lie.

With all the wacky theatrics and surreal allegories though, it's easy to forget that Of Montreal write great music too. In recent years they've been suffering from "Flaming Lips Syndrome;" when a band's reputation becomes dominated by the extravagance of their circus-like showmanship. That's all very well, but on this tour â in support of current E.P. "Thecontrollersphere" â Of Montreal seem to have discovered how to produce a hard-rocking live band performances to underpin all the pretense 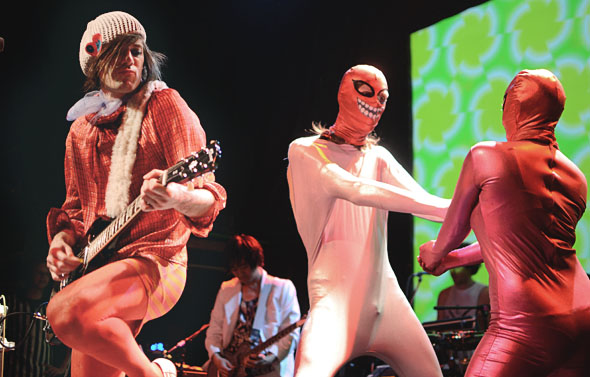 With a set drawing from the classic "Hissing Fauna Are You The Destroyer?" album as much as last years "False Priest," the band were consistently funky and tight. The moments when they reached a sonic intensity to match singer Kevin Barnes' dark lyrics were particularly impressive. It was great to hear the them unafraid to disrupt the fun, party vibes with a scary noise coda on new track "Slave Translator."

Plenty of whimsical diversions kept the crowd entertained. Barnes left the stage and band member Davey Pierce sang an 80s-inspired party jam called "Get Strict," backed up by support band Painted Palms. A serendipitous moment occurred when Of Montreal took a brief break from the stage while a crooner appeared to sing "My Funny Valentine," only for a stage-invading audience member to grab the mic and deliver the song herself with considerable aplomb. 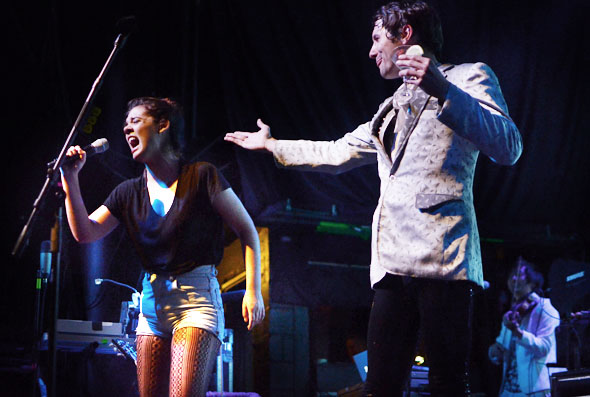 I've found that, like a powerful narcotic, Of Montreal's music can induce a first-time high that is difficult to replicate. And a great run of songs in the final stretch of the set got pretty close to that elusive feeling. "A Sentence of Sorts in Kongsvinger" was spectacularly exuberant and by the time Barnes sang "mood shift, shift back to good again" on "Heimdalsgate like a Prometean Curse" the dopamine in our brains was flowing freely.

Closing song "She's a Rejector" saw Of Montreal fully succumb to the threat of chaos. A wrestling match broke out and the band crowd-surfed off stage, with the music descending into noise until only a lone fiddler was left. As we began to recognize the anthemic strains of "O Canada" coming from his violin, it was obvious that Of Montreal's love for the country that gave them their name was fully reciprocated. 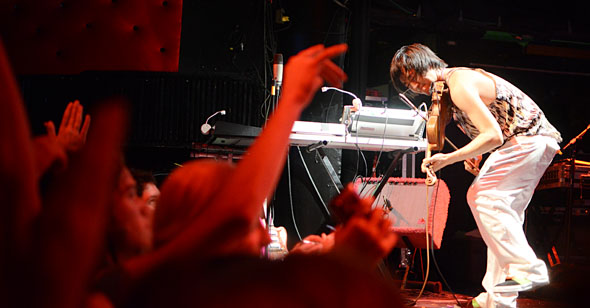