This Is The Lie marks Rob Moir's first recording as a solo musician. The five-track EP highlights the artist's song-writing, as he ventures into the folk-pop genre without completely abandoning his punk persona (as the once front-man of Toronto band Dead Letter Dept.) Moir demonstrates his easygoing personality and modest charm in songs like the title track "This Is the Lie" and "A Love with No Past." In our interview, Moir talks about his new record, traveling and his recent transition to performing solo.

I read in another interview that you're fixated with maps, and there's a sense of a voyage theme on your new EP. Can you talk about the inspiration for this record?

The title 'This Is The Lie" came from that old "this is the life" saying of resort vacationers who scheme ways of becoming wealthy and sipping marguerites on the beach for the rest of their days. I cutely dropped the 'f' and focused loosely on the theme of 'lies' that stemmed from recent experiences with love, and the false sense of being 'free' while traveling in times of globalization and package holidays. I wrote most of the songs while riding a bicycle around Europe solo for four months in 2008. Taking life a little slower and the crazy experiences I got myself into on that voyage certainly set the tone for those songs.

How about going solo? Was it a tough decision? And how do you feel you've changed working on this record alone?

Going the solo route was an easy decision as I sincerely missed touring, which got harder with a full band due to others work/romance commitments. I don't think I'll ever get comfortable with my name or face being on posters or album covers however. The most noticeable change of going solo was being 'over the moon' excited about playing music again. It's such a thrill stepping on stage in front of strangers with only an acoustic guitar and the challenge of winning them over. That never seems to get old.

One of the ways I describe this album after a first listen is that it's free-floating folk-rock. How would you describe your music?

Sure I'd agree. Sonically it's folk-rock with a little alt-country. It shows a side of my song-writing that sticks to a traditional verse/chorus structure, which comes and goes with me record to record. However, as hidden as it may seem, it still feels like it has some punk rock spirit lyrically, and still takes chances. 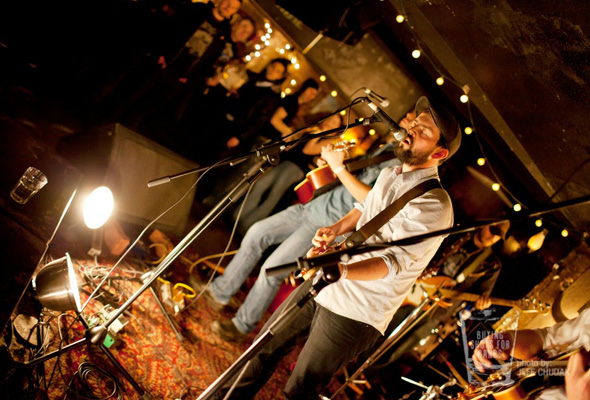 How much of This Is The Lie was just you; how much of it was a collaboration?

I really like working out my songs with a small band. Musically speaking, it's where I come from and I often write with accompaniment in mind. For this record I wrote all the lyrics, song arrangements and most melodies. However, the record would not sound the way it does without Harley Haskett and Mike Leblanc, both multi-instrumentalists who wrote their own parts and contributed backing vocal ideas. They were essentially the first to hear a song and their excitement pretty much dictated whether or not a song went ahead or not.

What did you enjoy most about making this record? And can we expect a full LP anytime soon?

In some ways my current EP feels like a first record for everyone involved. A first for producer Lynne Dubuc (who did a fantastic job!), and also for Harley and Mike who were playing and recording some instruments for the first time (accordion, slide guitars, banjo). For me, it was the first time where I actually had to sing well. Before this record my musical history was years of singing in snotty indie-punk bands. I certainly enjoyed the fact that it felt like a graduation of sorts for me making it. My parents said they liked that they could finally understand what I was singing. Not sure if that is a good thing or not. As far as a full length LP, it looks like there will be one in 2012!

Catch Rob Moir at Horseshow Tavern on June 6th and also at Dakota Tavern (part of NXNE) on June 15th. You can purchase his EP This Is The Lie on MapleMusic.

Below, grab a free download of the title track "This Is The Lie".