In The Window: Autechre, Bibio, Oi!

For this week's In The Window, I paid a visit to Slinky Music on Queen St. W. Slinky offers both vinyl and CD's that cover a variety of Afro, Latin, disco, and dub, as well as an extensive collection of techno. The store is basically a DJ's dream.

Slinky Music shares a space with Moog Audio, so the whole store experience is interesting. While walking through the its clean layout, you're able to pass a variety of vinyl and CD's on the same wall as turntables and recording gear. At a certain point it becomes impossible not to want to learn how to spin. 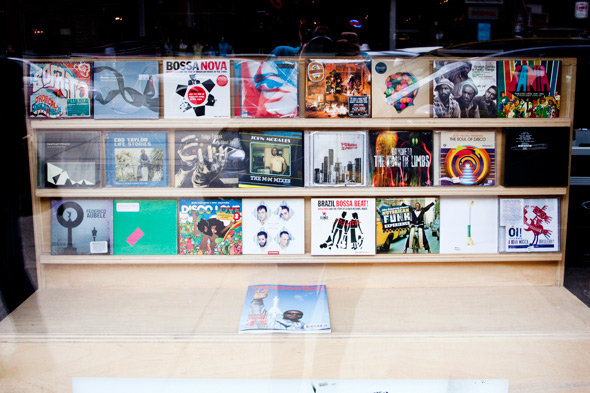 While at the store I spoke with Slinky employee, Lucie, and she recommended...

Autechre - EP's 1991 - 2002
"The set contains reissues of a lot of exciting 90's peel sessions that a lot of people have been trying to find. The set is also beautiful aesthetically - it's one of those sets that people who don't normally buy CD's would want to pick up."

Bibio - Mind Bokeh
"A really cool experimental pop album. It's interesting because they came from a folk/electronica feel and this one is more beat driven with a hip-hop influence."

Various Artists - Oi! A Nova Musica Brasileira!
"A collection of brazillian with a psych influence. The album is influenced by the likes of Kraftwerk, Massive Attack, Talking Heads, Beastie Boys and Sonic Youth"

Lucie then explained that they regularly receive obscure, rare albums and recommend joining their mailing list (e-mail paul@slinkymusic.com) to keep up to date as they arrive. She also explained that they are able to take orders on underground records that may be hard to find.