Mount Kimbie, the electronic duo made up of Kai Campos and Dominic Maker, rolled through town to play Wrongbar on Friday night. Unfortunately, despite considerable hype and six months of additional touring, the duo was unable to build on the promise that their first show in Toronto at the Drake had created.

Mount Kimbie took the stage at close to 1 a.m. -- much to the dismay of their anxious fans. A lengthy sound check followed, though whatever issues were plaguing the soundsystem remained unresolved -- it looked as if some of the monitors weren't working, but not being an expert in these things I can't be sure. Moreover, I don't think I have ever seen an artist wince in pain due to a poor vocal mix or monitors that weren't cooperating, but that's what I witnessed on Friday night. You could see the frustration on Kai's face, and after four or five songs, both he and Dom simply gave up. All told, the duo maybe played for at most forty-five minutes.

It's really unfortunate that the duo decided to cut the set short, because in the time since their last Toronto show, it's obvious that touring has really helped them hone their performance skills. 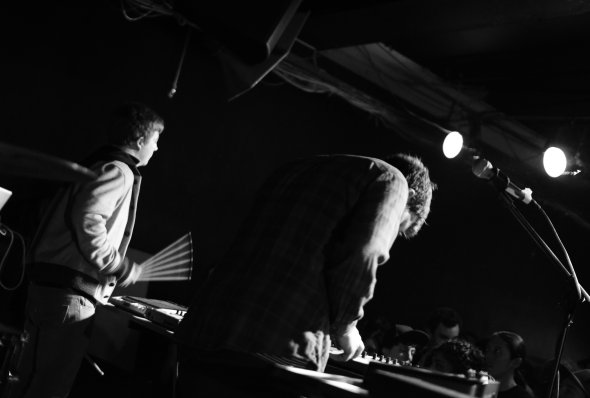 Instead of simply playing through some of their songs like a lot of other artists do, Mount Kimbie play long vignettes that in some way incorporate their recorded material -- some of these vignettes are obviously rehearsed, while others seem to originate from onstage improvisation. In any case, at their best, they establish a pattern of build-up and release that's immensely rewarding. At several points throughout Mount Kimbie's performance, the audience had a collective "a-ha" moment as seemingly unrelated sounds came to form a song they recognized and loved.

When the band played at the Drake, some of these vignettes dragged on for far too long before giving way to a song that the audience was familiar with. In contrast, at Wrongbar these vignettes were leaner and had a sense of urgency to them. What left me especially hopeful was that the band was able to achieve this streamlining of their sound without taking any of the complexity away from their sound.

Unfortunately, with a set that lasted only forty-five minutes it was difficult to leave the show with anything but a negative impression. Indeed, the pattern of build-up and release which had served the band so well in short bursts was nowhere to be seen over the course of a whole performance. What should have been an excellent show, instead ended with no climax, only an abrupt ending and a lot of confused faces.

Words by Igor Bonifacic / Photos and Video by Alex Kamino