Gold Panda at the Drake Underground

At the Drake Underground on Wednesday Gold Panda treated us to his unique perspective. The London-based producer's East meets West aesthetic permeated not only the exotic sounds he coaxed from his laptop, but the visuals projected behind his bobbing, hooded head. Neon signs and temples hinted at Gold Panda's time spent living in Japan, while blurry images of soccer pitches and rainy window panes reminded us that he is operating in a distinctly English electronic tradition.

With samples and beats chopped up as exquisitely as sashimi and a healthy dose of sub-bass, Gold Panda- or Derwin Panda to his friends- also stands at the crossroads of current musical trends. The homespun nostalgia of chillwave meets a club-friendly four-to-the-floor beat, luring both bearded introverts and fashionable party people into the broad church of his sound.

At Wednesday's Toronto show Gold Panda erred on the side of danceability, a tendency brought into sharper focus perhaps by his recent tour schedule. By the time the infectious vocal snippets of "You" arrived, the party was well underway. And while many Torontonians are trying to forget about "Snow and Taxis" at this time of year, the track felt like an anthem for the coming of spring: a sunny dancehall beat moderated by icy synths and twinkling bells. 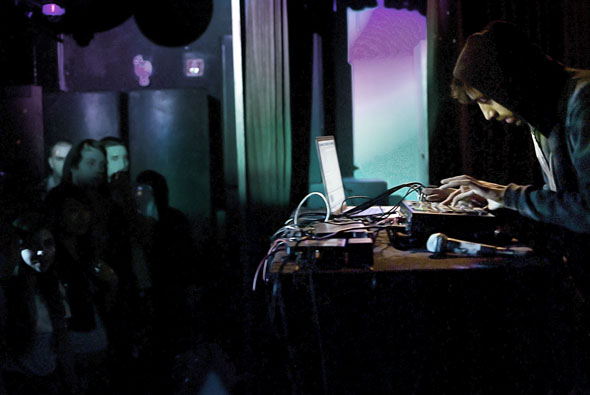 Despite owing a lot to the experimental Warp Records sound, Gold Panda rarely showed his indulgent side, only occasionally entering challenging, glitchy territory. Perhaps the approachable psychedelic dance music of Four Tet and Caribou is Gold Panda's closest musical cousin, or maybe he offers a wilder, overgrown version of The Field's stripped back mood music.

Some tunes on display, such as "India Lately" were as busy as a Mumbai back street, but a Zen calm was never far from the surface. In striking a mellow balance between making music for the head and the heart, Gold Panda delivered a near-perfect Wednesday night dance party.