Something New gets second season on AUX

Last night there were a couple of quote-unquote "Something New"s for me. I was drinking in a bar that had a cat lounging on a loveseat. A woman danced in a wall sporting nothing but fashionable lingerie while a number of Toronto bands played, including Ian Blackwood of The Artist Life. And a music TV show with AUX TV called Something New launched its second season.

Many a reader bemoans the fall of MuchMusic. And by The Fall, I mean, the fact that Much once played videos that actually concentrated on music, not The Vampire Diaries. It's almost sad that it's a big deal that The Wedge is coming back to Much, and for that to even happen, you need a Toronto heavy-hitter like Damian Abraham to host. 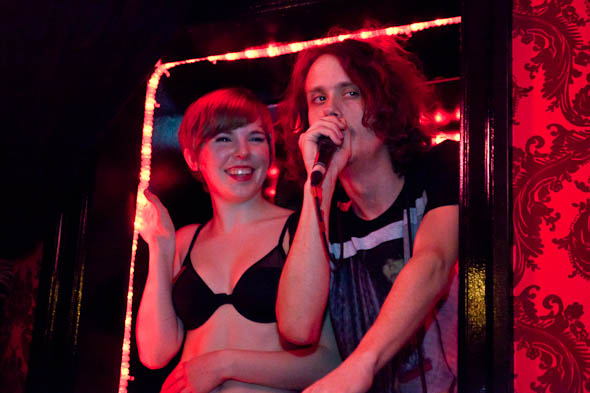 That's where AUX TV comes in. I don't watch AUX on actual TV, but on the Internet like everybody else. And as I stumbled around a particularly rammed Cherry Cola Rock 'N Rolla (yes, that's the bar's name) for the launch party, I realized that a lot of people watch AUX. Some of which might have heard of Something New's affable, Toronto-based hosts, Korey Schaefer and Jordan Bortolotti. Or seen their pretty faces on said program, which lassos 55,000 to 70,000 viewers a week. Those are the viewers, if I may infer, that once were MuchMusic fans interested in music culture.

To get a second season when it comes to music television actually means something for Canadian programming. And good on Something New, because they stick strictly to music - including its endless caveats - investigating topics like what indie actually means, why beards and music mix, commercial hip-hop, yeah, you get the drift. And they have some pretty solid pull with contemporary musicians, with the likes of Cee-Lo Green, Against Me!, Bruno Mars, Ke$ha, Gaslight Anthem and even the Backstreet Boys. (Backstreet's back, baby!)

I sat down with Schaefer at the launch party, with the aforementioned cat and scantily clad dancer, to discuss the second season, music television, beards, and where Toronto plays a part in the mix.

How did you guys wrangle a second season anyway?

Dreams. Passion. Hard work. Magic. No, I guess we do something unique on AUX TV than music television in general. We approach topics on a thematic news and journalism angle and no one else is doing that on television, period. There isn't anyone else like us trying to approach topics thematically like we do.

What is MuchMusic today and why is there this void to be filled in televised music journalism?

Well people in my generation grew up with context and editorial opinion that came with our music. When you turned on the TV and they played something for you. Immediately after, someone came on the air that you respected and told you why you should like it. That doesn't really exist anymore. Outside of The Wedge that just re-launched after x-amount of years being gone, nothing else exists on MuchMusic like what's on AUX and like us. And we're not tastemakers telling you to go listen to this or this is the record of the year. I ask 'What the fuck does punk rock mean in 2011?' And I ask, 'Why are we as a society so obsessed with musicians when they die?' And I ask, 'Why is love such a massive muse for artists all around the planet for the last 300 years?' As a viewer you kind of get to live vicariously through me as a music fan. I'm not a musician; I'm a music fan. And I'm genuinely interested in everything associated with the music world. I get to sit down with these contemporary artists and ask these questions.

Like, have you ever sat down and listened to a record and asked yourself, 'Why is this guy so obsessed with socio-political stuff?' I get to sit down and ask these broader questions to a whole myriad of artists. Not only is that what's missing from music television today, there really isn't a lot of context-heavy, question-riddled music television. 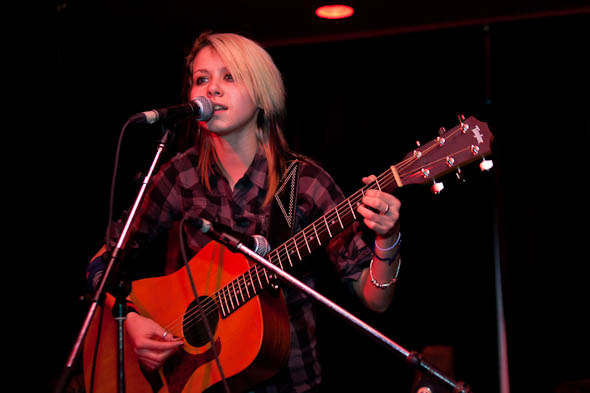 That's a good segue. A lot of the stuff you guys do, like you say, is talk about concepts and themes in music. How do you guys come up with the basic themes that you are delving into with these artists?

Conversation. There's not like a group of mad scientists sitting around a table thinking about what's going to pique people's interests best. It's me with beer sitting around a record player with my friends shooting the shit talking about music - it just comes naturally. Like specifically, if you're listening to classic rock records, everybody has a fucking beard. It totally makes sense to investigate the idea as to why are beards so popular in rock 'n' roll.

Ultimately it's very natural, it's myself and friends talking, and when it comes time to actually put the show together, we just pick out the good conversations and interesting angles. 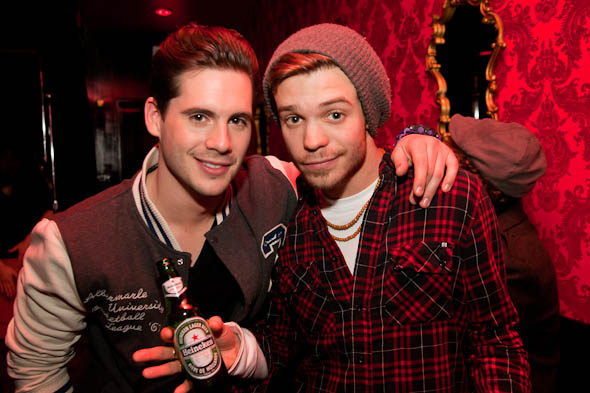 So, in your opinion, as a music fan, how is Toronto's music scene?

Well, I'm not just a music fan; I'm also incredibly traveled. I've hitchhiked across the country twice. I've lived in Vancouver, Victoria, Montreal, Ottawa and now I've lived in Toronto for the past three years. I've kinda seen and heard it all. Toronto, specifically, probably has the healthiest music scene of anywhere in Canada. There's something about the city that draws people, and it's definitely not the rent, because it's exorbitant to live here. Musicians and people in the media come to Toronto because they want to do it for real. Like you go to Montreal if you're a avant-garde noise-rock experimentalist and you're OK eating out of a can of tuna for the rest of your life. And that's not bad. But everyone here in Toronto is serious. And I think that makes art better, when you're serious about it and want it to touch as many people as possible. It's a very driven city. And it makes it better.

The artists, specifically, take themselves more seriously, and ultimately, I think that creates better music. I mean, why would you want to do anything half-assed to begin with and attach your name to it?

What can we look forward to in the second season of Something New? More beards?

Not more beards, unfortunately. I would love to dig into more beards though. This season is exponentially better than the first. It's a lot more out there, a lot more challenging. I think you can just expect more. Bigger, badder ... ah shit, don't use "bigger, badder," that's so lame. Now you have it use it, now that I told you not to. [Laughs]. If you caught anything from the first season, the second is a lot more grandiose. We've really earned the trust of the people we work with and they're willing to open up more. We got a lot more serious. You know what, there's a lot less humour in season two, a lot more journalism, but there is still that light-hearted take.

We have an episode that investigates society's obsession with musicians and artists after they have passed, like Elliott Smith. We have an episode about what is punk rock and we sit down with the Sex Pistols, Strung Out, Pennywise, The Artists Life, Gaslight Anthem, and another 20 contemporary artists and lay this question at their feet. We also go on the road for 24-hours with Abandon All Ships, Canada's hottest, newest metal act, who are currently scaling the MTV U.S. charts right now. We go on the road with them and it's absolute insanity.