On love, music and self-publishing a book in Toronto

Fittingly released just before Valentine's Day, Our Liner Notes is a coffee table-style book that explores the degree to which music acts as a romantic catalyst via a series of anecdotes from Toronto-based couples. Designed to be flipped through at random rather than read cover to cover, the book keeps the text segments short - each anecdote is between three and four paragraphs - in favour of a more visually oriented reading experience. And this is perhaps it and its author's greatest success: it doesn't try to be something it's not. Written and published by Justin Lee, Our Liner Notes intends to offer "tiny glimpses into the dynamics of [these couples'] relationships and the enormous role which music has played in uniting them."

Self-publishing a book is no easy task. Beyond the financial burden, there's the time and energy it takes to see the project through to fruition, both of which are generally invested over and above one's so-called day job. As such, I'm generally keen to chat with local authors about their efforts, especially when their projects sound intriguing. After spending a bit of time with Our Liner Notes, I chatted with Lee vial email about his book, what inspired him to write it, and what role Toronto has to play in all this.

I know that you have a blog, which goes by the name My Liner Notes. To what extent is this book an extension of that project?

My Liner Notes focuses on stories that cover the general theme of experiencing music and its impact. So yes, Our Liner Notes is definitely an extension of this idea, honing specifically on the effect music can have on couples.

Although it may sound funny to ask, why a book? Given that the blog platform gives you more options as far as media goes - I'm thinking particularly of the ability to embed songs and videos - what do you think the main differences are in terms of the reading experience?

I've always loved print. The tangible quality of it -- the texture of the paper, the scent of freshly printed pages -- is an experience that reading binary numbers on a monitor can never truly replicate. Even before I started the blog, I always envisioned doing a book. Although reading is a mostly individual experience, much like music, I like to think that couples will read Our Liner Notes together. Also, I've always had somewhat of a love-hate relationship with technology; on the one hand its made everything more convenient and accessible, but it's also taken the romantic charm out of it all.

The stories that make up Our Liner Notes focus on the role that music plays in establishing (and maintaining) the bond that couples share. What gave you the idea to frame the project in this way?

I think everyone can relate to this universal experience of sharing music with another person, and particularly in a romantic context. Some of my favourite films and books always seem to contain this sentiment. My most memorable relationships have been ones that I've shared a common passion for music with the girl. So I think it's something I have always been conscious of, and has always been a subject that has interested me.

How did you select the people featured in the book? Was there a desire to eschew famous people in favour of so-called everyday folk?

A few of the couples were friends and acquaintances. The rest were referred to me by those couples, as well as other friends. I guess the only commonality I was looking for is that the couples were really passionate about music, that idea that listening to whatever is on the radio is never an option. Originally, I was trying to get a range of people from various demographic backgrounds, but I found it incredibly difficult to find music-obsessed young couples and older couples. I almost posted an ad on Craigslist before I eventually talked myself out of it. I was worried the ad would come across as some kind of perverted proposition for a threesome, and god knows that Craigslist doesn't need another one of those ads. 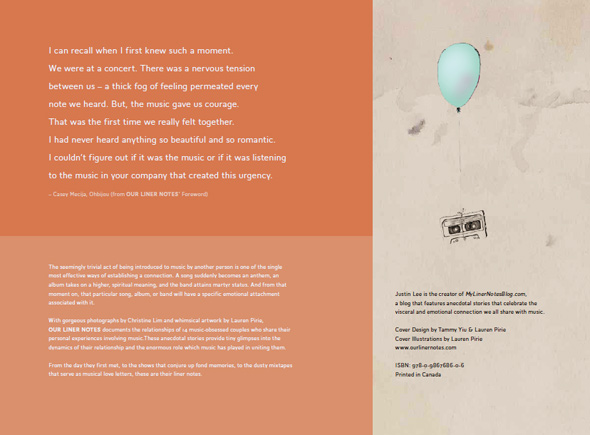 Is everyone featured in the book from Toronto? Do you think the city has a role to play in Our Liner Notes?

All the couples are from the Toronto area, although one couple (Joel and Anne) now live in Hamilton. Toronto definitely plays a huge role in the book. I think anyone from Toronto would read this book and recognize that it has a Toronto feel to it. All the portrait photos were taken in local parks, alleys and streets, and there are constant references to Toronto concert venues and bars. But since it has such a universal theme, I wanted to ensure that someone living in London or New York or Madrid would be able to pick it up and still feel completely in tune with it.

Tell me a little bit about how you went about getting the book published. How did you fund the project?

At first I considered going through a traditional route and pitching the idea to publishing companies. But I've always been hands-on and DIY in my approach to writing. As everyone knows, the publishing world is incredible challenging, and I didn't want to be discouraged by rejection letters, especially when I knew this was such a great idea for a book. So I decided to entirely invest in this project on my own. Fortunately, I have so many talented friends who were willing to contribute: Tammy Yiu designed the book, Christine Lim shot the portrait photographs, and Lauren Pirie did the illustrations. These three women are the reason why the book has such a beautiful aesthetic. If any of them need a vital organ at some point, I will be more than happy to donate one of mine.

What was your print run? Where can one buy the book and for how much?

We printed 400 copies for the first run with the anticipation that we would double that figure for our second run if the demand is there. The book is currently being sold for $35 at various Toronto music and books stores, including Soundscapes, Sonic Boom, Penguin Music, Zoinks Music & Books, Tabula Rasa, and Kid Icarus (a full list of participating vendors appears on our website). For anyone outside of the GTA, it can be purchased through the website via Etsy.

Who do you imagine is your ideal reader?

I think anyone who loves music and has shared that passion with another person at some point in his/her life will be able to relate to this book. And quite frankly, isn't that everyone?