Ben Veneer's self-titled album plays in the background. His deep voice fluctuates, following each guitar strum, and sometimes his voice flows with each piano stroke. His songs are poetic, taking on questions and perspectives of life and meaning: some lyrics sound like phrases you once heard your grandparents say. His album is a collection of unhurried, beautifully-crafted folksongs that adjust to different interpretations. It's an honour to talk to Ben, who I believe is a paragon of Toronto's music community.

Many musicians move to Toronto because it's a nesting ground for art and music. What is it like to be singer and song-writer in this city?

I love it. It's great. I've heard people say that it is a tough scene, and it's true that there's a lot going on all the time, but that also means that there is more to experience. If you just play as often as you can and with whoever you can, you can absorb much more than you could in a smaller pond.

I don't think Toronto is as much of a "scene" as some make it out to be, either. At least not in my experience. I haven't done any huge tours or anything, but just the other day I was talking to Thom Gill about this very subject, he was saying how he loved coming back to Toronto just because people tend to ignore genre divisions here.

How old were you when you started to write songs and at what point did song-writing become a world for you?

I had been playing music since high school, but I didn't really start writing songs on my own until a few years ago. My role had always been a supporting one - I knew a bit of music theory so I was pretty good at writing parts to pre-existing songs, and I was totally into the songs my band wrote so that was good enough for me. The interest in writing slowly grew. I stopped listening to bands so much and became more attracted to the music of individual writers, authors and poets, too. For some reason what people say when they are alone became very interesting to me. 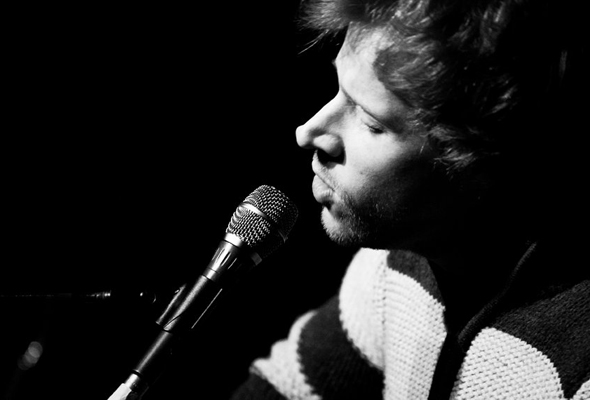 Your music seems to have this sort of "collected wisdom" quality, with lyrics sounding like phrases and lessons passed on by parents and grandparents, something I find comforting. What was your process of writing these songs and where did this kind of "voice from the past" come from?

Ha, "voice from the past". I think it comes from the past, literally, I tend to listen to older music. But what I think you might mean is the echoes of parents and grandparents voices that I'm sure everybody can hear in their head. They can be annoying sometimes. My parents and grandparents on both sides were married their entire lives, and only separated by death. I remember a conversation with my mother where she revealed me part of her parenting strategy was to make sure they both agreed on anything before telling it to us. The first things that I heard in life were the result of a very concentrated effort.

People think that your musical style resembles Leonard Cohen and Gordon Lightfoot. But I also hear Bob Dylan: his ballads that were apparently written for his lover (Suze Rotolo). Where do you think your musical style and song-writing comes from?

One thing about music is that there will always be more going on in the past than there is in the present. In popular music, I think it's fair to say that most of what's going on has a root in the 60s and 70s, at least in the English speaking world. I remember a fairly recent Time Magazine interview where Van Morrison actually said flat out that nothing new is happening in the industry at all today. I don't believe that of course - local music can have a large effect on peoples' lives as well. I see it here in Toronto, but you can't deny that much of the music that broke out at that time was unlike anything that had happened before, in a way that hasn't been repeated since.

I don't think musicians were necessarily more brilliant back then, but the audience that fed them was giving them a lot of energy - an audience dramatically larger than any before, for whom the world was still very new. I remember reading an interview where Bob Dylan goes "I own the 60s. Who's going to argue with me? I'll give them to you if you want 'em."

He can be hilarious. If you're writing songs at all you have to deal with him whether you like it or not. Lucky for me, I like him a lot. I'm afraid of his influence though. I'm afraid of getting lost in the crowd of Dylan imitators, which could include any solo act who has written a song with song-book guitar chords since 1965.

Your father was a church organist. In the track "Morning Star" you sing the lyrics "But there's no need to fear, / I believe I'm not alone. / I don't need to know everything." In two or three other tracks, you repeat how you're "not afraid". How does religion and faith play a role in your music?

My father was a church organist and a faithful believer. Religion is always a struggle, and I don't see how it can be any other way. I don't even mean between different religions - I don't believe in that kind of struggle. The struggle is between religion - truth eternal, whatever you call it, and the fact that religion is not for everyone. And then what's that about forgiveness? You are better off to keep your mouth shut.

There's a YouTube video of Jeff Tweedy and Mavis Staples singing "Wrote a Song for Everyone" by CCR, and on the last verse, she changes the lyrics. I'm not even sure if it's an accident or what. She sings:

"Saw the people standing
thousand years in chains
Someone said "It's different now",
look it's just the same

Pharaoh sends a message
round and round the truth.
They couldn't stand - a billion people,
how can I save you?"

In "Where Does it Begin" you wrote the following lyrics: "I say death is part of life / but underneath my breath / all I know is life. / Life is part of death." How do you feel about all of the euphemisms for death that seem to make it hard for people to see past death as a "tragedy"?

Even the word "death" - what could it mean? That particular euphemism - "death is part of life" is not the whole truth because the only death that is part of life is the death of other people. Laura Riding wrote the line "Death is a very wall", which seems like a strange thing to say, until you think that she could have written "Death is the very wall," but deliberately chose not to. How do you speak about your own death? She is a great writer. She strives to find the simplest thing to say, and still she says something new.

What do you see reflected in your music? What images do you find you unintentionally keep coming back to?

My favourite track on your album is the opening song "You Can Learn to Fly". For some reason, it makes me think of my grandparents. What does this song mean to you?

I remember when I started this song - I remember wanting to say something about a particular injustice I felt - I forget what it was now even. Feeling this urge, for some reason I thought of the effect it would have if I were to act on it, which was negative, straight up. I've "been told" before myself, as I'm sure everyone has, it's a drag. Then the first verse came:

"Careful how to talk when you know what to say
and I need to hear better than I heard before.
Everyone alone unaware of the way
to be when you need to be fair."

It is interesting that it makes you think of grandparents - the "voice from the past" you mentioned before. I wouldn't go so far as to say that it is a voice other than mine - but it is true that the song was not what I set out to write, and the words were good for me to come by. Anyhow I felt better after having written it, even though literally I was still alone.

Also, check out The Neighbourhood Mixtape: Long Time Coming to listen to his track "Morning Star" and download the opening track "You Can Learn to Fly" below.