Steven McKay turns up the charm at Soundscapes

While his name might not have the cultural cachet in this city as that of a Kevin Drew or Brendan Canning, Steven McKay, has, in his own way, left a mark upon Toronto's music listeners: first, as the drummer of the Bruce Peninsula, and now as a solo artist. He, along with former Bicycles guitarist Drew Smith, played a free in-store concert this past Tuesday at Soundscapes.

While his main gig may be playing drums for the Bruce Peninsula, McKay's's talents might actually be better suited for playing the guitar. Throughout his short set, he fingerpicked his Stratocaster with the kind skill and precision that might have even made Mark Knopfler jealous. Moreover, while Steven's introspective lyrics might be simple and concise, they come off as heartfelt and thoughtful. 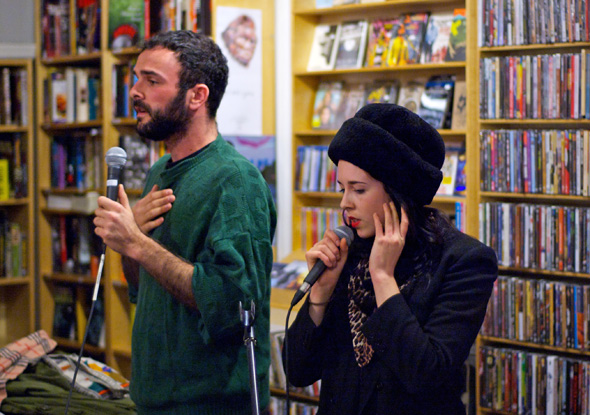 McKay also brought along an excellent supporting cast to help him out with his set. Particularly effective were Steven's two backup singers, Allie and Curtis, who really helped flesh out his vocals. This is not to say that his rhythm section was any less effective. Indeed, his drummer and bassist helped add immediacy and dynamism to some songs that might have otherwise lacked them. 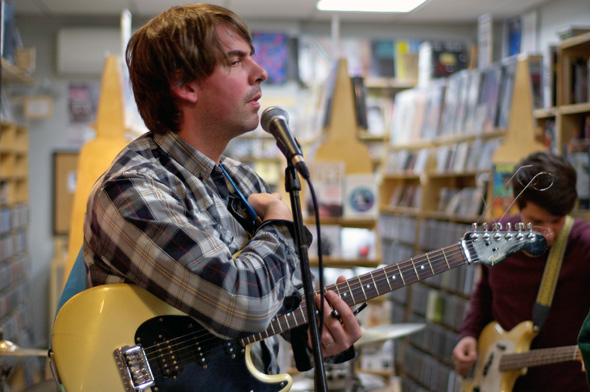 The best way to describe McKay's music and persona is to say that they are both extremely charming. This trait was on particular display when the musician related a story about how his last in-store at Soundscapes went. He told the audience that he saw Feist looking at her own record, and then, at the insistence of his wife, he approached her to ask if she would sign a record for him. After Feist agreed, McKay, who wanted to continue the conversation but was at loss as to what exactly to say, asked her what it's like to be famous. Well played.... The audience had a good laugh as McKay humbly confessed this starry-eyed misstep.

After an hour of great music I decided that I really need to pay more attention to Toronto's local acts. Thankfully, there is system already in place for me to do so. Indeed, Soundscapes deserves a lot of credit for organizing these wonderful in-store concerts. I suggest following them on Twitter so as to see when they're next in-store concert is going down. They're a great way to get to know local musicians, some of whom are quite established, in an intimate setting.

Photos and words by Igor Bonifacic