Belle and Sebastian headlined a sold out gig at Massey Hall on Tuesday night, where the Glaswegian indie pop veterans effortlessly charmed the Toronto crowd with their endearing stage personas and a near two-hour set of 60s-influenced Scotpop gems.

Local Arts & Crafts rockers Zeus were the lone opening act, delivering a powerhouse of a set to a half-filled Massey Hall. The local quartet is a remarkably fine-tuned machine; having seen them live a handful of times in the past year, I can comfortably state that they have never failed to deliver a crowd-pleasing set of catchy rock'n'roll tunes. 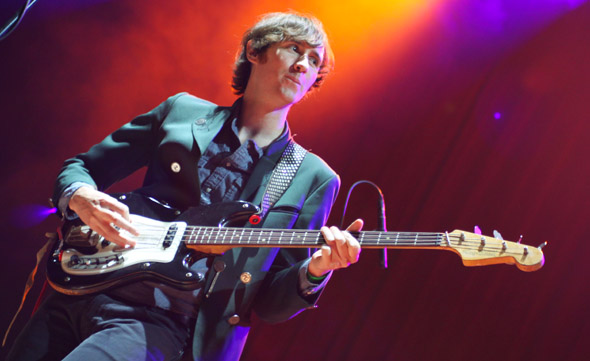 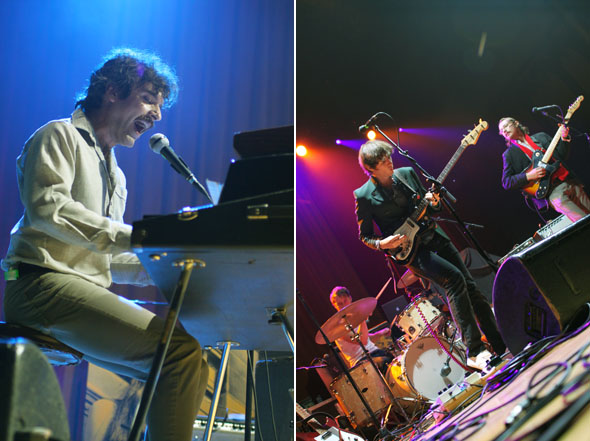 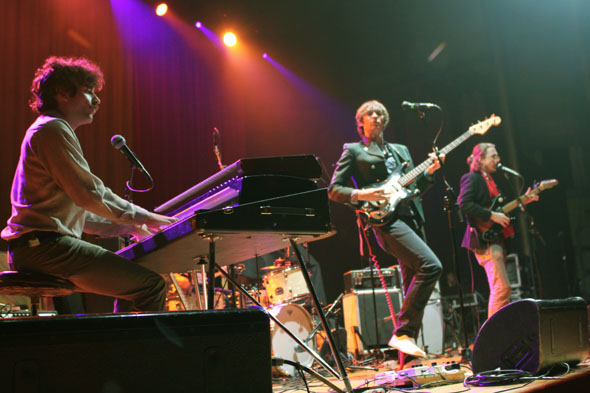 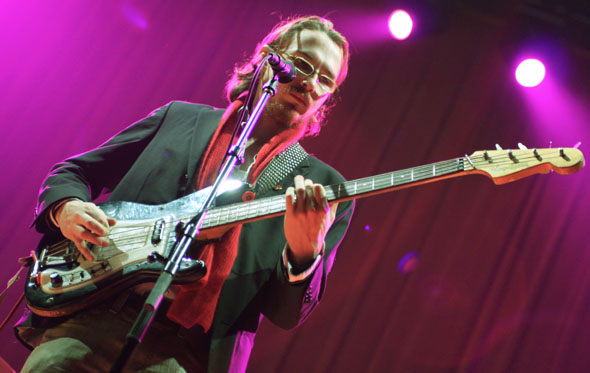 The seven members of Belle and Sebastian calmly made their way onto the dimly lit stage shortly after 9 o'clock, and as the silhouetted collective emerged they were greeted with a rapturous response from the sold out crowd at Massey Hall. Following the success of 2006's The Life Pursuit Belle and Sebastian elected to take a short break from touring and recording, so their return to Toronto was a monumental occasion for their diehard fans - not only because it has been years since their last visit, but also because they're touring in support of their brand new LP Write About Love. 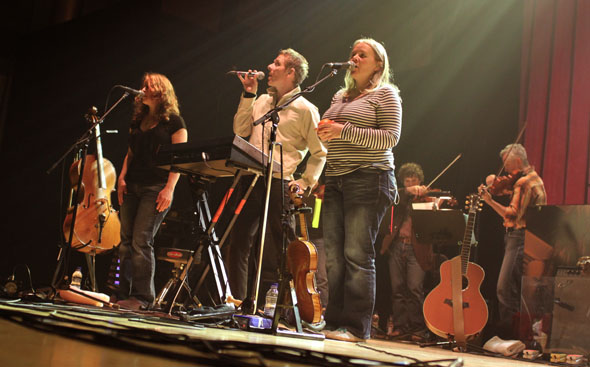 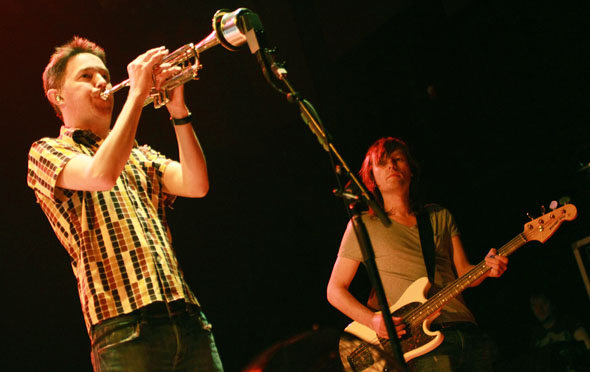 Eager to show off their new material, B&S started the night off with back-to-back performances of "Read the Blessed Pages" and "Write About Love," showing off both the melancholy and the upbeat sides to their latest album. It didn't take long before they delved deep into their extensive back catalogue, starting with the instantly-recognizable bumbling bassline of "Like Dylan In the Movies" from 1996's If You're Feeling Sinister, which prompted fans in the lower level of Massey Hall to dance their way up to the stage for a closer look. Both the ushers and security stood helplessly as the aisles and front of stage filled with eager fans, who would remain there for the duration of Belle and Sebastian's twenty-and-a-half song set. 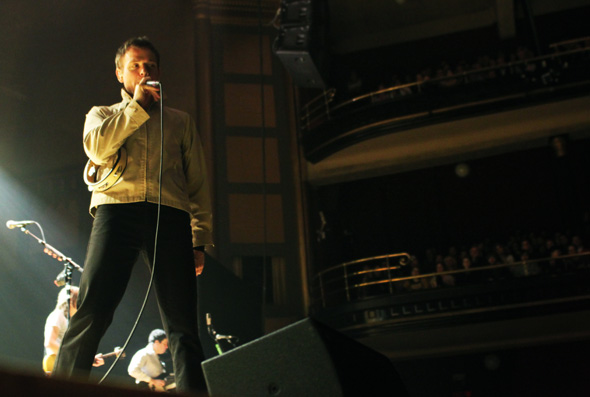 Belle and Sebastian played a handful of songs from their new record throughout the first half of their set, with fan favourites like "The Loneliness of a Middle Distance Runner" and "Piazza, New York Catcher" sprinkled in between.

Stuart Murdoch was in top form on Tuesday night - his mild-mannered demeanour, casual style and generally unassuming stage persona makes him one of the most approachable and pleasant frontmen I've ever seen live. 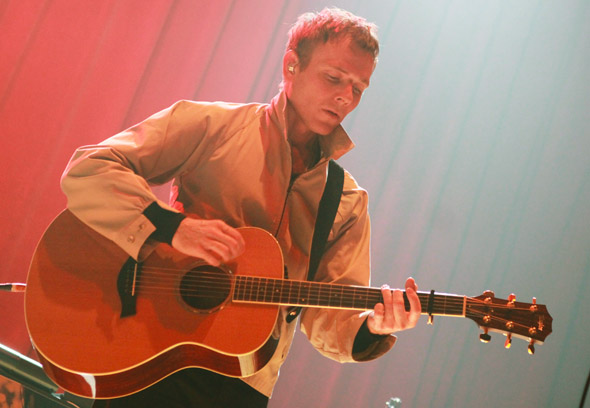 After applying an audience member's lip gloss before playing "Lord Anthony", Stuart knelt down at the front of the stage midway through the track, allowing a fan to apply mascara to his eyes as he sang the second verse.

Murdoch was flanked by guitarist and vocalist Stevie Jackson and violinist/guitarist/vocalist Sarah Martin. Though both lended their vocal talents to countless songs throughout the set, it was Jackson that was the more talkative and interactive of the two in terms of audience interaction. Stevie led a rocking cover of The Kinks "You Got Me" midway through their set at the behest of an audience member named Dave, who was singled out by Murdoch to make a special request after the singer inquired if any member of the crowd had come to the show in a bad mood. 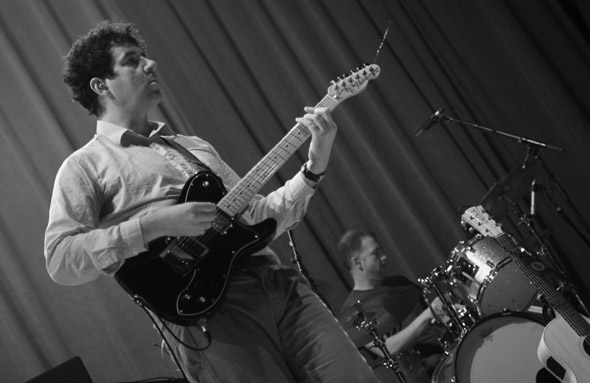 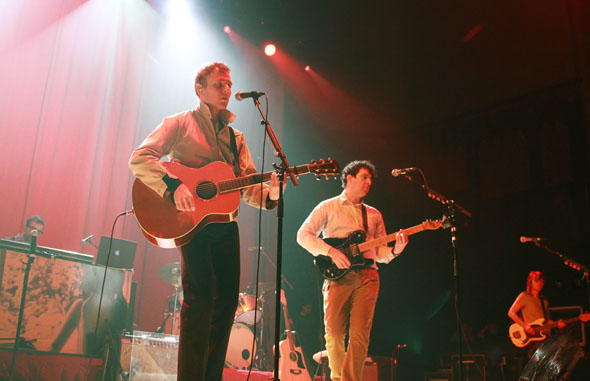 Throughout the night Murdoch joked with the crowd, shook hands at the front of stage, and invited lucky fans on stage to dance with him, first during "Sukie in the Graveyard" and later for "The Boy with the Arab Strap", after which he hung medallions around the necks of each of his back-up dancers to thank them for their services.

Roughly an hour into their set, a crew member emerged from backstage and handed Murdoch a plastic Dollarama bag filled with foam footballs. He signed a few and tossed them out to the kids in the audience, jokingly remarking that it is usually at this point that children begin to get bored, so he throws things at them. Since there weren't many kids in the audience, it wasn't long before he was chucking footballs blindly into the upper balcony. 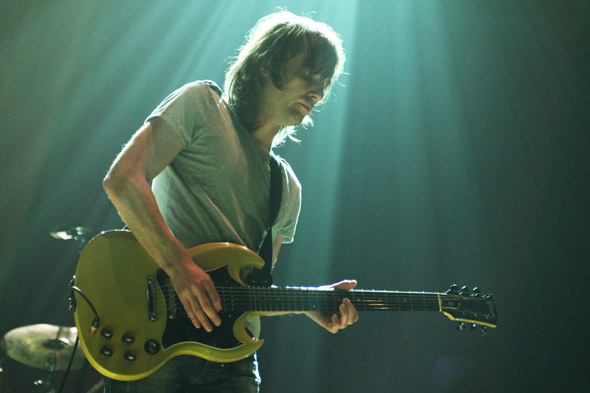 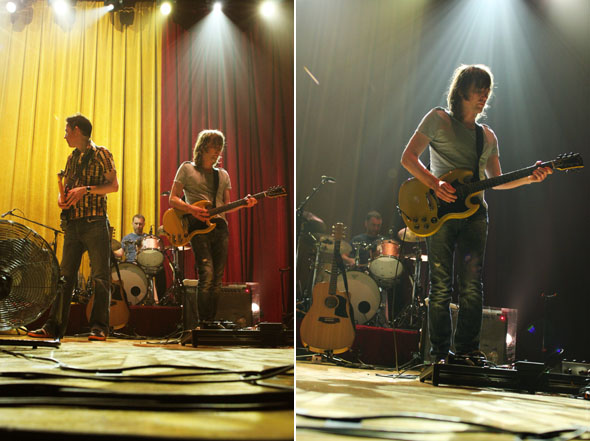 Belle and Sebastian closed out their set with a pair of tracks from their acclaimed 1998 LP The Boy With the Arab Strap: "Simple Things" and "Sleep Around the Clock".

They triumphantly returned to squeeze in a two-and-a-bit song encore featuring a teaser taste of "This Is Just a Modern Rock Song" followed by full renditions of "Judy and the Dream of Horses" and "Me and the Major." After receiving the second standing ovation of the night, it was clear just how much Toronto appreciates a visit from Belle and Sebastian.

Read The Blessed Pages
Write About Love
Like Dylan In The Movies
I'm Not Living In The Real World
The Loneliness of a Middle Distance Runner
I Want The World To Stop
Lord Anthony
Sukie In The Graveyard
You Really Got Me (The Kinks cover)
Piazza, New York Catcher
I Didn't See It Coming
I'm A Cuckoo
(I Believe In) Travelin' Light
Dog On Wheels
The Boy With The Arab Strap
Legal Man
Simple Things
Sleep The Clock Around
------
This Is Just A Modern Rock Song (not played all the way through...)
Judy and the Dream of Horses
Me and the Major