Arcade Fire was a far cry from the suburbs last night. They were on an island. Toronto Island to be exact.

As the band got ready to hit the stage, their third album, The Suburbs, became the number one selling album in North America. And after having Terry Gilliam film their Madison Square Garden show, they also bookended Lollapalooza last weekend. In other words, the Montreal collective are -- ah damn, I have to say it -- on fire.

And the show didn't disappoint the legions of fans that journeyed across the harbour for an intake of the indie gods pouring on the energy. The hour-and-a-half wait for the ferry after the show, on the other hand, wasn't so hot. (Commenters, like last time with the beer lines, do your thing below.) 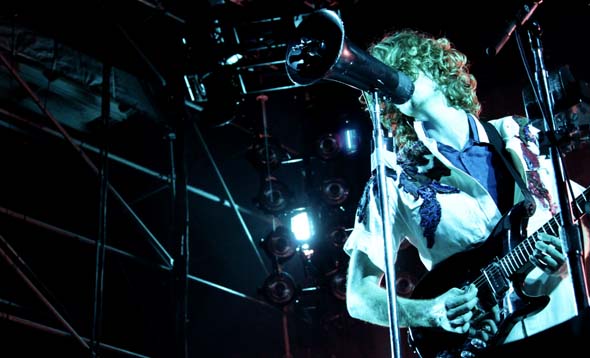 Arcade Fire is built for festival shows. Their music, especially the anthem-steeped Funeral, is stuffed with building crescendos and oh-oh-ah sing-a-longs. I first saw the band perform at Hillside Festival in 2005 right after Funeral blew up. Back then they closed with "Wake Up" and would then proceeded to march through the crowd with instruments in tow eventually forming a drum circle. (Yeah, it was Hillside). 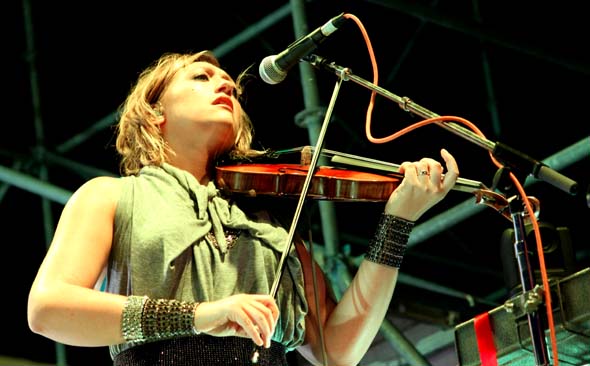 With eight people on stage last night, including one who was wildly running around stabbing a snare drum, the energy was palpable. And standing there in the massive audience (well, in the beer tent), I realize that Arcade Fire moves you not just physically but emotionally as well. It's at once a personal and a collective experience in this milieu.

Perhaps the best example of this came when I spotted a couple people with tears streaming down their cheeks. (One lad in the beer tent, Adam, I believe, came up to me worried. He thought I wasn't having a good time as I wasn't flailing my body parts, but then realized I was madly scribbling notes. He gave me the go-ahead when I explained.) 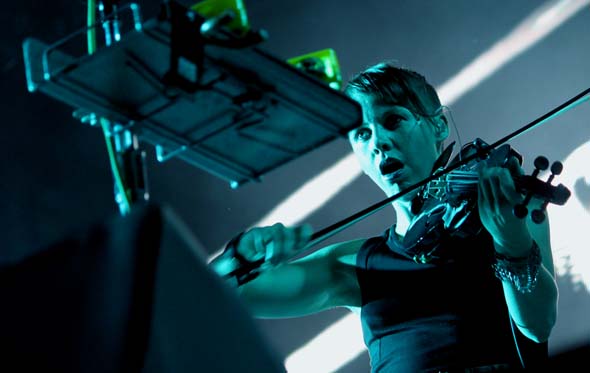 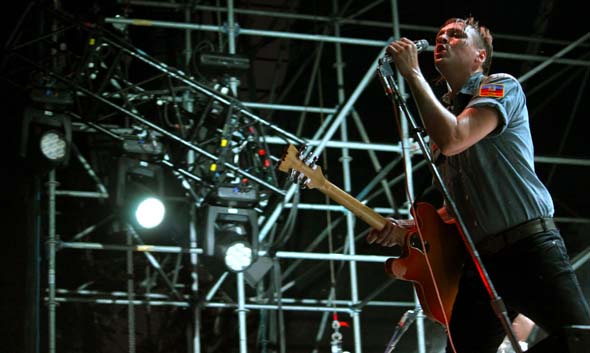 With a large screen towering behind them (just like their Madison Square Garden show), moving images of children's faces, palm trees, the suburbs and a car driving on a highway were spliced with shots of the band playing.

Their sound was spot-on and the new tunes from The Suburbs, which nearly half of the set consisted of, were already well-honed. Tracks like "Rococo" and "We Used to Wait" resonated in particular. They jammed out some songs, including Régine Chassagne's (who was decked out in a full sequin dress) "Sprawl II" and "Power Out," the latter of which they slowly, but powerfully blended into "Rebellion (Lies)." My friend, Tyler, later quipped: "That transition from "Power Out" to "Rebellion" was worth the price of admission."

And at $65 a head, the Island's grass was packed, but not completely sold-out. But an audience that big for a band that isn't Michael Bublé - although both alt-rockers The Sadies and first-time-in-Canada funk-cum-hip-hop goddess, Janelle Monáe were both solid in their own right, let's be honest, the crowd was there for Arcade Fire - was still an impressive feat for, dare I say, Canada's best contemporary band. 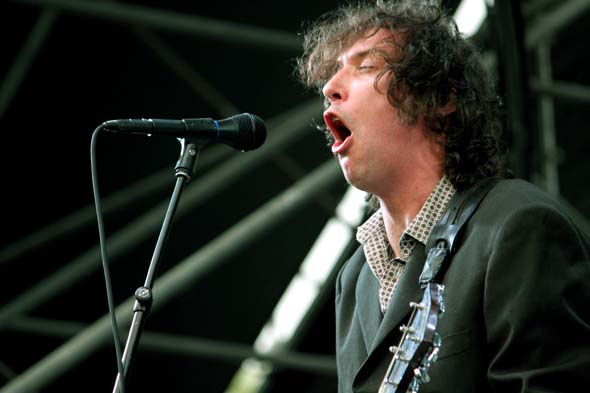 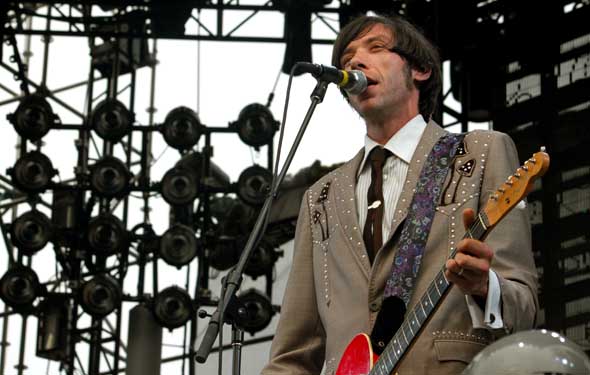 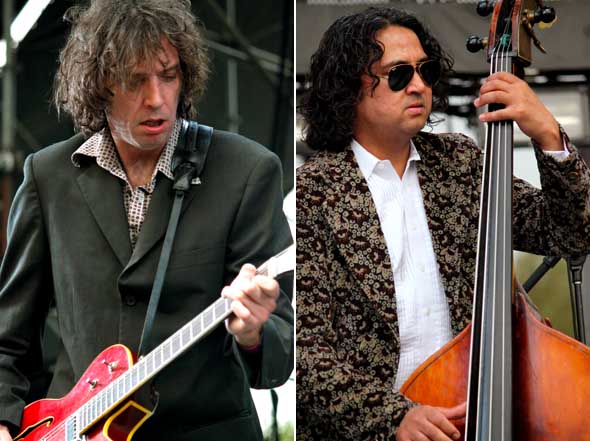 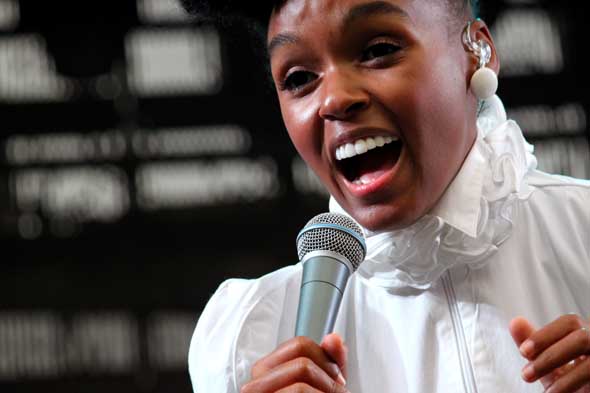 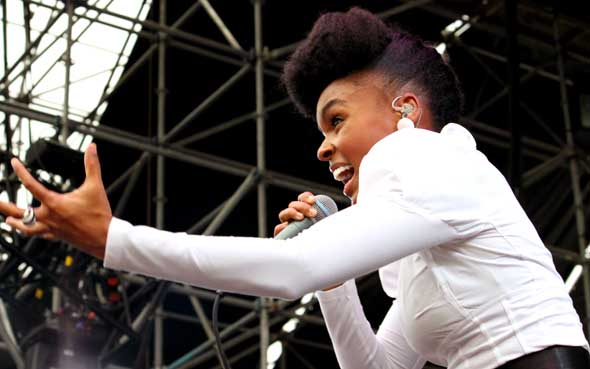 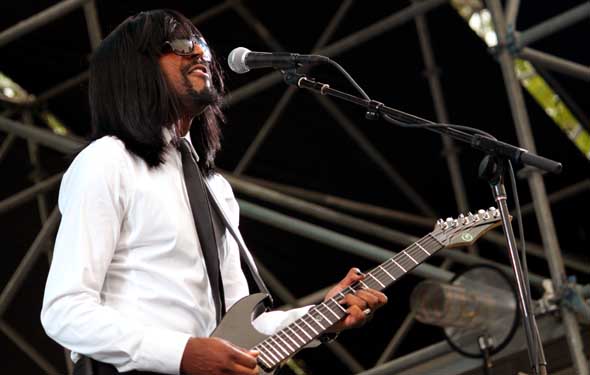 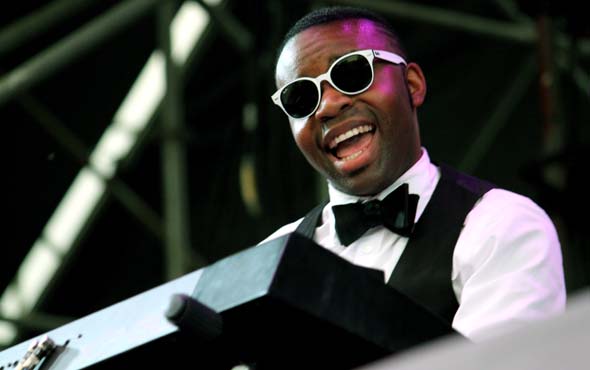 And with people, well, everywhere as soon as Arcade Fire hit the stage, the beer drinkers took to perching on the area's picnic tables. Something the security was able to impede until the octet transitioned into "Rebellion (Lies)." It was then that the security gave up.

Giant frontman Win Butler (he dwarfed Jon Stewart on the band's appearance last week) was well-composed, but didn't interact with the audience much. When he did, though, he meant it. After wrapping up "Haiti," he announced that $1 from each ticket was going to the Haiti relief charity, Kanpe. The band has promised a $1 million donation, if the public can match it. "This is where Canadians can come together for Haiti," Butler said to thunderous applause, which added touch to the emotional pull of the concert. 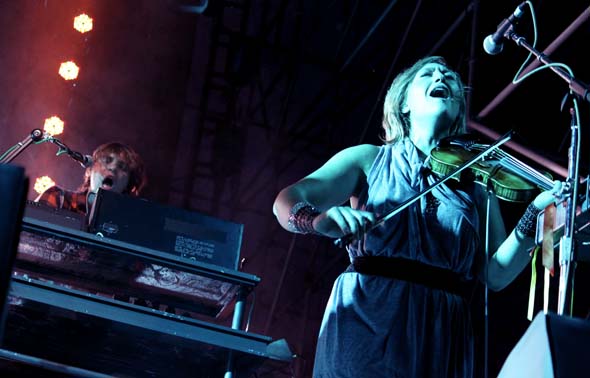 In the end, the wait for the ferry back to mainland matched the band's hour-and-a-half set. (I wasn't willing to duck out early, missing the encore. "Wake Up" with a crowd that size is something to experience.) But for a homegrown Canadian sensation like Arcade Fire, I'd be willing to do it again. Because as Butler said before the two-song encore: "The first show people lined up to see us was here in Toronto. Thank you."

Check out their setlist below:

Writing by Ryan Bolton. Photos and video by Matthew McAndrew.