Minus The Bear show off their groove at The Mod Club

Minus the Bear headlined The Mod Club on Sunday night, celebrating American Independence Day with a fervent Canadian audience. The Seattle quintet brought along some of their own strobe lights, adding to the venue's already stunning high-key lighting to make for a truly surreal concert experience.

The band are midway through their summer tour in support of their fourth full-length album OMNI, which was produced by Grammy winner Joe Chiccarelli and released by Dangerbird Records in early May.

In addition to shooting the show, I caught up with guitarist Dave Knudson (formerly of Botch) over the phone from his home in Seattle a few weeks ago, while he was enjoying a three week break from touring. We chatted about Minus the Bear's previous and upcoming Toronto shows, some of the music that influenced their new album and the dancey new video for "My Time." 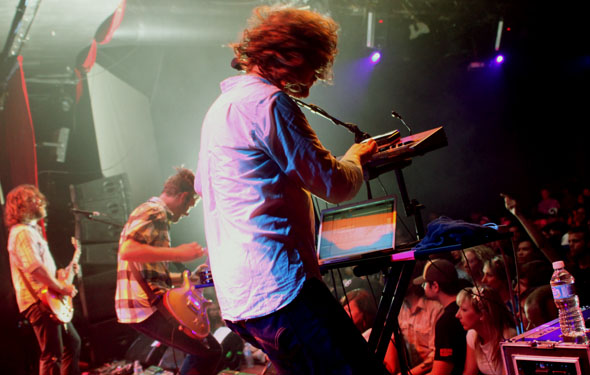 How many times have you played Toronto before?

I played a few times actually. Probably 4 or 5 I would imagine. The first time I played where was it? Was it at the place that The Rolling Stones played? Years and years ago, the very tiny one - The El Mocambo. We've probably played there 4 or 5 times, something like that. Yeah - definitely looking forward to coming back. The 4th of July is our Independence Day and we'll be in Canada celebrating it with all you. It'll be awesome!

So this time around you'll be playing the Mod Club in support of OMNI, which was recorded with producer Joe Chiccarelli. This was a big move for Minus the Bear - how do you feel with the result?

Great! I mean Joe definitely brought a bunch of stuff to the table that we hadn't experienced before. You know all the other albums have pretty much been produced by Matt Bayles - he was the original keyboard player with us. We definitely wanted to go into this record with a person with a fresh set of ears. It's not that we don't love what Matt does - all of the work that he's done for us we all think is fantastic, but it just seemed like after being in the band for eight or nine years, working with someone else might be a good change. So we went through a lot of [Joe's] discography and a lot of his works. It was great to have him come in and not know any of our work, not to have any preconceived ideas or notations that someone might have in terms of performance or playing and instead just kind of get in there and kick our butts a little bit and help us come up with a really good record. 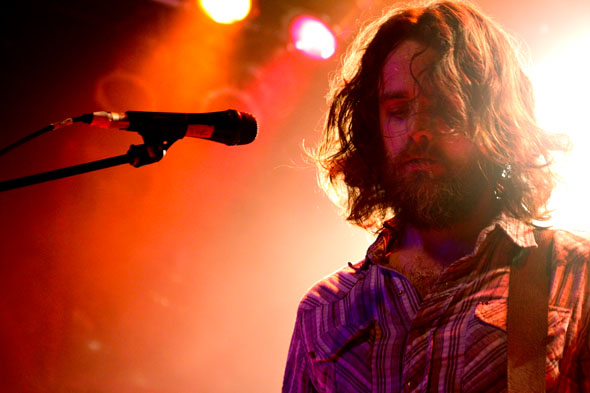 Yeah definitely, and that's something I think we're very self conscious about. It was such a fun record to record and it's awesome to play live and everything, but we wanted to get back to a little bit more of the dancey vibe that the band had a little more of in our earlier stuff. So yeah you're definitely you're right on saying there's a little more of a soulful vibe, a little bit more of a lot more of a groove oriented record than we've ever done in the past before. I personally was into a lot of 70's r&b and funk stuff that's kind of influenced all of us, Jake [Snider] was into Steely Dan and Donavan and Alex [Rose] and Erin [Tate], you know they bring hip hop and r&b sensibilities to it. So there are a lot of different influences in this record.

Your new video for "My Time" has become quite the hit on youtube? How did the idea for a dance video come about?

The idea came about just a couple weeks before we filmed it actually - we were at the office and we were talking about the video and shit and we were like 'let's get a bunch of dancers' and all of a sudden we just kind of went from having zero ideas to finding this dancer that we randomly sat next to on a plane who agreed to be in our video. The director and editor were fantastic. You know, I don't actually know how many hours of editing you know it took to put together all those crazy dance sequences or whatever.

So what can we expect to hear at The Mod Club on July 4?

The new stuff is going really well and it's super fun to play, but there will obviously a good mixture of old stuff too.

Minus the Bear delivered exactly that on Sunday night, mixing newer tracks like "Into the Mirror," and "The Thief" with classics like "Pachuca Sunrise" and "Drilling" from 2005's Menos El Oso and "Fine + 2 Pts" from their 2004 EP They Make Beer Commercials Like This. 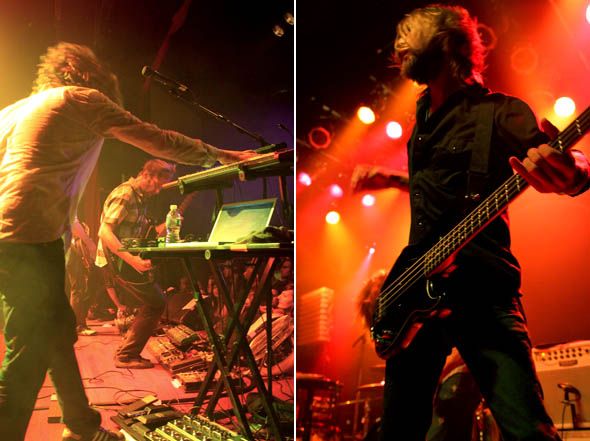 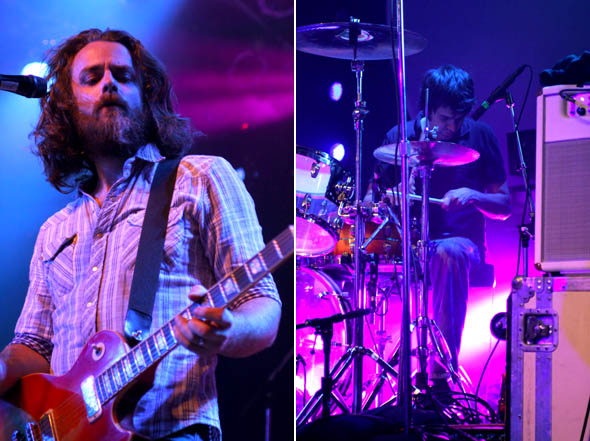 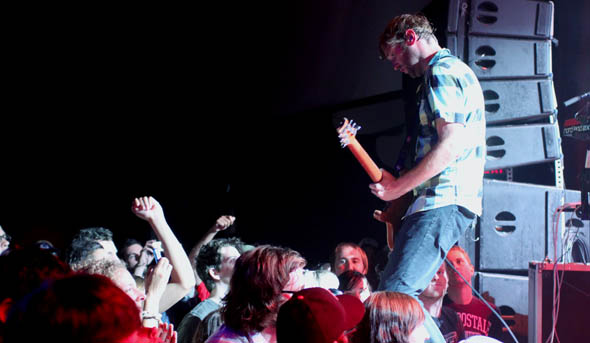 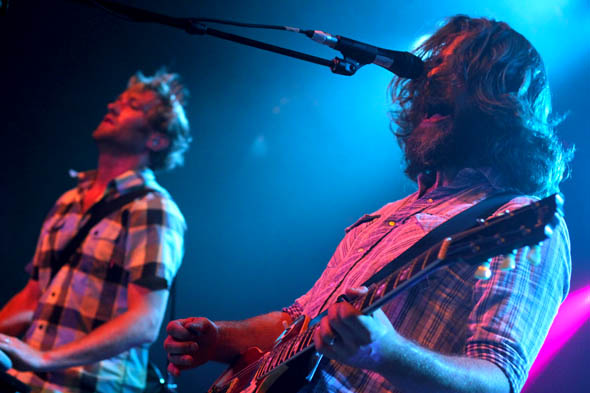 Both individually and as a whole, Minus the Bear performed with astounding technical proficiency, rolling through an eighteen song set in ninety minutes. While the Toronto crowd weren't really up for dancing, many were singing along with every word that came out of the mouth of vocalist Jake Snider. 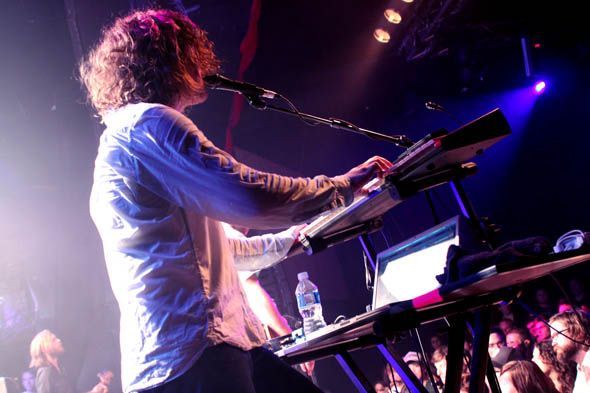 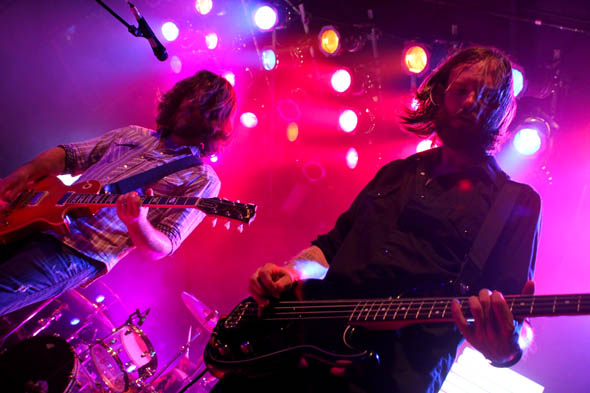 Though the band may be self-conscious of the direction they took on their new LP, it's evident that the majority of the fans (myself included) appreciate their ambition and their continued experimentation. With both the album and their live show they've managed to preserve their math rock roots while embracing everything from electro, funk, R&B and hip hop. 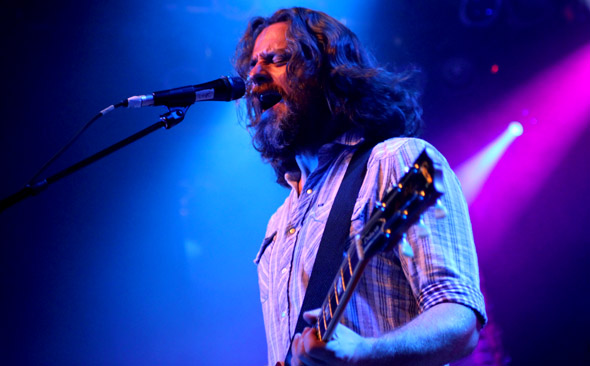 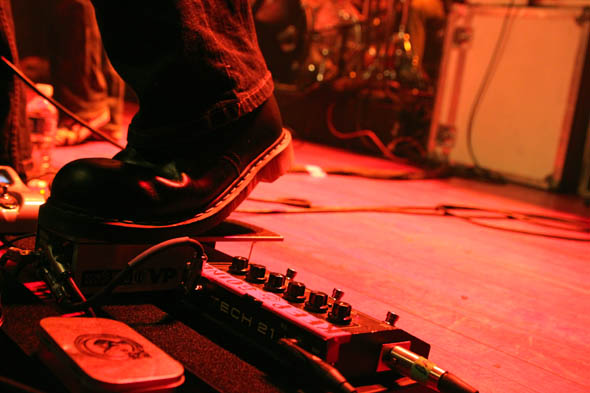 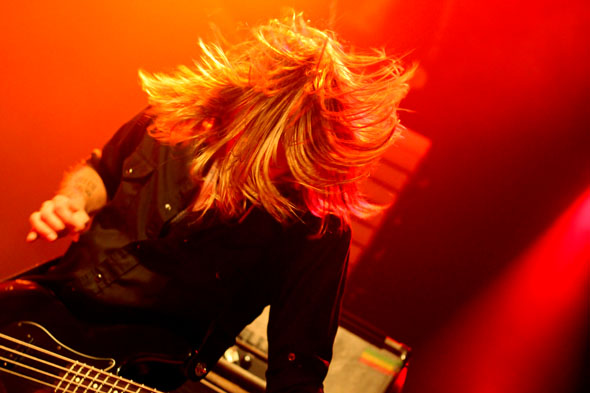 Photos and writing by Matthew McAndrew.