I will contain my utter hatred for Yonge/Dundas Square as a venue, because I hate repeating myself and I've already vented to many other people about its shortcomings. Suffice to say, it's really terrible . Maybe this is just because I was jealous I wasn't one of those lucky 100 people who got to dance with Iggy on stage because crack smoking (literally, it was crack) gutter punks forced me out of my spot.

Anyway, obviously Iggy and the Stooges ruled, basically the whole damn city was there. And the Raveonettes as well, they both sounded fantastic, and I remain confident that it would have been a great overall show had I have been able to actually see it. If it was a decade ago I would have felt required to brave that psychotic crowd and get as close to the stage as possible, but these days I'm content with a hot dog and a good curb sit.

Apart from that I resisted the urge to chop my legs off (thighs of steel I got, ladies and gents, I kid ya not) and biked all over hell's half acres (thanks for the bygone saying mom) to catch 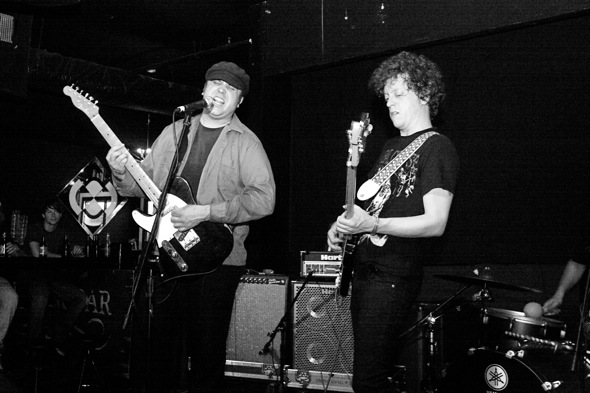 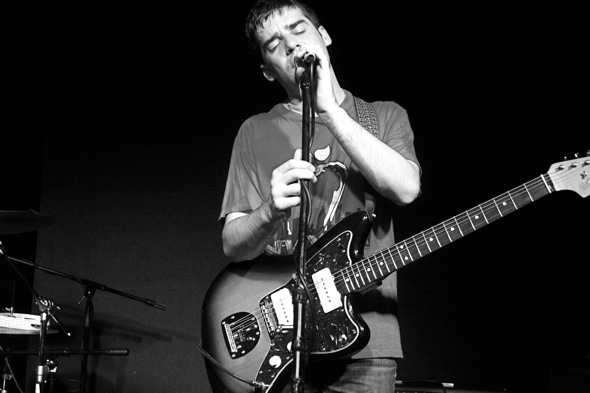 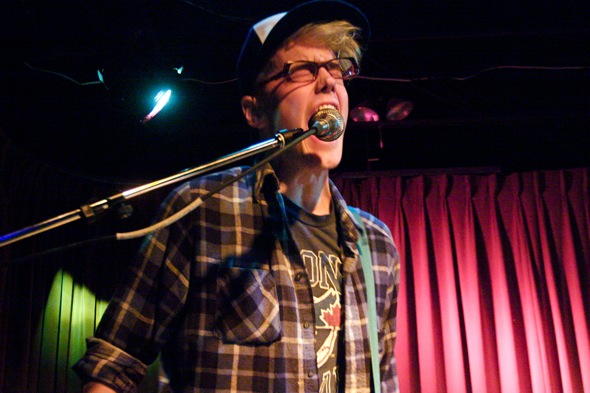 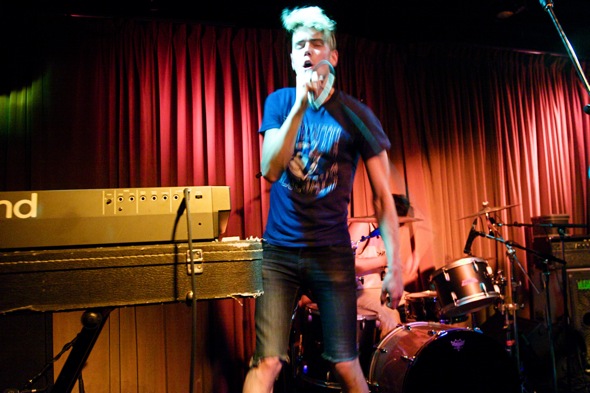 , my tied-with-Teen Anger favourite band in the city 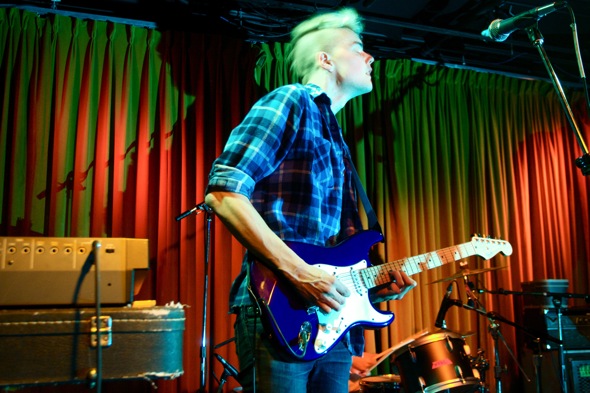 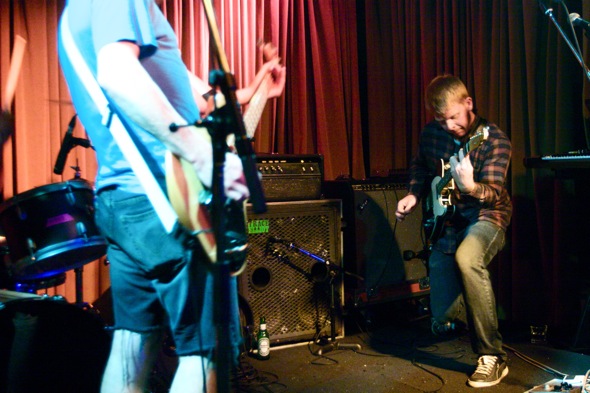 at the Drake, The noble and mighty Quintron at 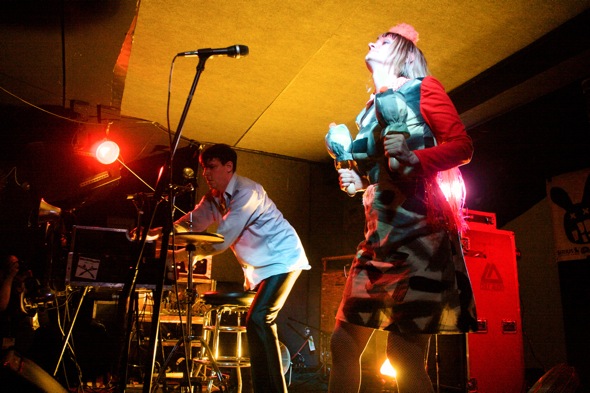 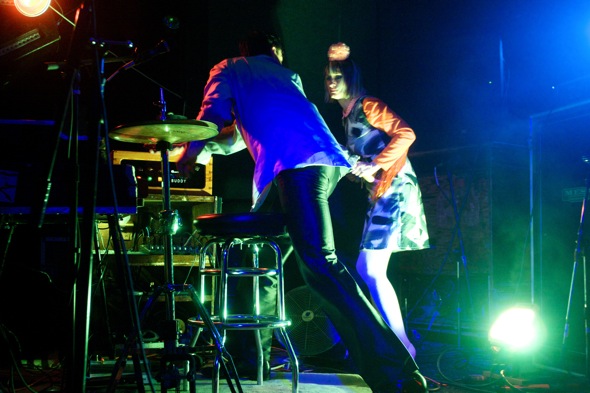 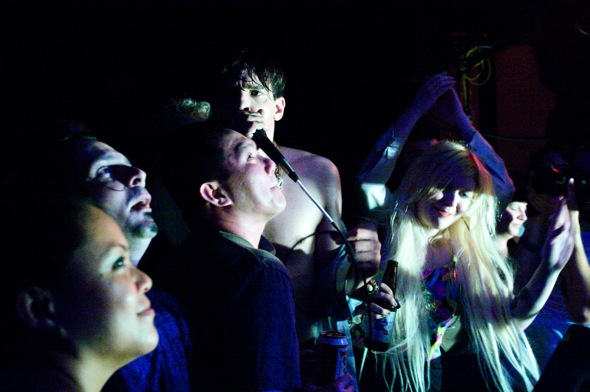 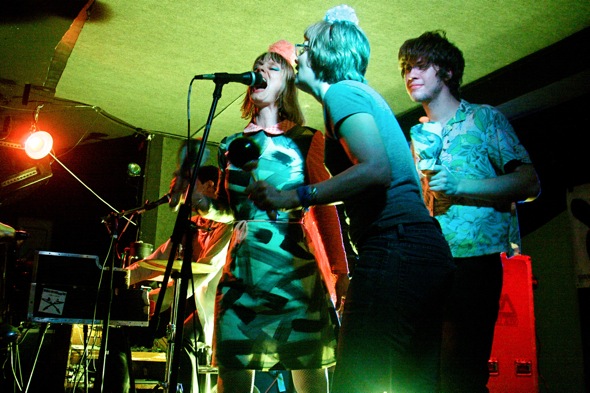 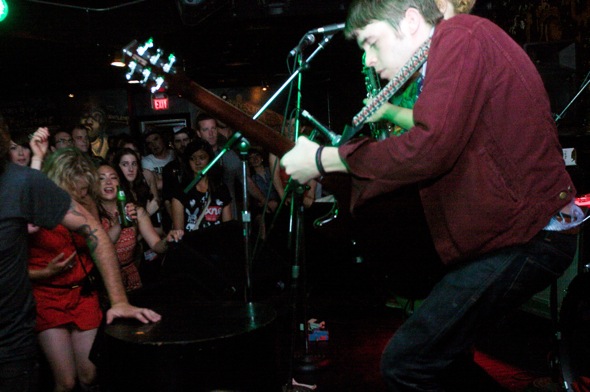 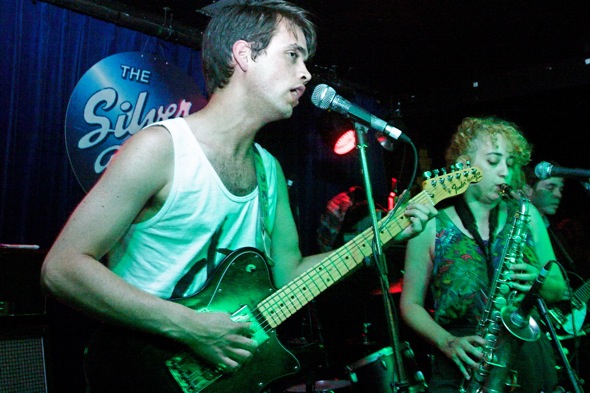 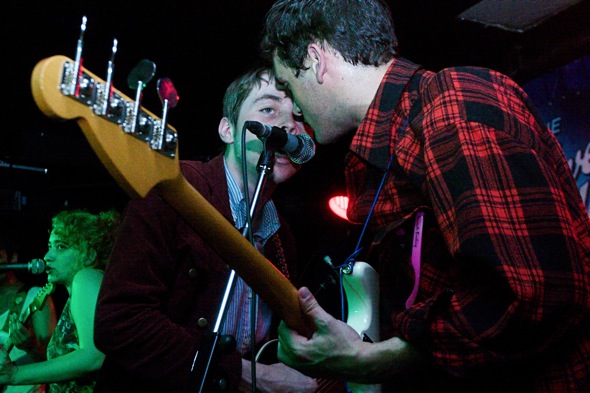 I'm sure I've seen Chicago's Mannequin Men before, they very well may have been one of the bands I walked in on at SXSW this year. They're a really current version of bluesy garage, but they don't sound at all silly. They're really high energy and they look and feel like they absolutely love the grit and grime that comes along with touring non stop. When speaking to them after the show, they commented on how nice and friendly everyone in Toronto is. Being a tourist must be awesome. 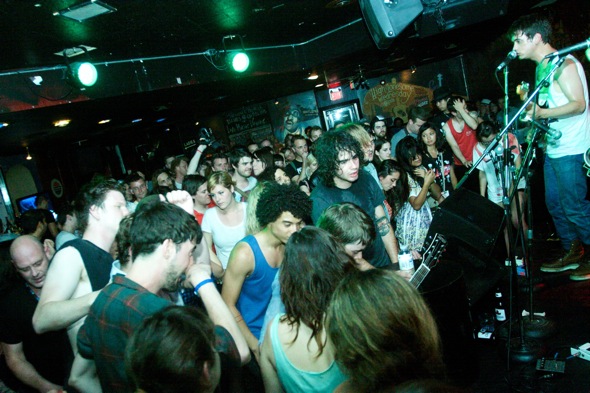 NXNE team members were handing out promo copies of a split the band did with Jack Oblivian ( of the Oblivians, a seminal garage punk band from the 90's). Even though Jack's song on the 7" is the better track, I still really like Mannequin Men's contribution Sally.I was going to try and book it to my local hero's Teen Anger's show at the Silver Dollar, but knowing that I would have to bike all the way back to the southern Little Portugal area to see Quintron at 1am made my choice to see Toronto/ Oshawa's The D'Urbervilles (who are for all intents and purposes on par in my books with Teen Anger) that much easier.I've written in the past about how much I enjoy the D'Urbers, and very very little could change that now. Maybe if they decided to go an all free jazz and marimba route it would, but even then I think the insane power John O has over the crowd would still make it worthwhile.The band was selling $2 t shirts at the show, and in my procrastination I missed that boat. They looked rad though, good stuff to whomever did get one. And also, sorry to the dude selling all the bands merch, I didn't mean to brush off your bands wares, I was just sore about the shirts. $2 band shirts are a big deal, people!The D'Urbers sounded fantastic last night. They're mixing in new songs with old tracks off the album We Are the Hunters, and they even played Shout It Out, from their demo! That happens to be my favourite song of theirs, and it elicited an only modestly contained dance freak out on my part. Tim Bruton has this incredible solo in one of the new songs (Junk Pile), that is just explosive and demonic. It's super fuzzy and delicious... like a fuzzy peach. I can't wait for the new album.The mighty mighty Quintron came next. Mr Quintron is a German born, Alabama raised god who has invented and patented no less than three musical instruments. How many recording artists can say that? He preforms with a custom built Hammond Organ and Fender Rhodes organ, his invention the Drum Buddy,a hi-hat, and a couple different effects. pedals He also has the organs built into a car fender, with a license plate that says "Mr.Q".His wife and counterpart, Miss Pussycat joins him onstage to belt out choruses and shake her Louisiana booty along to the music. Last night she was wearing a polyester dress with full sleeves, a collar, and streamers coming from the arms. I don't know how she didn't pass out, as pretty much everyone in the venue was drenched with sweat 2 songs in. Even Quintron stripped down to barely anything (and undid his pants) part way through.The best way I can describe Quintron's music is to say he sounds like a lounge singer (think a 1970's Engleburt Humberdink) on peyote. Never once does he sound sparse. It's dance music and it's soul punk at the same time. I haven't seen so many people shake their asses that hard in a long time. He may just be the best thing you've never heard of. I do implore each and everyone of you to check out 2009's Too Thirsty 4 Love.After leaving the Garrison covered in a thick layer of sweat- mine and many others, I cooled off on the bike ride over to the Silver Dollar to catch the 3rd night of the Strange Boys NXNE residency.The Strange Boys are like a less overt version of the Black Lips. More countrified, less party animal like. The saxophone player is a nice addition as well. By this point in the night I was barely able to hold myself up and my camera, let alone process and store memories of the show I was seeing. So I am sorry, I can remember very little of the show.I do recall a drunk guy grabbing a stool that was onstage and acting like a moron with it over his head, which caused promoter Mark Pesci to waver cautiously side stage for a spell. I remember really wishing I had seen the other two shows they played this weekend. People 'dancing' everywhere. Beer being thrown overhead at the band (is that ever cool?).They're a great band, they will easily be the best thing of the next few years. If you weren't at the 2am show last night, you should really check them out when they come back to Parts and Labor this September. You should probably do that anyways.

Great night, great NXNE, great distances covered on my bike. My favourites were: Thee Oh Sees, Man Or Astro-Man, and Quintron. Let's hope the NXNE staff keep the good times a-rollin' and make next years festival even better than this years.

For more photos check out me out, here.