Spacesuits and one epic BBQ at NXNE

Some of the best parts of any festival are the day shows, in my opinion. At least the 100+ people at 159 Manning thought so as well. I was in dire need of taking it easy after the vicious crawl of an early morning hangover that leaked its way into my body while I slept (on my floor). Taking it easy, that is, before the Friday night NXNE festivities took reign. 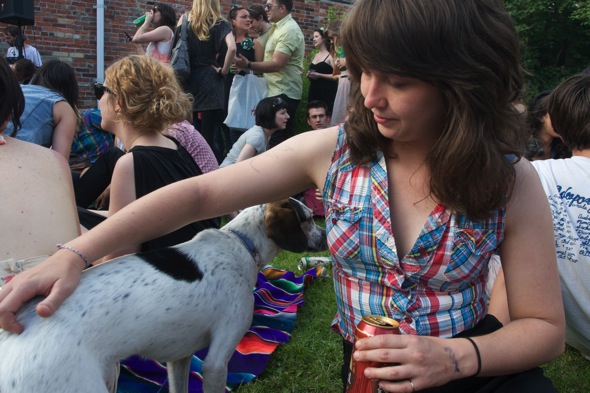 What started off as a delightful afternoon with a core group of enthusiastic BBQers, replete with adorable dogs, slowly but surely turned into a giant house party, there was barely room to light a cigarette, let alone utilize any of the blankets people were once lounging on. Tim McCready has made his annual NXNE BBQ into a spectacle. 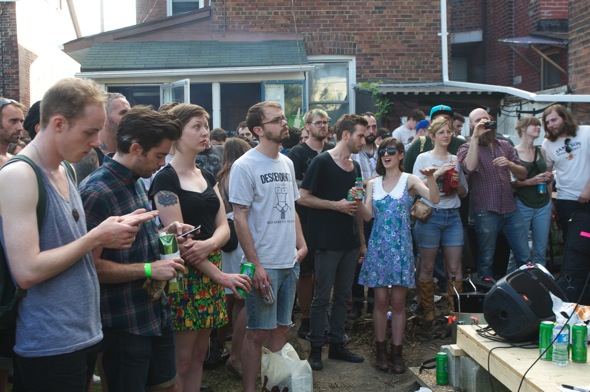 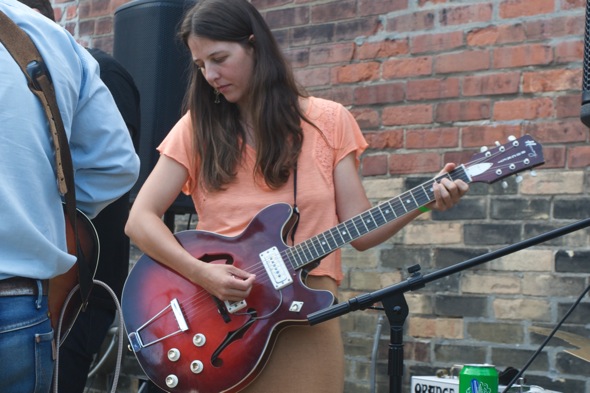 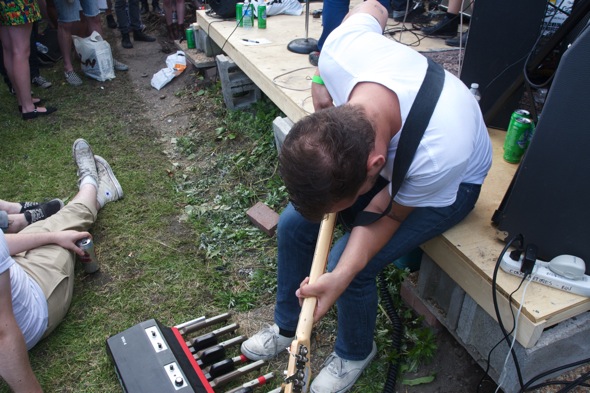 , a super group that includes members of Castlemusic, One hundred Dollars, and the Constantines went on just after I arrived. They sounded very much like a 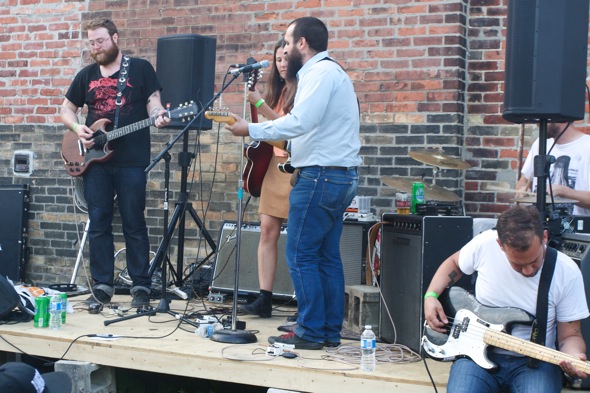 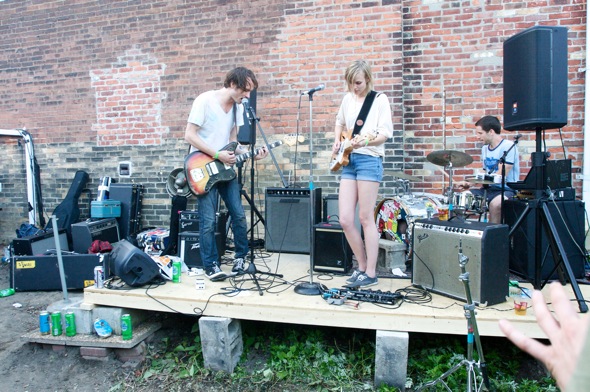 band, and mixing the elements of all 3 bands into one twangy, soulful reverie. One person even commented on how every time she saw them they brought her to tears. She wasn't crying though, but she looked about one whiskey sour away from it. 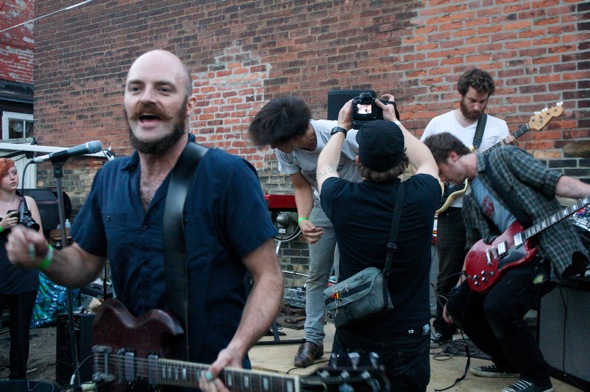 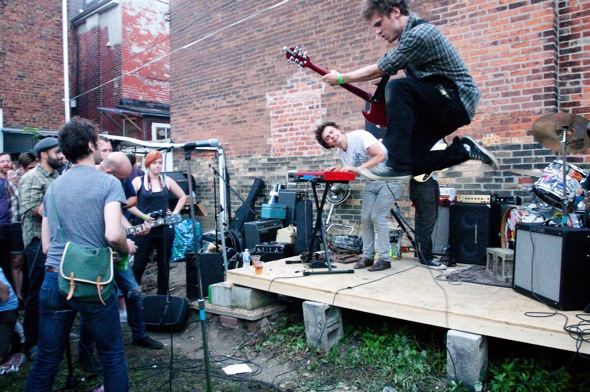 , Brian Borcherdt ( of Holy Fuck) and Anna Edwards ( of Foxfire) side projects played after Deloro, and though it wasn't the introspective country that everyone was revved up to hear more of, it was lovely. Simple and engaging, they're less heart wrenching than Brian's solo records but no less lovely. Moody slide guitar and hollow sounding drums catch and release Brian's falsetto. 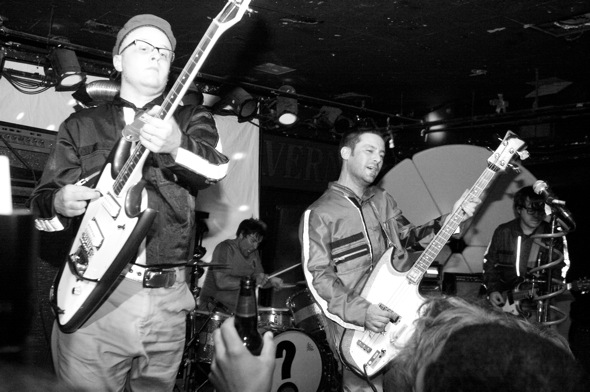 After everyone was comfortably in their own personal daydreams from the last 2 bands, 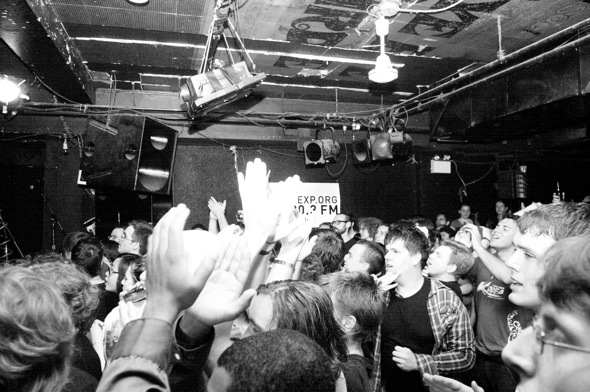 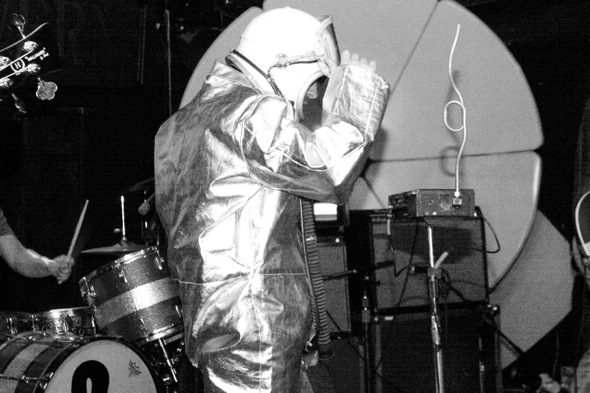 came on to pummel the melodic fairyland back into the collective subconscious. What can be said about Mohawk Lodge? They had as much energy as C'Mon, AC/DC, and The Darkness put together; various members did spinning jumps of the stage, and they captivated pretty much the whole crowd ( some out of genuine interest I'm sure, and some quite obviously out of sheer amazement). 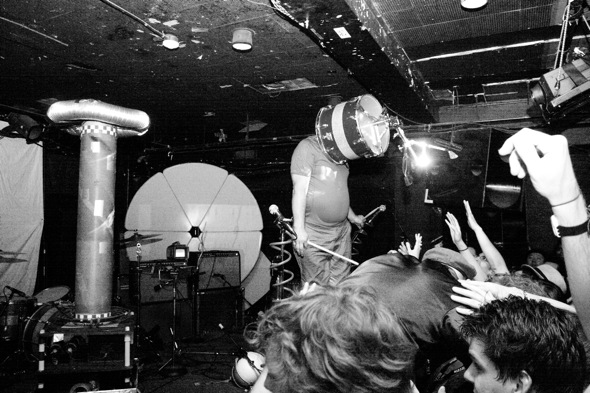 Though I stayed at the BBQ for several more hours, by that point it was a fool's errand to try to accomplish anything other than the ever present need for more beer, another burger, and a 'borrowed' smoke. Good stuff, Tim, good stuff. 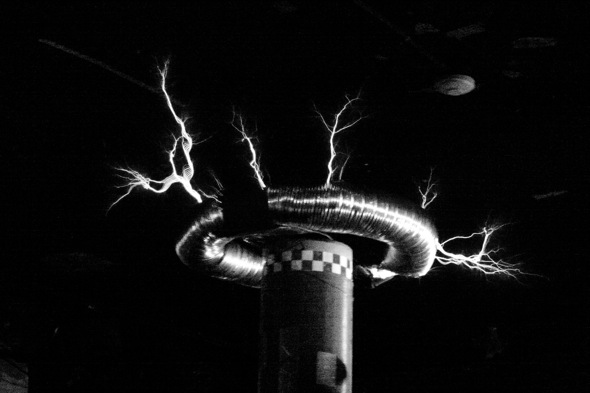 Man Or Astro-Man was 2nd on my list of must sees for the festival (the first being Thee Oh Sees, and the 3rd being Iggy and The Stooges). Legends in their own right, and hailing all the way from Grid Sector 23B6-1 (by way of Alabama), Man Or Astro-Man was the most theatrical band to come out of the 90's. That is, of course, taking into account that the Backstreet Boys were not perceived as theatrical in the moment; hindsight though may say differently.They dress in mock spacesuits, sample archaic 60's sci-fi films, use a theremin AND a Tesla coil, and mash it all together with incredibly fun surf rock. If aliens really do listen to music, I'd be disappointed if it was space-classic and not space-surf.They haven't played in about 4 years, and haven't been to Toronto in a decade, so this was a pretty special show for those dedicated fans. And they came out in droves. There's something about the Horseshoe that makes it seem 10 times smaller than it actually is when it's filled to capacity. It was insanely busy in there, and not just with grunge kids patiently waiting out the set for their overlords Mudhoney to come on.For my money, it all comes down to the song '9 Volt'. It's not that it's so vastly different than the other songs, but it's one of the few that actually have vocals in them. But the line " Don't kiss me again with your 9 volt tongue" makes me so happy I can barely contain it. The fact that they're a mostly instrumental band doesn't hinder them at all, not in the way that most people perceive it would ( See Do Make Say Think), instead it lets them fully freak out and get right into the whole campy spectacle of the show.

And the Tesla coil! How great is that? They cleared the front row away from the stage and brought out the beast, a giant modern coil that erupted in a purple flash and sent lightning beaming across the ceiling. 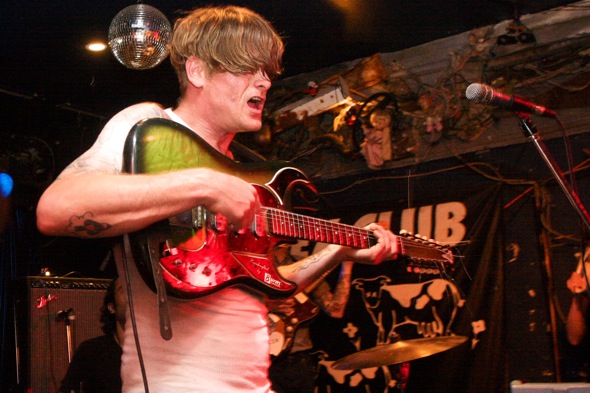 Also last night, much to my satisfaction, was a secret 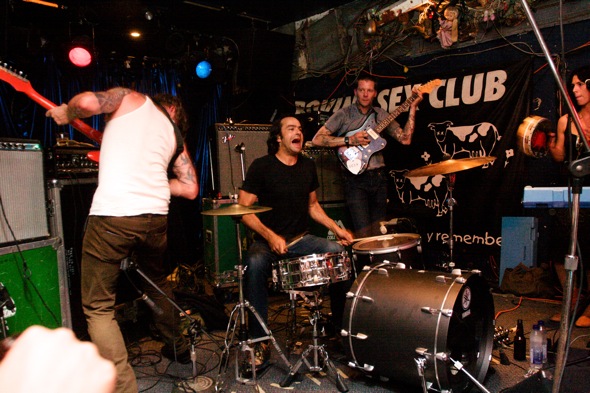 Oh Sees show at the Bovine. If you don't know about them by now, read any review (be it mine or others) and listen to "Destroyed Fortress Reappears", "Adult Acid" and "Dead Energy". For as many fuzzed out psych albums they put out, they have also put out as many acoustic albums. And those are equally as important, they showcase the breadth of the band. John Dwyer is a musical genius. With almost as many releases last year as there are months, he lives in an entirely musical world.I was kept running up until the last minute trying to find out where exactly they were playing, but managed to get to the Bovine with enough time to wait in line for the first song and bypass a girl who's heel broke at exactly the right moment. There aren't words strong enough to convey how I feel about them.

Anyways, that was my Friday night at NXNE, and though I didn't hit up all the wicked awesome and probably well worth it shows that I could have, I still had a ton of fun with a lot of friends and saw a Tesla coil in action.