When is Finch station a Caribbean paradise? It's possible to suspend disbelief when TTC busker Dwight Belgrove is performing.

The steel drum player winked his thanks as I stood and watched him play earlier this week. I would later discover that the unmistakable sounds of a performing pannist can be enough to make one really feel warm inside. Perhaps warm enough, in one instance, for a commuter to leave his winter coat in Dwight's instrument case, in place of tips.

Tell me a bit about yourself. Who is Dwight Belgrove?

I'm a steel drum musician. When I'm not busking, I teach steel drum at St. James Town Youth Centre. I've been playing for practically my whole life. I make the instruments, I tune them, I read and write music, and I compose for a steel orchestra.

How did you start playing the steel drum?

I'm from Trinidad; I've been in Canada off and on from 1992. My dad and some of the guys in the area where I was from formed a band around the time I was born. I've always been around the instrument, I naturally liked it, and I've just always been playing it. It's always been there.

What type of steel drum do you play?

I play a soprano, as it's more popularly known here in Canada, but traditionally it's called a tenor pan. 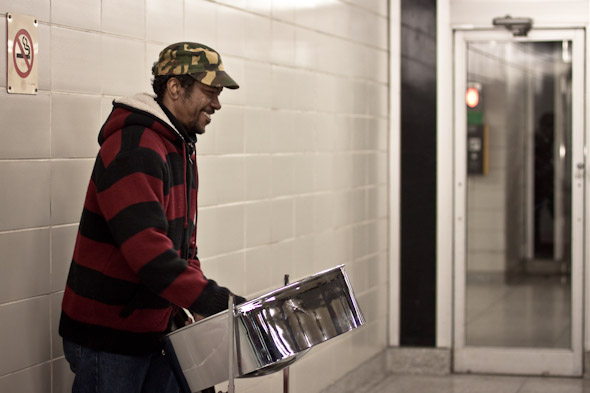 Some of my musical influences are from Trinidad, but I was also influenced by people like Michael Jackson and Stevie Wonder.

What is your musical genre?

I play a little bit of everything. A lot of calypso, jazz, reggae, pop, R&B, and folk.

Why did you get into TTC busking?

As a musician it gives me the freedom to do what I like to do on my terms. There's a spot for me to play every day. It just works for me.

Do you perform anywhere else besides the TTC?

I am part of a four-piece band and we play around Toronto off and on. We're all working, so when we can get together, we come together and we just play.

I have one CD I recorded when I was part of a four-piece band working on a cruise ship, in 1993 or so. I have that for sale when I'm busking in the subway.

What are the most important elements of busking, for you?

Lots of kids who have been playing in school will come up to me and they will want to show me they can play. Even beginners who have never played before will want to try it. They might have heard a band while on a Caribbean vacation, so it brings back fun memories for them. A lot of people come up to me with those types of stories.

A guy took his coat off and dropped it into my pan case, in winter. I was playing at Main St. station and a guy was passing through. He checked his pockets, said, "Oh, I don't have anything!" So he took off his coat and dropped it in, and before I could say anything, he left.

In the end, I took the coat home, but I couldn't keep it because it was too big for me. I took it to the Salvation Army.

Watch Dwight play The Girl From Ipanema, Pan in the 21st Century, and Portrait of Trinidad below.