It's hard enough to miss Toronto street drummer Snooky Tynes when he performs solo at the Yonge and Dundas intersection, befitted as he often is in a fuzzy hat and bespectacled in star-shaped shades. But it's something else entirely when he makes his busking a family affair. The 51-year-old father of four fronts the Tynes, a 60's and 70's funk tribute band in which Snooky's kids are his backup musicians.

The Tynes have already made waves on Breakfast Television and CBC Radio, but every so often, they'll just show up at Yonge-Dundas Square, set up their equipment, and draw a crowd in what seems like no time at all. I watched them play one of these nearly-impromptu mini-concerts -- a show so tight and polished, I nearly forgot that they were buskers.

They will sing, dance, and even throw in the occasional karate pose. The Tynes are a family of natural entertainers, and I'm sure they'll raise the bar on everything you expected from Toronto's street music.

So, Snooky, tell me a bit about yourself and your family band. Who are you, and who are the Tynes?

I'm the lead singer and percussionist. I've always had bands, ever since the 70s. I'm inspired by groups like the Jackson Five and James Brown. I decided to jump into music with two feet because it seemed like a nice way to escape some of the things going on in my life as a kid.

In the Tynes family band, my twin girls Akwete and Akwokwo, both 17, play bass and guitar respectively. My son Kizza, 15, plays drums. My daughter Attallah, 14, plays keyboards. Their mother Odessa is their supporter. She videotapes the shows and helps with their outfits. 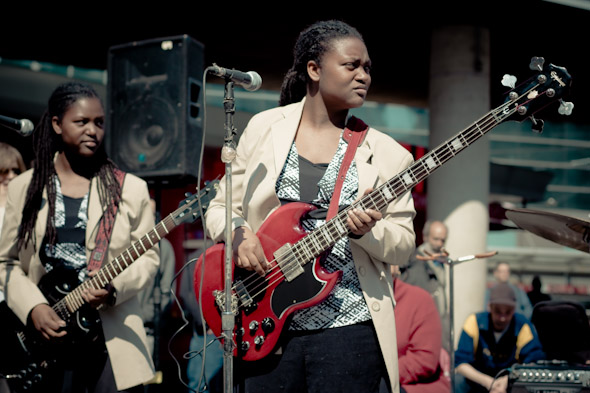 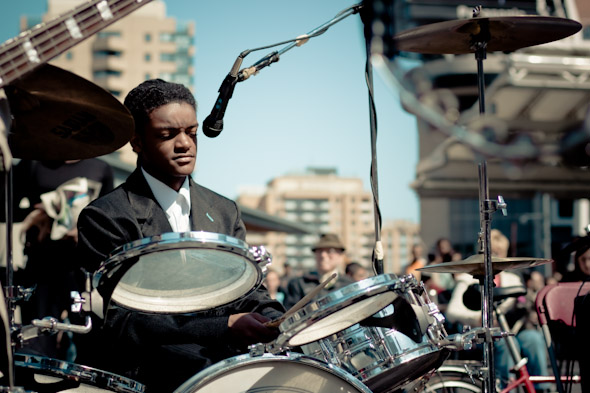 What's the inspiration for the way you dress?

Funk is about colours. It's psychedelic. The hats and sunglasses I sometimes wear represent that freedom.

You mentioned that you've held a lot of jobs. What are some of them?

My main job is being a musician -- I was born to do this, to be a funk drummer. But I also work in the Cabbagetown Community Arts Centre, teach karate part-time, and I do light deliveries part-time. In the past, I've taught dance lessons, driven trucks for a Canadian medical gas company, done MIG welding, and many other things. 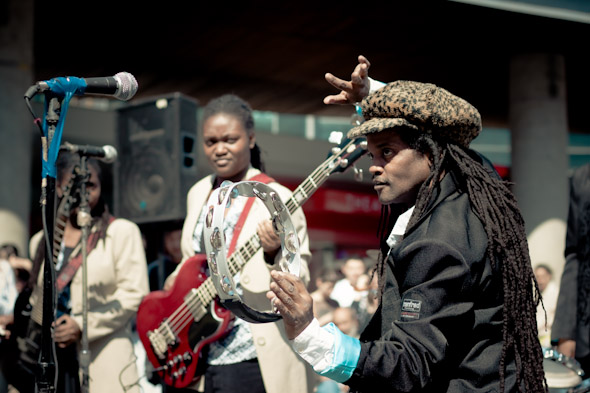 How long have you been drumming? How did you get into it?

Since I was 4 or 5, and I'm 51 now. My brother snuck a band into the house one day when my mother went out. All of the equipment looked gigantic to me, and I remember walking up to the drums and trying to play them. That's how it started, but my love for music was there before that.

My mother really inspired me in that regard. She used to love to sing on the weekends, and she would get my siblings and me on the floor, and we would sing and dance with her. 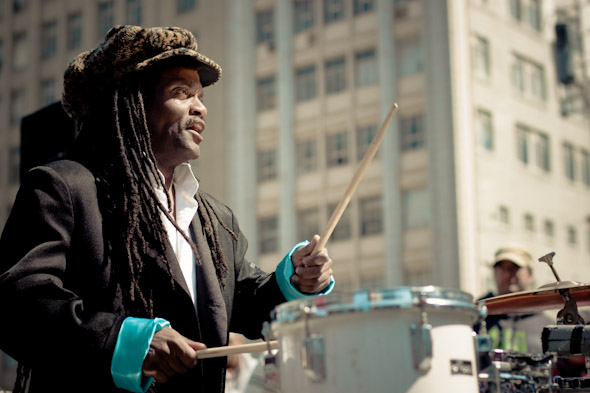 What got you into street busking?

The money, actually. I got into it by watching street buskers pretty much my whole life. I started busking at Yonge and Eglinton 15 years ago and I've been at it ever since. Right now, I just do Yonge and Dundas about three times a week.

How often does your entire family busk with you?

Maybe once or twice a month. This is our fourth year at Yonge and Dundas. The family band has been together since the twins were about 9. We play nightclubs, and we've been on Breakfast Television three times. When we busk as a family, we always have the entire equipment setup. 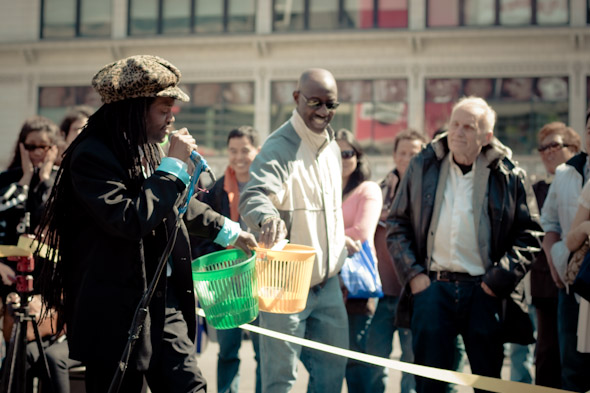 No, but we have a DVD out, and people can get one of those by emailing me at snookytynes@gmail.com.

What's the best part about street busking? The worst?

The best part is seeing people smiling and dancing. And it's definitely one of the best things in the world to work and be so happy to do what you do.

The worst part is when artists don't get the respect they deserve because they're playing on the streets. I believe in hard work, not handouts, and that's what I tell my kids, too. 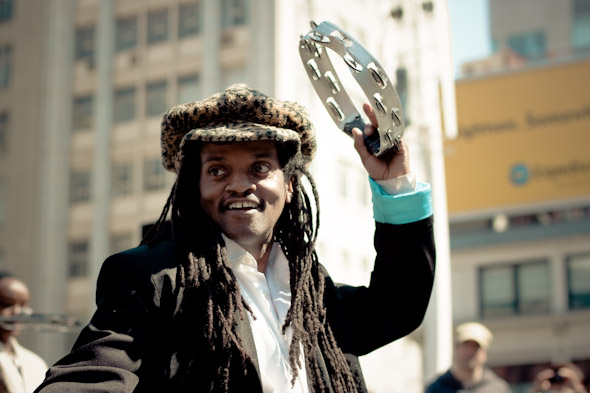 People have stolen from me. I've had people bend down and take money out of the bucket, put it in their pocket, and walk away. Or they'll kick your bucket as hard as they can, and your money will splatter all over the place. Isn't that horrible? That's horrible.

What's the most interesting thing you've had dropped into your bucket while busking?

One day, somebody put in a great big picture of a happy face, and they told me how awesome I was and how I'd made their day. That was really nice.

Watch the Tynes play Flash Light by Parliament, Working Day and Night by Michael Jackson, and I Want You Back by the Jackson Five below.