New York's Woods played at the Horseshoe last night as part of the Canadian Music Festival.

I was highly anticipating this, seeing as I missed the last show Woods played here a few months back. To give you an idea of how I feel about this band, I compare their live show to what a guy walking for days in the desert must think of finding a bottle of water. This is pretty similar to how I felt when I first saw them one hot and hungover day in Texas last year. Woods was the one band I was really excited to see out of the CMF lineup, and for good reason. 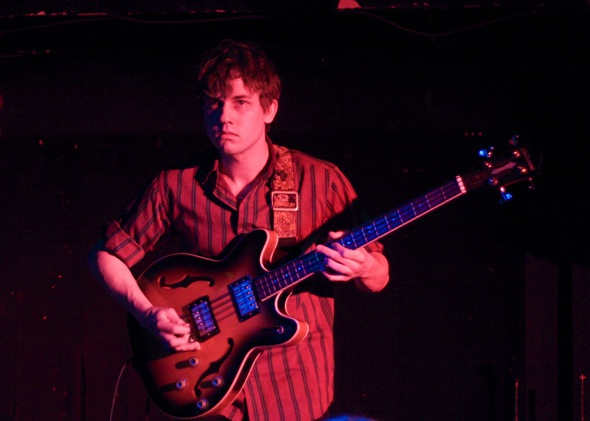 First of all, they're one of the best psychedelic bands around right now, along with San Francisco's Thee Oh Sees and Vermont's MV & EE . They sound like an American Os Mutantes (an influential Brazilian psych band from the 1960s), but with a modern sense of songwriting and timing. 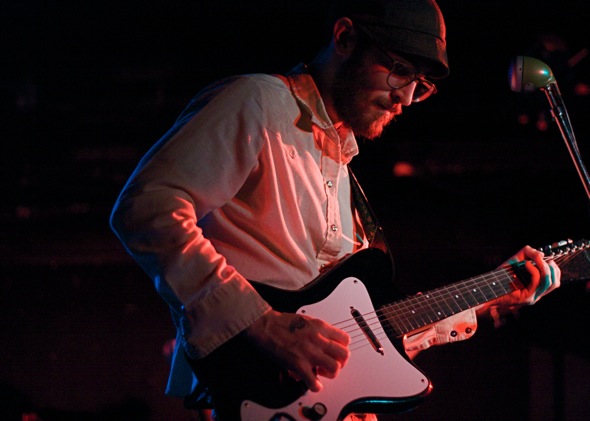 Secondly, as a band they create this other-worldly atmosphere that sucks you in and takes you somewhere close to a black hole. Jeremy Earl, the lead singer, has this unfaltering nostalgic sound to his voice and it just meshes so well with the rest of the band's sound. It's like, and follow me on this, if Neil young was a 20-something year old kid from New York City. 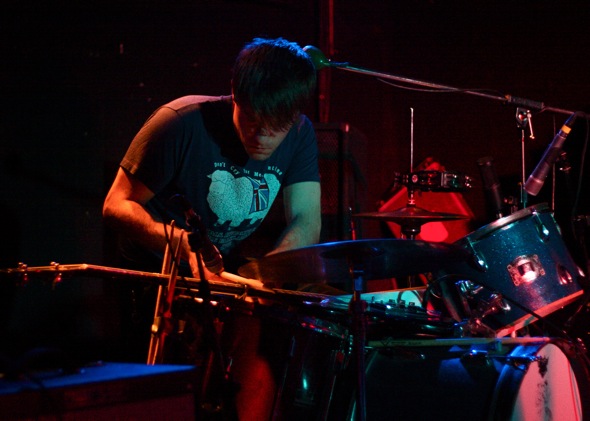 Third, they switch up instruments. That's an instant deal maker for me. The bass player is an awesome drummer and vice versa - always entertaining with a band that knows how to do it right. 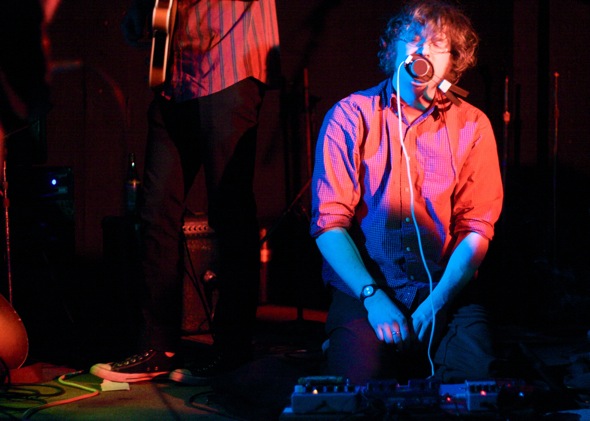 The show last night at the Horseshoe was completely rammed with people; I'm not quite used to the CMF's 8 p.m. door time, so I keep showing up when it's already packed. But hey, that's a testament to how well received they are. I pissed off a few people by trying to get to the front, and not wanting to start the night off on a bad trip, I found my way around it without getting some rather cold looks. 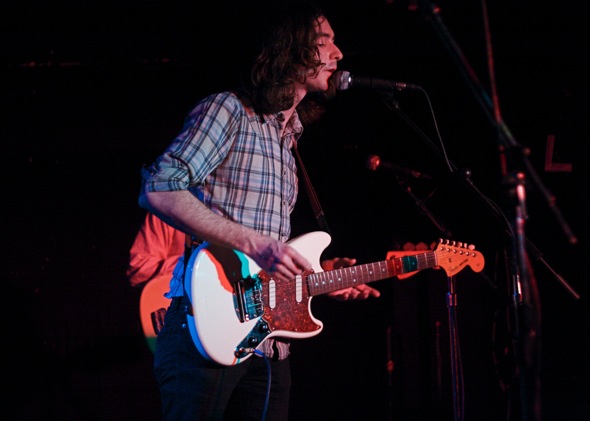 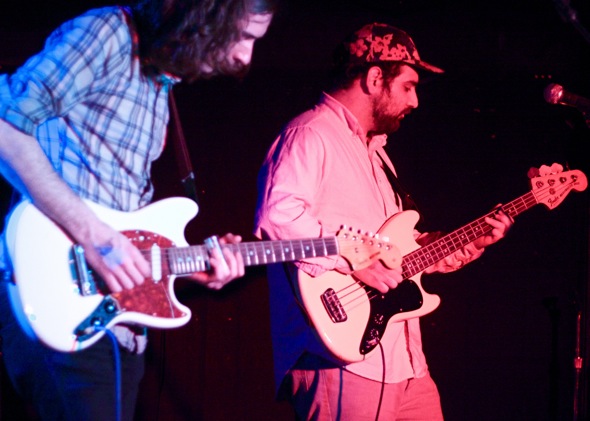 Also playing last night were Woodsist label mates and tour buddies Real Estate, a band that takes the whole psych lo-fi resurgence of late and runs to the hills with it. They sounded really good and I liked quite a few of their songs. They were really tight and quite spacey. It could be just the nature of the lo-fi genre, which can sometimes lead to repetitiveness, but I did hear some dissent about the band. Maybe people were just super pumped for Woods. Either way, I thought that they put on a pretty good show.

Woods were fantastic. There's so much to look at when they play. I mean, to start, you have a guy singing into a mic that's attached to his face while frantically, yet methodically, twiddling with various effects pedals and cassette tape loops. You add in the fervent dedication of Kevin Morby's bass playing and you're well on your way to great heights.

They played a lot of stuff off their newest album, 2009's Songs of Shame, and a ton of the goodies that they've released on various formats in extremely limited edition. 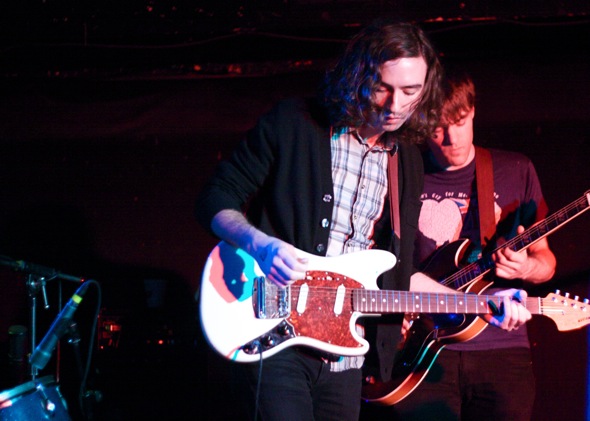 Both bands came out onstage for the encore, and played the greatest cover of Blind Melon's "No Rain" known to mankind. In a totally legitimate way, I really liked the cover. Seeing both bands come back onstage for an encore, I had no idea what to expect... so really, it exceeded my expectations. The show as a whole though, turned my expectations into a demented 4th dimension which, if one did exist, I am sure Woods' music would be part of the atmosphere. 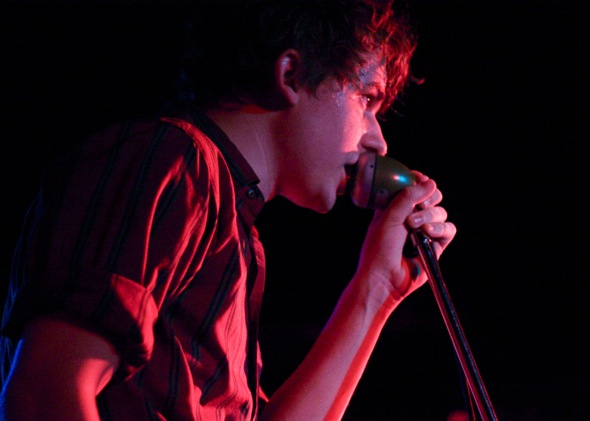 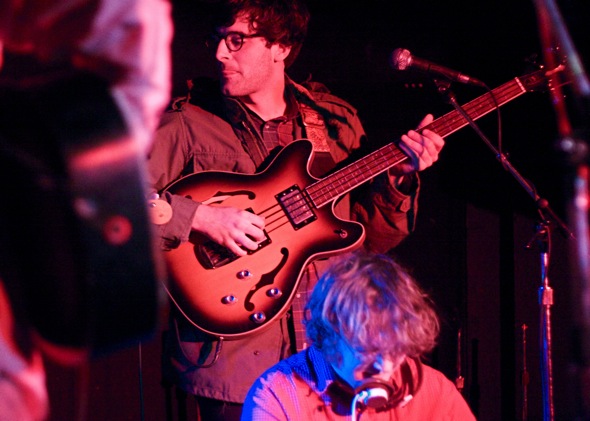 As I write this, I just realized that it's 4 a.m. This is the third night in a row that I'll have gotten less than five hours sleep. I am tired and trying to think of the best way to sum the show up. It made me happy to be around so many other people thoroughly enjoying the same thing. Especially when those eager fans completely fail at keeping a member of Real Estate afloat when he went to stage dive. Dude had to try three times! 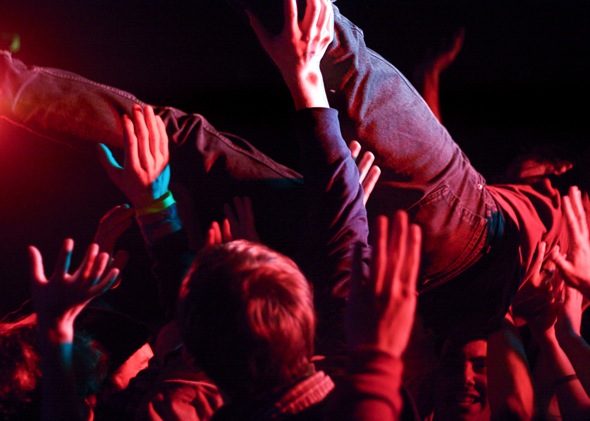 They make me smile when I'm taking photos, and they can totally create some great moods. I would highly recommend picking up Songs of Shame and At Rear House he next time you head to your neighborhood record store.

To see more photos from this show, visit my photo blog