Self-taught guitarist Mike Green loved Led Zeppelin as a kid growing up in Saint John, New Brunswick, and he'll still occasionally break out one of their songs as a TTC busker. I watched Mike perform at Union station as a stream of commuters poured and separated around us, like a river passing around rocks. Everyone was headed somewhere.

The constant flow of people was in stark contrast to the story he would tell me about his most amazing experience as a busker. Sometimes, according to Mike, it only takes one girl and a bit of music to bring a whole station to a standstill.

Tell me a bit about yourself. Who is Mike Green?

I was actually raised in Saint John, New Brunswick, and moved here when I was 18. I was a structural iron worker for years. You know, the guys who go up tall buildings on frames?

Now I'm a subway musician. I'm doing what I really like doing. Live life for the moment, because that's really all there is.

How long have you been a TTC busker? How did you get into it?

This is my seventh year. I think I was at Yorkdale and I'd just gotten laid off from the iron. I stopped to see a busker play and was like, "Wow, that's kind of interesting." I talked to him and he told me about the TTC program. I just went to myself, "I'll give it a shot." You try these things out, and you end up doing them. And music has always been a big part of my life.

I've been playing for 27 years, and I'm self-taught. I'm 50. I didn't start until I was 23 years old. But when I was a kid, Led Zeppelin was my favourite band, and I was always air guitaring Jimmy Page. I bought an electric guitar when I was around 16 and it drove everybody crazy, so that didn't really work out at first. It can be annoying when you don't know how to play.

Primarily blues for sure, but I like rock music. I like heavy metal too. Well, there's not really any music I won't listen to. But I'd say more than half the time, I'm playing blues.

What songs do you usually cover?

I do a lot of Stevie Ray Vaughan songs like Dirty Pool, Texas Flood, Pride and Joy. Every once in a while I'll break out a Metallica song like Nothing Else Matters or The Unforgiven. The odd time, too, I'll play some Zeppelin. 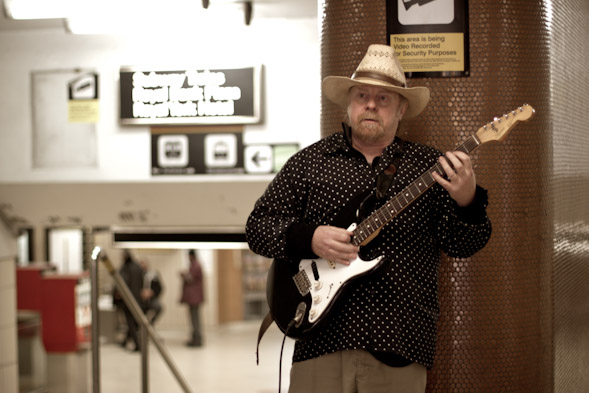 Do you have any original works?

I actually have quite a bit of original work. I'm just not very good with recording things. I had a friend come up from London two weekends ago and he did 12 songs for me, so I will be putting a CD out, hopefully within the next two or three weeks. I've got five original songs on it, and the rest are just covers.

How would people go about buying that CD?

They'd have to bump into me on the TTC. A lot of the guys in the system have a lot of experience selling them, but I don't. I guess it'll be a learning process over the next year. Initially I just plan on putting them in my case. I get asked maybe five times a week if I have a CD. I'd like to get some music out there, anyways.

Just the amount of people you meet, and the people who are truly interested in what you're doing. In the TTC, the vast majority of people don't pay attention to you. But every so often, you really connect with someone. It's a great to hear that you've made someone's day.

As for meeting other buskers, I'll say hi, I don't really jam with them that much, myself. But I'm sure you've met Leo and Mel. I've played with Leo a couple times.

What about the worst?

Sometimes the drunks on Friday night or Saturday. They can be aggressive.

The people who usually stop and talk to me range from mentally disturbed people to the nicest, most rational people you could ever talk to.

The most amazing time I ever had busking, I was at Bloor-Yonge. This woman came by and she had a young girl, about 6 years old at the time. I was playing a real boogie blues lead. The girl instantly just started dancing to it, and she could really dance.

It was about 4 p.m., so the station was quite busy. Within about five minutes, the whole platform had come to a standstill because they were all watching this little girl dance. She brought the whole station to a stop.

I actually had to stop playing because one of the rules TTC buskers have is we can't draw crowds. If it gets too crowded, especially at stations like Bloor-Yonge, there's a danger of someone getting pushed off the platform. But it was a totally amazing experience.

The other musicians have experienced this too. There's a guy who cuts up little paper toys, folds them, and puts them in your case. It'll be a little paper horse, or a bird, or sometimes it'll look like a Christmas decoration. I always thought that was kind of interesting. He never stops and talks.