Hailing from Stratford, Ontario, TTC busker and electric bassist Aiden Keeley describes himself as "kind of a funk-jazz guy." I bumped into him at Osgoode station and decided to watch him play as commuters threw change, bobbing their heads as they passed.

I find that many people don't focus on good bass in a song, although it's always heard and recognized as a musical backbone. What's special about Aiden and his busking is that he can take a bassline and isolate it in a setting like the TTC, drawing attention to what has always been familiar, but not always fully appreciated.

And, as evidenced by the below video -- boy, can the guy crank out a mean slap bass riff.

Tell me a bit about yourself. Who is Aiden Keeley?

Aiden Keeley is a musician. I was actually born in Toronto, and I grew up in Stratford. Both of my parents are artists -- my mom's a pianist and my dad's an actor. They both worked at the Stratford Festival, so I think that probably helped with my artistic growth.

How long have you been playing the bass?

I've been playing bass for about three years now, but I've played piano since I was a kid. I'm self-taught on the bass, but when I was a kid I had some piano lessons. I've always been interested in music.

How long have you been a TTC busker? How did you get into it?

I only got my license this year, so I've been busking since October. I'd heard that you can make pretty decent money at it. I just thought it'd be a great opportunity to get a job, and I wanted to move to the city.

Where do you usually busk?

I've been going to Ossington station quite a lot lately. Usually there's no one there, so I'll just set up camp. But I went there a couple days ago and there were somebody busking there, so it's kind of hard to gauge whether or not I'll be somewhere. Sometimes I'm at Osgoode and Yorkdale, too. 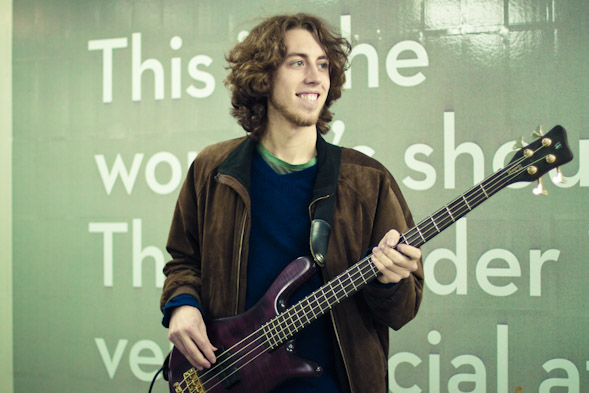 Do you know of any other bassists on the TTC?

No, actually. A lot of the time I get people coming up to me saying that I'm the first bassist they've seen. It's nice because I think I'm giving people something that they're not used to hearing. Most of the time, it's an acoustic guitar player.

What kind of bass do you use?

It's a Warwick bass, German-made.

What's the best part about busking?

It's great to know that you've made someone's day. Also, it's like getting paid to practice. It's a great opportunity to play your stuff to people, and it's really fulfilling when you have people throwing you a lot of change.

You see some characters, for sure. I had this one woman come up to me, singing to herself. She stopped, looked me right in the eye, and asked if I liked rock and roll. I said, "Well, I'm kind of more of a funk-jazz guy." She told me that rock and roll was the music of Satan, and walked away.

So yeah, you get some crazies sometimes, but I've never felt threatened in the subway.

I've had people drop off religious pamphlets in my case, a Tim Hortons gift certificate...TTC tokens, too, which are great because I can use them. Buskers have to pay for their own transportation between stations. Sometimes you can just flash your license and they'll let you through, but technically you're supposed to pay, which I don't really agree with.

Watch Aiden play selections from his funk bass medley below.