The longest (and best) day you could imagine having at CMF

It was Friday around noon that I woke from a pleasant dream involving a live action game of Candyland. In the midst of the dream, I thought I was Queen Frostine. Anyways, my day was already off to a good start. I knew I wanted to keep the day rolling in exactly the same way. Well and good.

It all started to come to come together when a little bird whispered something in my ear about a day show going on at John O'Regan (you do know Diamond Rings, don't you?) and local filmmaker / man about town Colin Medly's apartment. It was the perfect start to my day, I thought, and what else was I going to do at 1 p.m.? Watch Simpsons reruns online?

When I opened the door to their place, it was filled with bustling ladies and gents drinking a beer (or gin and juice) that was masterfully being served up by the D'Urbervilles' Tim Bruton, or getting some delicious homemade snacks (the cookies were a nice addition to my Candyland theme) to fill their eager bellies. 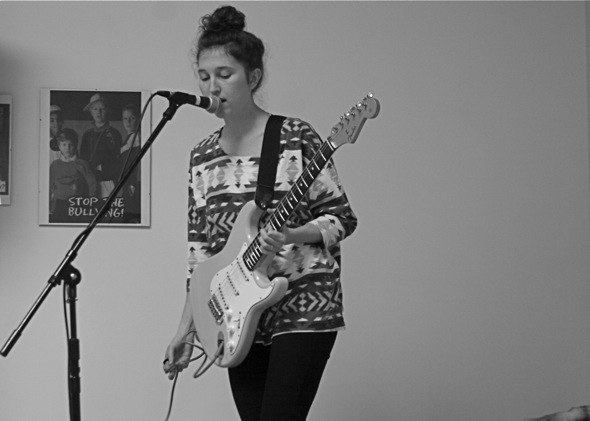 Emma McKenna went on first, with only an electric guitar and her lovely voice. She plays simple, heartfelt songs in a hauntingly passionate way. I love that she uses an electric guitar because it makes the music more piercing than if she played an acoustic. The focus is completely on her voice though. She sounds like something from a distant time, somewhere with a lot of wind and chilly mornings.

After a bit of mingling I noticed two masked ladies sitting patiently in the corner that served as a makeshift stage. These were the Ghost Bees, Halifax's spooky and surreal shoegaze folk combo. Incense was lit, bells were chimed ceremoniously, and children were drawing quietly in the crowd. They sound like something halfway between traditional folk music and an all acoustic movie score for a Wes Anderson film. I loved them. 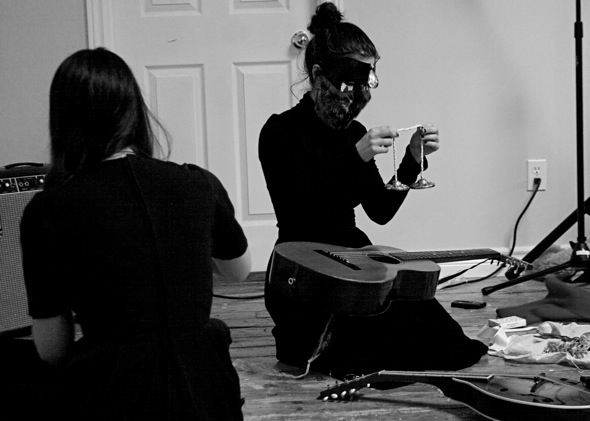 Their performance was spellbinding. They did a cover of one of Emma's songs as well (don't hate me for not knowing the name of it) , and while they were performing it Emma was singing along to a few lines. It was beautiful really; there was such a close connection between Sari and Romy that it drew everyone who was watching into their world. 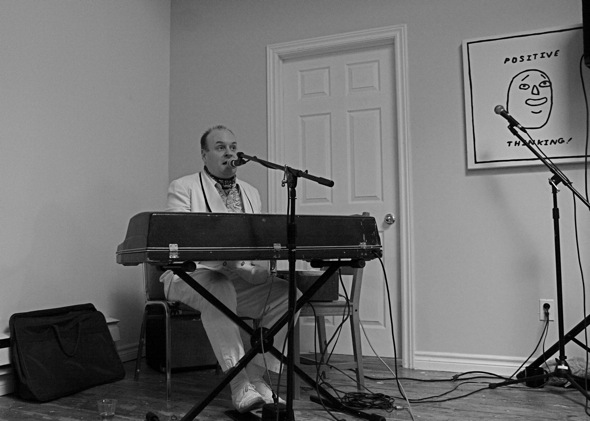 The last person to grace the afternoon party was the comical lounge artist, Mantler. I've only ever seen Mantler once before, at the Tranzac maybe, and I remember it being so loud and riotous that his subtle humour and witty songs were lost to the crowd. Playing with a seriously analog drum machine, a white tuxedo, and a sense of urgency, he brought smiles and laughs to everyone in the room. Childman, off his latest album Monody was by far my favourite song. His show was the best way to end a daytime house show that had lasted about six hours. 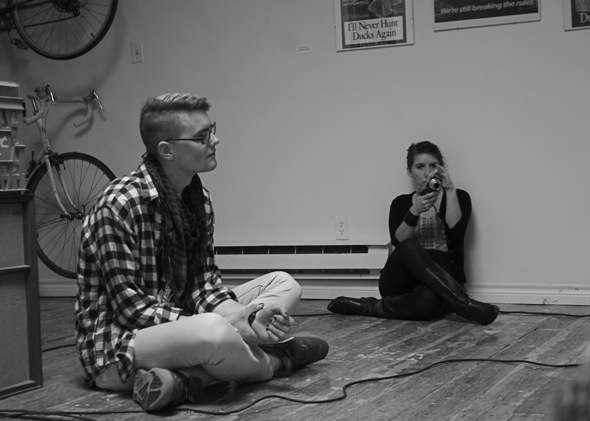 Thusly, The first portion my awesome day had come to an end. It was time to go home, relax for a minute or two and then head back out for the Metz / D'Urbervilles show at the Garrison. 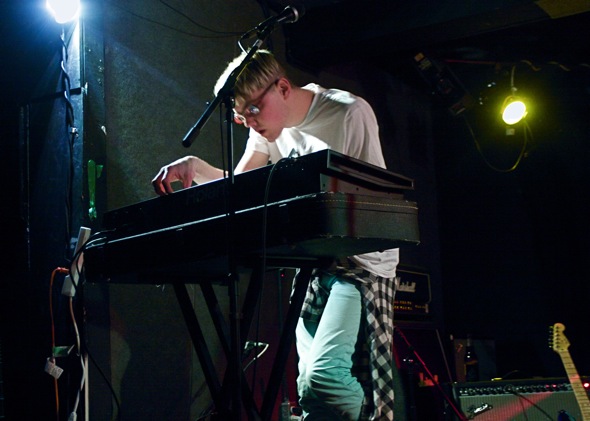 Now, I was extremely excited to see this show. It's no secret that the D'urbervilles and Metz are two of my favourite local bands. If you came to a proverbial fork in the Post-Punk road, you'd see an arrow pointing left for Metz and right for the D'Urbervilles, if you get my meaning. 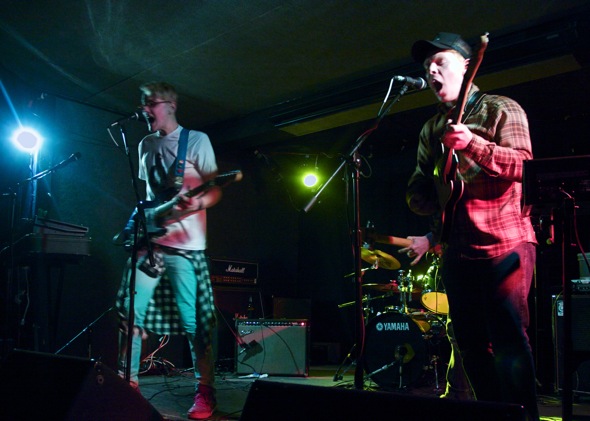 It's really fun to see John O in this band. He's obviously a hit as Diamond Rings, and probably will be for some time to come, but he's just a riot in this band. His quirky jagged dance moves and manic howl are enough to get anybody into the groove. They're jut so much fun to watch, let alone actually listen to. Tim Bruton's angular upper body dancing is a testament to how insistent the music is. If Spacemen 3 makes you roll your body around like a piece of well cooked spaghetti, then the D'Urbs are more like a crisp candy cane splintering into a thousand bits. 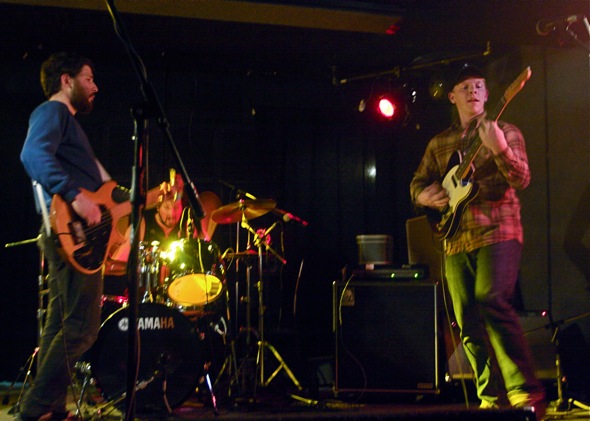 They played a ton of material off their album We Are The Hunters, but the most exciting part (to me at least, a seasoned fan) was when they closed the set off with a new song off their highly anticipated second album. It was called something like Trashcan, Trashtalk or Trashgirl... I have a terrible memory for this kind of thing. But it just blew me away. There's this crazy breakdown where all of a sudden Kyle Donnelly's bass explodes in a super distorted mass of noise and damn near stops your heart until the dancey rhythms of the guitars pummel you back to life.

They're just a really tight band and great songwriters. They make liking them easy. I really feel that with the new album, they'll be set for even greater heights. 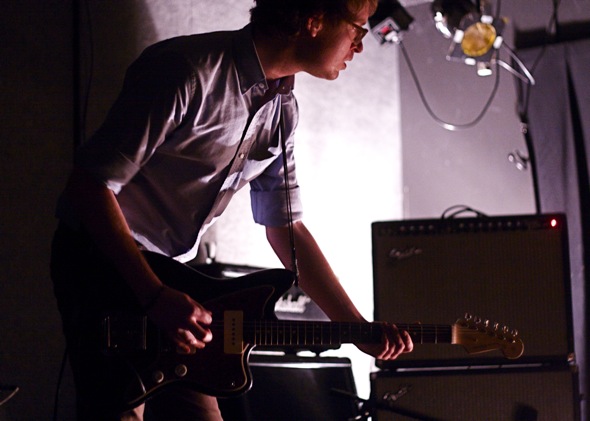 And then there was Metz. I think apart from 10,000 Watt Head and the late great Cursed, Metz might be the loudest band in Toronto. It's almost like you don't even hear the music -- instead you feel it on a more visceral level. It permeates your every cell and becomes a part of you.

The fact that the band plays in almost total darkness is exhilarating too. You'd think that would take more of the focus off them as performers and make you focus on the music, but it does the opposite really. It forces you pay attention to them, watching for Alex's crazed swagger and Chris's caged animal-like pace. Hayden sits barely behind his drum kit, and he creates such a whirlwind with his arms that it seems as if he's be preparing for lift off. 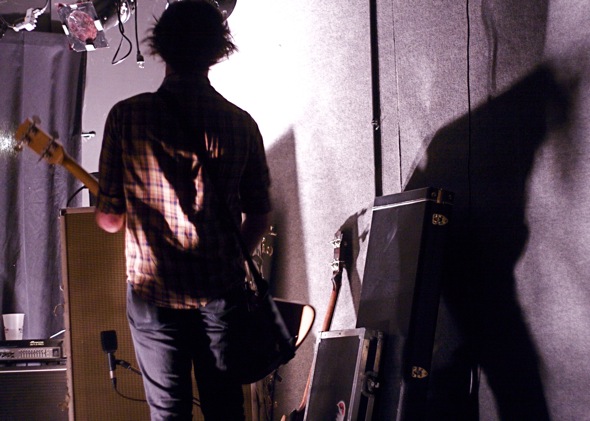 Partway through the show I came out of a sonic stupor just long enough to notice that I had received a text saying "If you do a review of this show you should say that no one worked as hard as Metz's amps did. Holy Fuck!" Thanks for the quote Tim! It's completely true though. The paint is literally peeling off of their amps, and while that may not actually be the result of how loud they are, I can't help but think that there's at least some small connection.

So far as I can tell, the band only has two 7" singles released. I really really hope that this is the year that we see a full length record from those guys. You'd have to take an afternoon off and prepare yourself for the first listen. You'd have to wear earplugs underneath your headphones. Okay, not really, but that's the scope of the band. They're big and loud, and they demand that you pay attention. Alex experiments with feedback while the band sets out to destroy you. 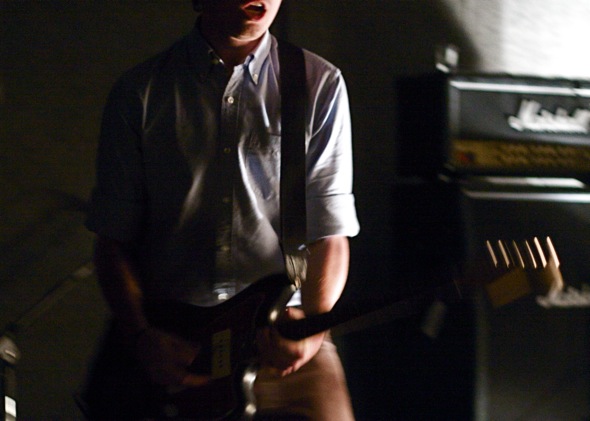 There were three other bands who played the EYE showcase last night. I ended up missing Ghostkeeper, who went on first, because I'm not used to these early show times. The other two bands, Silver Starling and Soft Copy, I really did not like. Silver Starling sounded like they picked up where Arcade Fire left off, and instead of continuing along that theme, they just rewound the tape and played over it. And Soft Copy, for all their indie darling-ness, kind of came off as being a bit contrived and honestly after Metz, they sounded poncey and lame.

Maybe this makes me a snob, but I just couldn't get into taking photos of those bands when I didn't like what they were doing. 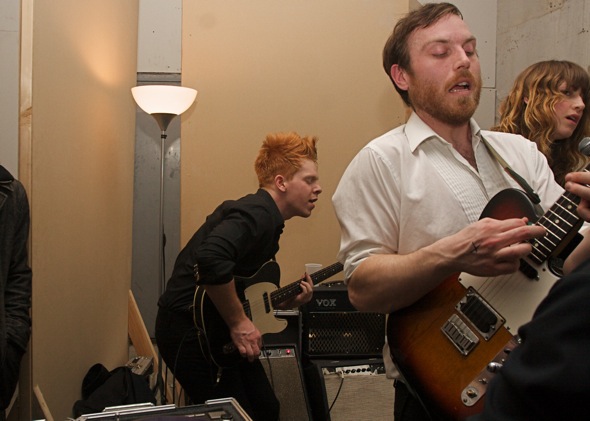 It was now last call, and my friend and I were trying to find the nearest bar that had one of those nifty extended licenses, but the best we could do was hustle over to the Painted Lady and bide our time until 3 a.m. rolled around. What was going on at 3 a.m.? Oh, just a little after party at some loft off the Ossington strip. The Magic and Bonjay were playing, with a DJ set by Ghramzilla (one half of what was Thunderhesit). 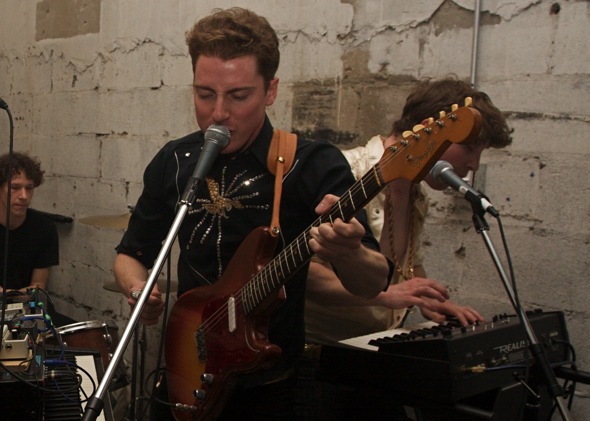 It was totally worth the wait. The Magic are pure energy, old school R n' B injected with a lethal dose of glam. They're probably the best band anyone could hope to see after a full night (and in my case, day) of drinking. Just when you need that second wind, the Magic appear out of thin air/ a wickedly packed loft to force a dance out of you. Geordie Gordon is a giant ball of energy, weather its crooning his heart out to a super funky synth beat or bringing it all back home with a guitar -- he keeps the action fast-paced and insistent.

It would have been amazing to see them in that setting with the horn section that usually backs them up, but I honestly don't see how one more person could have fit in the place, let alone a few dudes with brass instruments. 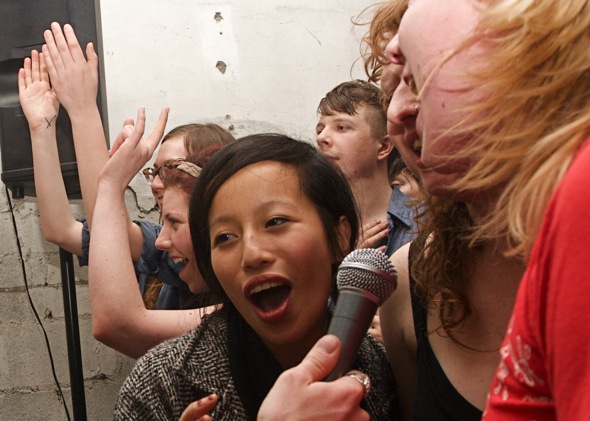 I wasn't able to stick around for Bonjay because I was starting to crash really fast, what with the crazy pace of the day. But I hear from the more hardcore than I that it was a wicked time.

I was cold, wet, and already nursing a hangover by the time I got back to my place at six in the morning. It was all worth it, though, because it turned out to be the best time I've had in a 24 hour span in a long time. My Candyland dream day was complete.

For more photos check out my photo blog.