Last night at the Annex Wreckroom the mighty Coalesce, Harvey Milk, Atlas Sound and our own home grown wonder kids Burning Love put on a heck of a show.

So I should start out honestly -- I'm not 100% behind CMW, or CMF, or whatever it's actually called. It's easy to criticize a Canadian-themed festival that consists largely of American bands, and features a headliner that is almost completely out of touch with current music (Our Lady Peace). But when it becomes hard to find nuggets of fun, it makes it somewhat more worthwhile, I think. This show at Annex Wreckroom was one such nugget.

Coalesce hasn't played Toronto in 10 years, which is just a few less years than it's been since I cared at all about Our Lady Peace (My younger sister gave me Clumsy on cassette tape for my birthday in 1997). They're a brutally intense band, along the same lines as an early Converge, Botch, and Dillenger Escape Plan. The thing that's really great about Coalesce, though, is that after a 16 year musical span, they still bring something new and interesting to the table. 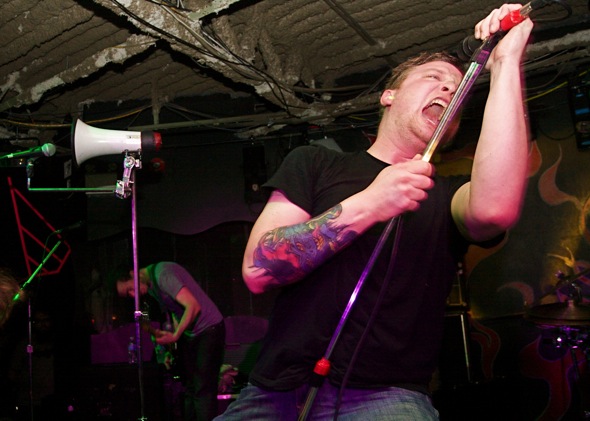 Looking back at the material off Give Them Rope, the bands first studio album, they sound like a band who is at the forefront of a genre; defining it with each track. After a 6 year stint with other projects (the bass player joined the Get Up Kids, the keyboard player joined Reggie and the Full Effect), the band released a live DVD. About six months ago they released their newest studio album in 10 years, Ox. They've come a long ways, and the new material is a sum of their parts. 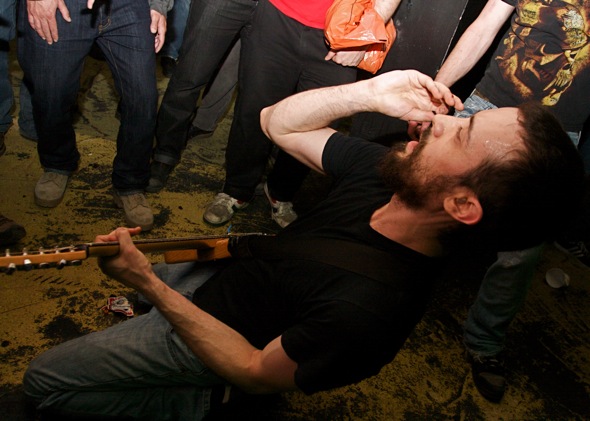 They're insanely heavym and Sean Ingram's vocals are beyond reproach. I seriously love the modified megaphone he uses sporadically; it's such a great effect, and it just sounds so badass. 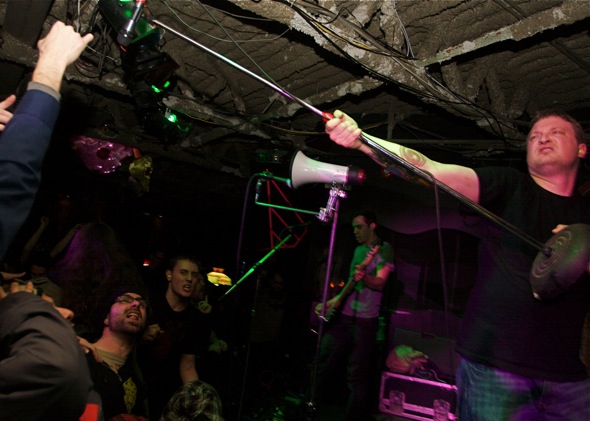 The band celebrated their first Toronto show in a decade by playing for well over an hour, and halfway through the set they started taking requests. It was wild in that room. I found out later on that my shoe had been slowly filling with blood, and it didn't even mar the night for me. 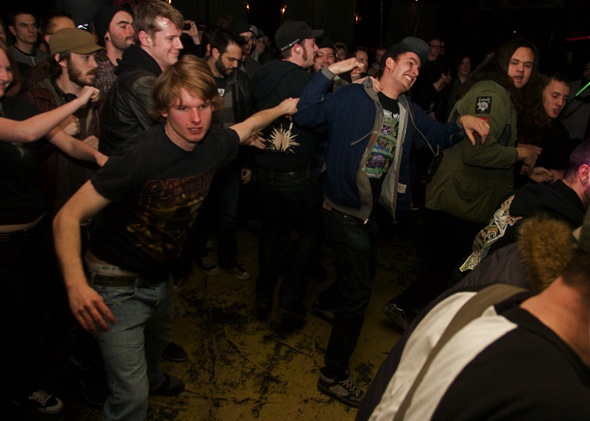 Burning Love (who I unfortunately missed due to the headache that is the Dufferin bus) are right up there on my list of favorite Toronto bands. Former Cursed singer, Chris Colohan leads up the frenzied cast of miscreants who pummel the living hell out of your eardrums. 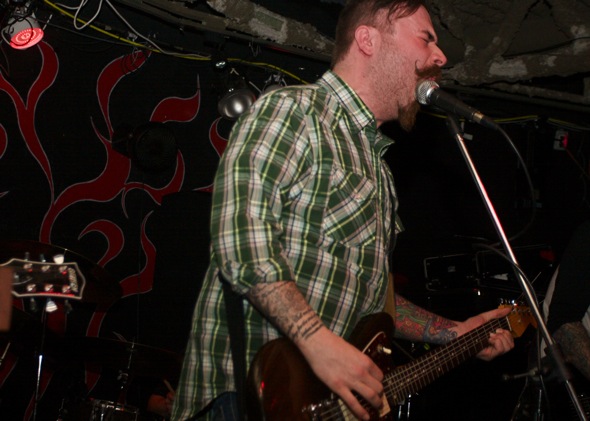 Then there was Chicago's Atlas Sound. I tried really really hard to get into them, and at times I was right on the edge. But it was just a bit too Alexisonfire for me. And I know all the jazz about how brilliant Dallas Green is -- but I'm sorry, I grew up in the Niagara Region listening to that crap before it was smeared all over the radio. Didn't like it then, sure don't like it now. The singer's got a super wicked falsetto scream though, I really liked that. 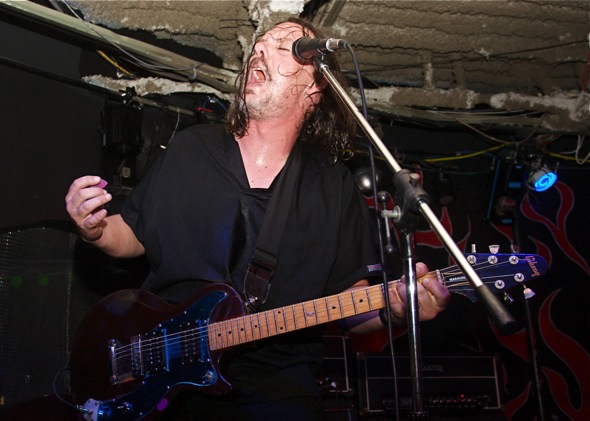 Other than Coalesce, the major draw last night was Harvey Milk. Another 90's era legendary hardcore band. From Athens, Georgia, the band was mostly unknown until the mid-90s.

They disbanded for about 6 years, as well. They played a technically top-notch show last night, and parts of it were really great and I was right into it for the most part. But they kind of ran around a few different sounds; the first part of the set was straight-up sludge doom metal (similar to the Hidden Hand or Saint Vitus).

Really minimalist and heavy on the bass drums and crash cymbals. The last song was a confusing bout of white boy blues, that if I only heard and didn't see, I would have thought was some strange metal version of a Johnny Winter song. 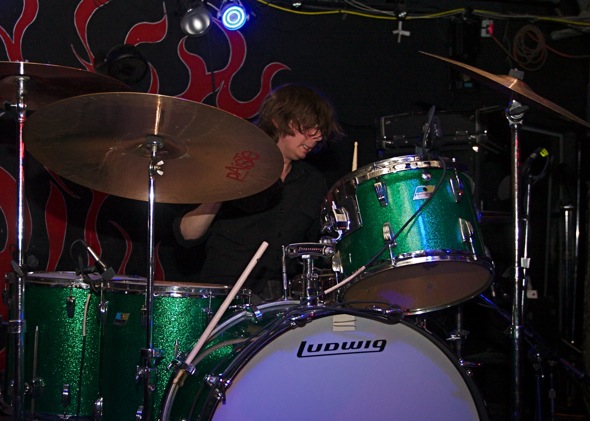 But it was still rad to see them. Their album My Love is Higher Than Your Assessment of What my Love Could Be remains as a testament to what American Hardcore music was doing in the early 90s. This is made obvious by the last song off that album, "All the Live Long Day". Severely de-tuned guitars and a hollow howl that sounds like something coming out of CAMH. The fact that singer Creston Spiers was wearing what looked to be hospital scrubs only drove that point home.

It was also interesting to see Kyle Spense drumming in his original band, after he played with Dinosuar Jr. recently when Dino's drummer Mitch was denied entry to Canada last month. I didn't even make that connection really until one of the friendly staff from Sonic Boom who was at the show on his break brought it to my attention. 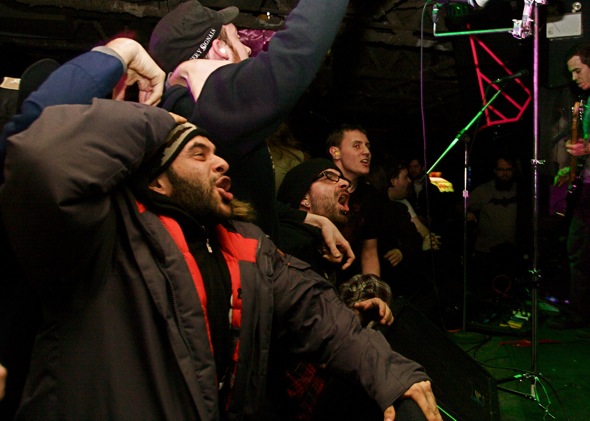 In the end, I'm really glad I went to this show. Coalesce were awesome. It made me excited for the rest of the Canadian Music Fest shows I want to check out, like Black Feelings/Hoa Hoa's Saturday night at the Silver Dollar, and Woods Sunday night at the Horseshoe. Then it's off to sunny Texas for South By Southwest!

For more photos check out my photo blog