Canadian Music Fest enters its 28th year, taking over 45 venues across the city from March 10-14. Formerly known as Canadian Music Week, the five-day festival offers a look at hundreds of up-and-coming acts from across the country as well as a few international artists.

Check out our top three picks for each night of the festival.

WEDNESDAY MARCH 10
Venue: Lee's Palace / 529 Bloor St W / Doors: 8pm
Artists: Jason Collett, Zeus and Bahamas will kick off night one of CMF with the lone Toronto date on their Bonfire Ball revue tour. After a few more stops in Ontario, they'll take the revue south for a date in Mexico City and four shows during SXSW in Texas. Originally serving as Collett's backing band, Zeus recently stepped out on their own with the release of their debut full length Say Us.

Venue: El Mocambo / 464 Spadina Ave / Doors: 8pm
Artists: For those in the mood for something a little more abrasive, the Elmo will be packed for Lifestory Monologue (9pm), The Black Swan Effect (10pm), Bastard Child Death Cult (11pm), Tropics (12am) and Polaris-winning hardcore titans Fucked Up (1am). Guaranteed to be a messy show.

Venue: The Roosevelt Room / 2 Drummond Place / Doors: 8pm
Artists: Eye Weekly will be throwing an opening party for CMF catering towards the electro-inclined with performances from Styrofoam Ones (9pm), DVAS (10pm), Parallels (11pm) and CFCF (12am).

THURSDAY MARCH 11
Venue: Mod Club Theatre / 722 College St / Doors: 8pm
Artists: In association with REMG, Mymanhenri (8pm), Break Science (9pm), Happy Chichester will open up for acclaimed electronic producer and musician RJD2 (11pm). Fresh off the January release of his fourth full-length The Colossus, RJD2's music has been featured in everything from video games to commercials and TV shows, most notably as the theme for the massively successful series Mad Men. 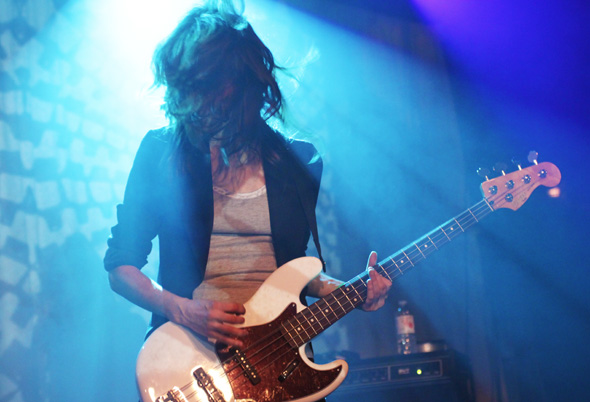 FRIDAY MARCH 12
Venue: Lee's Palace / 529 Bloor St W / Doors: 8:30pm
Artists: Co-presented by Chromewaves, the Billions Showcase boasts a stacked line-up with performances from Winter Gloves (9pm), The Russian Futurists (10pm), The Acorn (11pm), Montreal's Plants and Animals (12am) and Think About Life (1am), and a late-night headline appearance from Oklahoma's The Uglysuit (2am).

Venue: The Music Gallery / 197 John St / Doors: 7pm
Artists: Hand Drawn Dracula shows off their impressive roster with a showcase at the The Music Gallery where sets from Julie Fader (7:30pm), Brian Borcherdt (8:15pm) and Postdata (9pm) will only be enhanced by the amazing acoustics of the venue.

Venue: The Horseshoe Tavern / 370 Queen St W / Doors: 8pm
Artists: Night three of the Chart Attack showcase is packed with seven bands, starting off with Yukon Blonde (8:30pm) followed by The Balconies (9:20pm), The Beauties (10:10pm), The Wooden Sky (11:10pm), Two Hours Traffic (12:10am), The Junction (1:20am) and The Stanfields (2:20am). Make sure to get there early, because nothing says CMF more than the sweaty, beer-soaked sauna that is the Horseshoe Tavern at maximum capacity.

SUNDAY MARCH 14
Venue: Phoenix Concert Theatre / 410 Sherbourne St / Doors: 7pm
Artists: The Phoenix hosts Montreal's Parlovr (8pm), Hamilton's Young Rival (9pm) and Midland's Born Ruffians (10pm). While we'll have to wait until June 1 to hear their sophomore effort Say It in its entirety, perhaps the Ruffians will give us a preview of things to come at their CMF appearance on Sunday night. Check out the first single from the album - 'Sole Brother' (MP3 via Filter).

Check out the full schedule here.

Festival wristbands are available for single days ($30) or the full five-day festival ($60). VIP passes will set you back $150, but give you priority access as well as meet-and-greet opportunities and front-of-the-line access to the 10th annual Indies.

Wristbands and tickets are available for individual shows through Canadianmusicfest.com, Rotate This, Soundscapes and the dreaded, last-resort option of Ticketmaster.

Photos of Constantines and The Russian Futurists by Matthew McAndrew.