Scarlet-clad sweetheart Tessandra, otherwise known as Sady T, will give you all the sax without the sass. I spotted this TTC busker performing against the harsh breezes and billowing crowds at Union station.

In the short time I spent getting to know Sady T, I was able to come to one conclusion: this is a character who won't let anyone -- and I mean anyone -- cramp her style.

Tell me a bit about yourself. Who is Sady T?

I've been a musician now for over 30 years, full-time. My music career started because I began managing a young Brazilian who was a musician here in Canada. In 1976, we went to Brazil to find his parents. While we were there, the Brazilian government passed a new law not allowing any citizens to leave the country. So he was caught in the law.

I chose to stay, and we worked our way from Manaus down to Rio de Janeiro. Surprisingly, the record company that we signed with as songwriters really enjoyed my voice and I became a "star" in Brazil. We stayed there for two years.

When we returned to Canada, he unfortunately came down with a fatal illness, and I dropped of music for a while and dropped back in with the intent to teach. Teaching just never happened.

How long have you been playing the saxophone?

I'd spent most of my career singing, and I was 31 at the time that I went to audition for a band. When I walked in, the bandmates all looked at me. Before I could open my mouth, they said, "Don't bother, you're too old." That one statement changed my life.

On the way home, I was walking past Richmond's Trading Post on Church Street. There was a beat-up little alto saxophone in the window. I looked through the window, and I still remember saying out loud, "Oh, you're so ugly, no one will want you either."

I went in to buy it with the intent of putting a plant in it and putting it up on my wall, in memory of my jazz mentor, who was a saxophonist. When I got home, no one was there, so I decided to pretend to be him, for a moment. To my shock, I just started playing the saxophone.

So, [to answer your question] a little under 20 years now. 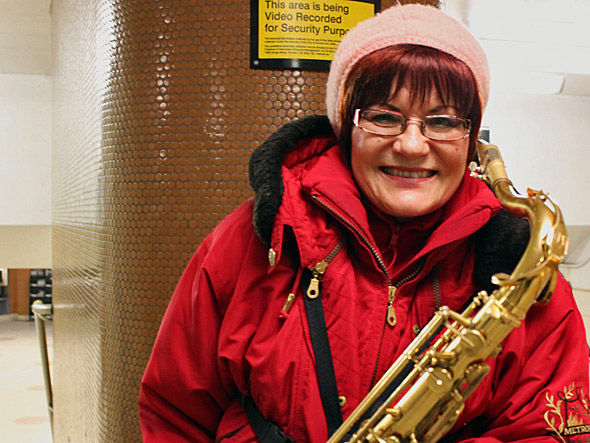 Does your instrument have a name?

No, I've never named her. But she's definitely a she.

How did the name "Sady T" come about?

As I went to jams, all my friends became enemies because they thought I wouldn't make it at my age. A few supportive folks started calling me Saxy Sady (after the Beatles song), and the name caught on. I added the T so that I would remember who I really am, and Sady T became my stage name.

I've heard from others who've seen you around that you're always wearing red. Is red your favourite colour?

Red or pink. They're just very vibrant colours that my eyes like. I love mixing the two.

Which of the songs you play are popular among the TTC crowds?

Surprisingly, one of the absolute favourites is Stranger on the Shore. Sentimental Journey and Fly Me to the Moon are two songs my saxophone really loves, so those tend to be my warm-up songs.

I busk because I live in a small apartment, where I can't play the saxophone six to eight hours a day. So I go out. I've been a TTC busker for three years. Also, I love playing for children. Especially for a child who's never seen a saxaphone before. I love it when a parent just gives them a moment to listen and look.

Can you tell me a bit about the other acts you are involved in outside of TTC busking?

Splish Splash is the name of my 50's and 60's act. Rich Country is my country act with Rick Spyder, for which I sing a lot of Patsy Klein and the like, and he takes care of the Marty Robbins, Johnny Cash types.

Sax in the City is my favourite. I work with guitarist Keith Dindayal. Together, we perform a variety of everything -- jazz, 50's and 60's, Motown, Caribbean music. Keith also was the bassist for the Ink Spots.

I've heard complaints from TTC buskers about how people mistake them for panhandlers. Does it bother you?

People will see the buggy I use to carry my saxophone, and think I am homeless. But I am a street performer. There is a huge difference between a street performer and a street person. I understand that people don't understand, but I try to take a moment to educate them. I've gotten to know many of the homeless in the downtown core, and I respect that they try every day to stay alive.

I just met a gentleman who is actually a sissy. I had no idea that this existed, but there is apparently a Petticoat Society where the men wear petticoats and chastity belts. He stopped to speak to me, and I found him to be very entertaining. It turned out he was a singer. The man had an incredible operatic voice. He is probably the most interesting person that I've met.

A young lady gave me a rhinestone cross necklace. I still wear it. It's very, very, pretty, and I was very surprised.