"It's okay if we just move Daniel's stuff to the side," said Mel before heaving Daniel's pan flutes and equipment out of the way, and settling in with his own guitar, five harmonicas, foot tambourine, and two-string fretless foot bass.

He then proceeded to perform most of his instruments simultaneously.

A bemused Daniel returned shortly after, and the two exchanged a handshake and a few words. To my surprise, it was Daniel who packed up his stuff and moved to a different busking location, smiling at me as I continued to shoot the video of Mel's performance.

As it turned out, Mel Harrietha himself was full of amazing surprises. 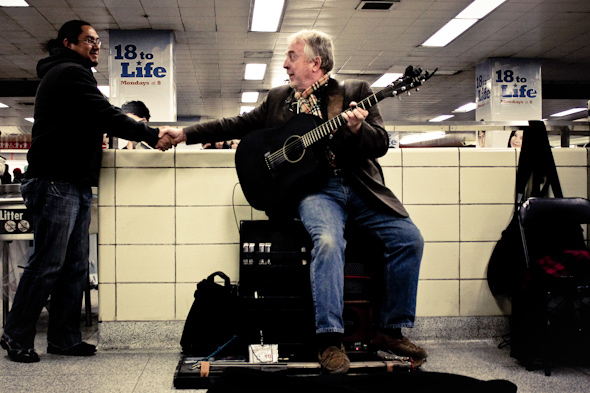 Daniel? Oh, yeah, I've known Daniel for many years, and we accommodate each other. I'm usually here on Thursday afternoons, so he figured I'd be here to look after his stuff anyway.

Recently, I've noticed some buskers who normally play as solo acts pairing up when they perform. How often do TTC buskers get to socialize with one another like that?

Not all that much. I tend to be around mostly Spanish guys, and people who are out playing fairly often in the downtown core. Some people prefer to stay in the west, east, or north end of the subway system, and I don't do much of that. But we buskers do run across each other a lot if we're in the system.

So, tell me a bit about yourself. Who is Mel Harrietha and what does he do?

Well, my name is Mel Harrietha. That's a Basque name. Our family originated from the Basque Country in northern Spain along the Bay of Biscay, and came here a couple of generations ago. I was born in Nova Scotia, grew up there, and left when I was 16. Most of my life I've made most of my living making music. I've been playing for 50 years now.

The first time I met you, you briefly mentioned that your hand was paralyzed. How did that happen?

My right ring finger and small finger are still partially paralyzed. I can't write. The only thing I can really do now is hold a guitar pick; for all other things, I'm left-handed. In 2001, my arm went totally paralyzed from degenerative osteoarthritis, hanging uselessly by my side.

The actual injury I received while I was in the military as a boy soldier with the Nova Scotia Highlanders. I took an impact injury that saved another soldier's life. Things went wrong, but if I hadn't been hurt, the other fellow would've been killed. 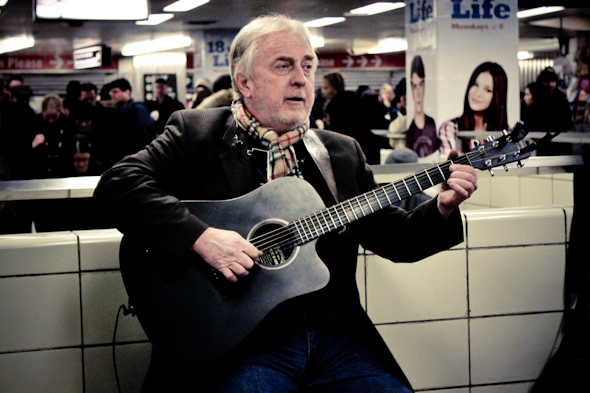 My injury ended my music career at the time. I couldn't even feel a guitar pick in my hand, and it just kept dropping out and I wouldn't realize it. My agent got mad at me and I lost all my contacts, so I spent the next two years working on my arm. It was a lot of prayer, meditation, and work. My doctor said, "If you can get your guitar playing back, that's the best therapy we can give you." Everything else, I really didn't care very much about.

Five years ago, I'd gotten my hand working enough to hold a guitar pick, and I thought, "What the heck, I'll audition for a TTC busking spot. The worst that could happen is that I get a free trip to the CNE." I'd tried a few times before but had never made it. Surprisingly, this time I did, and I've been in ever since.

It doesn't really matter what I play, it's going to have a Spanish feel. My name is Harrietha. It's Spanish blood. Even when I play blues. I've played rock and roll, jazz, blues, country.

I'm a university student at Ryerson University. I'm hopefully finishing my Business Administration and Information Management degree this term, and graduating in June, at the next commencement.

I'm the last AIM student at Ryerson. At the time that I started the AIM program, it was the most technical of all the degrees Ryerson had to offer. I had already gotten a Systems Programming certificate from Ryerson, so I've been going to Ryerson since 1991. They really want to be rid of me. I'm on a long-term extension.

I got a little toy car that some kid came and gave to me a couple years back. I've still got it. And people will put in foreign money all the time.

There's an old lady who always puts in food. I don't know if you've seen her. She goes through the subway and it looks like she's picking through the garbage, but she's not. She's arranging the garbage and recycling bins so that things are sorted properly. People do nice things all the time.