One chilly day at Don Mills station, my ears perked up at a sound I hadn't yet come across in my TTC busker hunting adventures. I approached Stephanie "Emerald" Doyle with mounting excitement. A subway pianist!

But as I drew closer, I realized she was much more than that. Her hauntingly delicate voice was just audible above the tidy chords emanating from her modest Yamaha keyboard setup.

I decided to have a short chat with Emerald and uncover a little more about this underground busking gem.

Tell me a bit about yourself. Who is Emerald Doyle?

Well, "Emerald" is just a pseudonym from when I first started out. I didn't want to use my real name. I was still just finishing university and working, and I wanted to keep my arts life separate.

Why "Emerald" in particular?

My last name is Doyle, and I've always liked the colour green. I thought, "Oh, that sounds kind of Irish, kind of fun."

How long have you been playing piano and singing?

I've been playing piano since I was 12 or 13. I have my Grade Eight RCM certification. I've always been singing -- my mom was a choir director. When I went to university, I studied music. I played piano, but it was mandatory for all the music students to be part of a choir. After that, I just continued because I enjoyed it.

Why did you become a TTC busker? How long have you been one?

I just saw [an ad for] it in the paper and I thought it looked different, and kind of neat. I thought, "If I get in, great." It was very much a fluke. Now I'm entering my second year as a TTC busker... yeah, I'm still a newbie.

Can you describe to me what the TTC busker audition process was like for you?

You have to apply, and they only accept up to 175 applications. After that, there's a cutoff. So you have to be on time to get your application in. After you do that, they send you a letter. You get a number and a time, and you have to go to the CNE to audition. You have to prepare a minimum of three songs and play for a maximum of seven minutes.

For me, I just thought I'd give them a sample of what I would do -- French and English songs. I tried to keep it short and sweet. Usually judges will know right off the bat if they like you or not.

Have you always been singing in both French and English?

The French stuff only came later. I've only been singing in French for about three or four years. My dad's from Quebec, and my mom's from northern Ontario. My mom's Franco-Ontarian and my dad's Quebecois. But I'm from Sudbury.

I would say I'm kind of pop-contemporary. I'm kind of all over the map. I usually play songs that I like. I welcome requests -- that's the best way of widening your horizons musically. I've gotten everything from Happy Birthday to Italian songs and jazz standards...from Cat Stevens to classical.

I write them all down, too. I find it really interesting covering all these other genres. I looked up the Italian request and thought, "Why not? Let's give it a try; it might work." 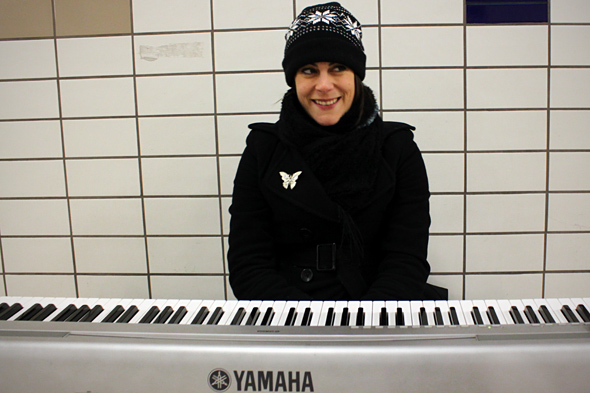 I like the piano keys tin you use to collect when you busk. Can you tell me a little about it?

The cookie tin was actually a gift from my fiancĂŠ at the time. He found it for me on Palmerston Blvd. and I always kept it. When I got accepted as a busker, I thought it was cute and it matched what I was doing.

What about the piano you use?

I just wanted something light and with weighted keys, so that I could at least have a sense of a real piano. It just happened to be a Yamaha. The most important thing was that it was portable.

What are some of the challenges you experience as a vocalist busking in the TTC?

In the winter months, the cold air doesn't benefit the vocal cords. Another thing is that some stations don't have really good acoustics. Some instrumentalists don't like to play at Spadina station because there's too much echo. For me, I love it because the sound really soars. You have all this extra reverb.

Also, when there are a lot of people, it really cuts out your projection. So if you don't have the right acoustics, combined with a dense wall of people walking by, your voice can't carry as loudly or as far as you would like. But I keep thinking that for those people who can hear it, if it touches them in some way or another, more power to me I guess.

What's the most fulfilling thing about your busking?

I really like it when I haven't been at a certain station for a while and people come up to me saying, "Where have you been?" It's almost like "the piano girl" has to be there because it's become part of their morning and their routine. That makes me really happy...when I'm missed.

Who are some of your musical inspirations?

I'm a big fan of Ben Folds. Have you seen him in concert? He's sick! I love him. I thought to myself, "Oh, one day I wanna meet you!" I just worship him. But I also like Tori Amos and Kate Bush as well.

I teach at a studio twice a week. And I do my own thing. Working out, baking, seeing friends, and just having fun. I get hired out for private functions. I have a gig in Hamilton at the end of February for the International French Film Festival. I played it last year, and they asked me back. I performed on opening night.

What kinds of people have you had stop and talk to you?

I've had people come up to me with tears in their eyes, saying that a song I played was their late wife's favourite song. Other people have come up asking about music lessons or about hiring me for funerals. I once had a girl come up to me who said she wanted to have music lessons, but then it turned out that she wanted me to sing for her father who had just suffered a stroke and was on his deathbed. Two days later, he died, and she wanted me to play at the wake, and I thought, "This is messed up."

And then you get other people, like this guy from Thunder Bay who seemed cool at first. He asked me if I knew this old tune. People usually just start chatting with me like that. This guy seemed normal until I asked him why he'd moved from Thunder Bay. "Because I had a mannequin that was possessed and I had to run away from it!" he responded. You get all sorts.

Well, there was one guy; I'm pretty sure he was on coke. He just thought the French was amazing, and he dropped down and started doing pushups in front of me, saying, "That's just fantastic!" I was like, "Oh, gee, whatever works for ya." But nothing over the top, really. Not yet, anyway.

What's the most interesting thing you've had dropped into your tin while you were busking?

I've had chocolates. I have a photo of a kid in Grade Eight that I still have in my wallet because it really made me laugh. Fifty bucks is always nice, too.